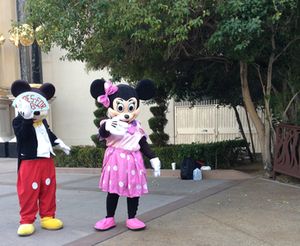 Welcome to The Strip

What, might you think, are Mickey and Minnie Mouse doing along The Strip, outside one of Las Vegas’ last-century luxury hotels, Treasure Island?  Well, walking along The Strip is not straightforward in any sense, as the gal found.  Years ago you simply walked straight, parallel to Las Vegas Boulevard, the road that is The Strip.  Now there is a divider all the way down its centre, and no crossing places.  You have to get over it via high-set walkways that take you west-east over The Strip, and also north-south over its cross streets. Even at ground level, you often have to divert inland, around obstacles.  Along the way you encounter all kinds of odd bods, not all of them tourists. 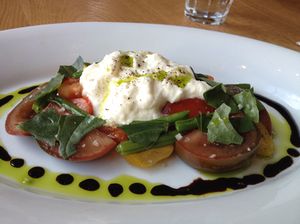 I was desperate to arrive on time for lunch with the top female restaurant conceptor, at least in the USA and arguably in the world, Elizabeth Blau.  We were to meet at the three-month old Buddy V’s in the Grande Shoppes of The Venetian.  It looked like a quick hike north from Mandarin Oriental Las Vegas but it took more than twice as long as anticipated (of course, yes you guessed it, I eschewed the elevators and escalators at all the road over-bridges in favour of steps).  Anyway, get there and I had one of the best capreses I remember.  All the recipes come from the family of Bartolo (Buddy) Valstro, a baker from Hoboken NJ whose cable cook shows have over 200 million viewers around the world. 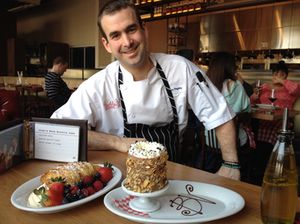 Bryan Forgione with a lobster tail dessert, left, and an individual wedding cake

This is the first Buddy V’s restaurant and Elizabeth Blau and her team worked with New York-based designer Vincent Pelano.  It is really folksy, big windows, brick walls hung with family photographs and floral trays, and lots of red and white checked napkins to go with plain wood tables, and a big open kitchen that is overseen by chef Bryan Forgione. He came out to talk.  His father, Larry Forgione, who started An American Place restaurant back in 1983, is called the godfather of American cuisine, and Bryan’s brother Forge has his own eponymous New York restaurant, Restaurant Marc Forgione.  Elizabeth Blau says today people want real food, comfort food.  The days of entertainment are over 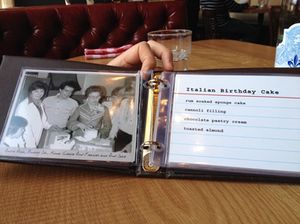 Real food is certainly what you have here, at Buddy V’s. The dessert menu is like a family photo album, showing gatherings of assorted parents, uncles and aunts and cousins.  We had a couple of the most famous dessert, a ‘lobster tail’ of puff pastry strips over a cream mass, and an individual Italian wedding cake, like a decorated rum baba.  Calorie count goes out of the window here (Elizabeth Blau’s main course, interestingly, was simply steamed vegetables, but then she has a lot of eating trials to do).  We talked about Stock, her brilliant restaurant at Trump Toronto, and what she is doing at the new look Rainbow Room, re-opening in New York later this year. 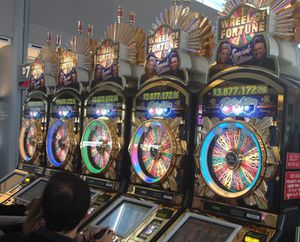 Some need a fix even at the airport…

And then it was back to Las Vegas’ McCarron International Airport.  This has the great advantage of being within ten minutes’ drive of both the city’s non-gaming luxury hotels, the Four Seasons and Mandarin Oriental.  It has the challenge, however, of being impeded, obstacle course-like, by banks of slot machines.  Some people just cannot have enough of the things, although I am told that an increasing number of the 39.7 million annual visitors to Las Vegas come for dining, spectacular entertainment and conferences (4.9 million) rather than the casino side. 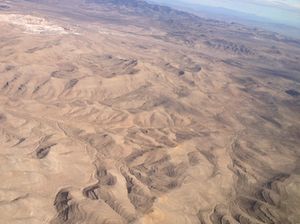 .. and then it is quickly up and away, over the Nevada desert

One tip to anyone about to leave Las Vegas on American Airlines.  Stay in your luxury hotel – Four Seasons or Mandarin Oriental – as long as you can as the airline has no lounge.  There is an American Express lounge but despite my black card they wanted $50 entrance.  Stuff it. I bought a cappuccino at Starbuck’s and sat and worked, using the airport’s terminal-wide free WiFi, boarded and the 737-800 took off, and within minutes we were over the rugged Nevada desert, with thoughts of Mickey and Minnie and their ilk far behind.