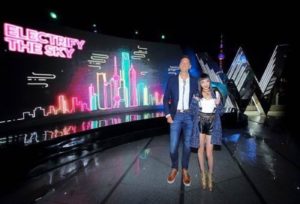 W Hotels Worldwide, part of Marriott International, premiere of W Shanghai – The Bund with an opening party for a thousand, themed as ‘Captivating Contrasts’. Centre of stage was Chinese rapper VAVA, who debuted a song, ‘Happy Everyday’, inspired by the passions of the W brand – it is from her yet-to-be-released album (VAVA is seen left, with Anthony Ingham, Global Brand Leader, W Hotels Worldwide).   VAVA has close to a million followers on her social platform and she is a true trailblazer in the thriving female rap scene in China: she rose to fame through The Rap of China TV show, since when she has been credited with propelling Chinese hip hop mainstream.

Thanks to the uniquely curved frame of the building’s edifice, nearly all the 374 guestrooms at W Shanghai – The Bund have views of the Huangpu River. Designed by G.A Design, led by Werner Aeberhard and his son Jonathan, the hotel showcases both historic and modern influences, such as Hai Pai – the art of combining the old and the new, East and West.  Old and new is also shown in the ten foot-high Xiaolongbao bicycle art, reflecting the way Shanghainese in the past – and still sometimes today – transport goods. This bicycle art is travelling around several W Hotels in Asia, plus London and New York, showcasing Shanghai food delicacies as well as the splendid new W Shanghai – The Bund luxury hotel.