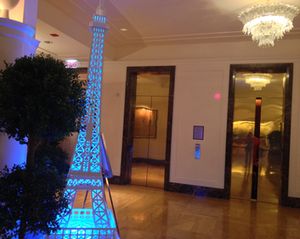 Every Peninsula hotel is currently supporting the opening, August 1st, 2014, of The Peninsula Paris (when the world’s largest hotel company, IHG, opens its 4,654th hotel none of the others turns a hair and, anyway, their databases are updated automatically). Arrive at the uber-luxury Peninsula Chicago hotel and the bay trees by the pair of stone lions outside the main door on East Superior are gently swathed in red, white and blue ribbons, with a big sign ‘Vive La France’. Up at the main reception-lobby area, the gal is greeted by this version of the Eiffel Tower. 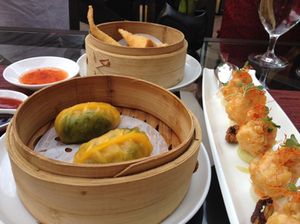 Dim sum on the Shanghai Terrace

But some things have not changed. The Shanghai Terrace – which in winter becomes an ice-skating rink – is open, summer-long, serving yummy dim sum, chicken salad Chinese style, and other goodies. This is Zagat’s best Chinese food in Chicago. Eighty per cent of diners in all three of the hotel’s restaurants are non-hotel guests, testament to the reputation of the food everywhere. They, the locals, would not have a chance of seeing the Vietnamese spring rolls I had as a welcome, with near-transparent dough wrapped vertically around exactly-cut lengths of asparagus, beans and carrots, each roll topped with, say, a beetroot chip. 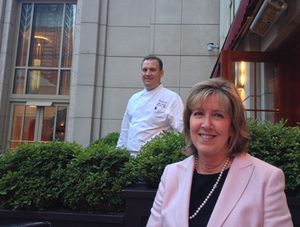 Maria Razumich-Zec, who heads Peninsula for the USA, dined at Shanghai Terrace with friends (nearby, a Republican cocktail was having a good time, and since the Democratic mayor, Rahm Emanuel, breakfasted in the Lobby Lounge that morning, it shows how non-partisan this hotel is). Next Friday, August 15th, 2014, she will be at Quail Lodge in Carmel CA, which is Peninsula-managed. That is the day of The Quail, A Motorsports Gathering, themed for the centenary of Maserati. Among the myriad of events is the annual Bonhams Motorcar Auction. At least 5,000 enthusiasts, many with their credit cards – black, I suppose – will be milling around, looking for bargains. 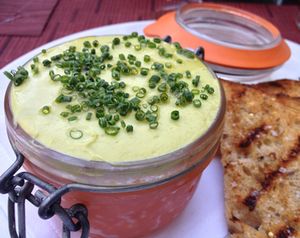 The Quail, A Motorsports Gathering is part of the whole week-long Pebble Beach Concours d’Elegance, culminating August 17th, 2014. Over the preceding days, there will be oohing and aahing at the vehicles, and endless tastings of culinary delights. But I bet nothing will surpass the avocado and omega-3 egg-topped salmon tartare, in a kilner jar, from The Peninsula Chicago’s Lobby Lounge, which has a Michelin star. Question for self, how many luxury hotels’ lobbies around the world have Michelin stars?