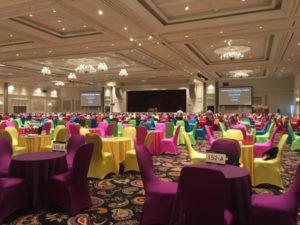 Monday to Thursday at the 29th Virtuoso Travel Week was the really HARD WORK. Mornings clocked up a total of 327,124 speed-dating sessions, with 2,700 travel advisors sitting while GMs and others representing hotels, and other products, nipped around trying to differentiate themselves in four minutes. This can be quite difficult when you sometimes have to explain first where Chengdu is, said Temple House’s Kurt Macher, but others find savvy educational tools to use. Pierre Bord, who runs the Negresco in Nice, came with an outsize pack of playing cards, each showing something to do with that luxury hotel – he is photographed as the joker, while there are cards showing the new bathrooms, and the Michelin-starred Chantecler restaurant and so on. The meeting rooms are extremely colourful, and it is so brilliantly organised that you really do not get lost, says the gal. 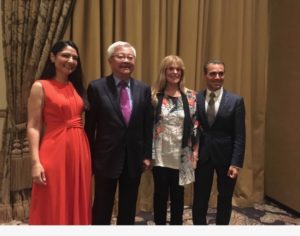 The 76 media invited this year had a separate programme some of the time, and there was a trial speed-dating afternoon for those who had not done it before. One of the most useful sessions was a panel led, as if at Carnegie Hall, by Virtuoso’s versatile hotels guru, Albert Herrera. He was conducting the independent hotel theme, and his panel included, on the left of the photo, Deborah Yager Fleming, Acqualina, and Ted Teng, Leading Hotels of the World. Ovation Travel’s Jack Ezon, a former attorney (on the right of the photo), pointed out that a one-off independent property does not have to concentrate on appealing to the locale as it is local. And then the media were all rounded up and put in buses for the ride along to lunch hosted by One&Only in the Alain Ducasse Rivea, on the 56th floor of the Delano, a marsupial-like hotel tucked into the Mandalay Bay integrated resort. 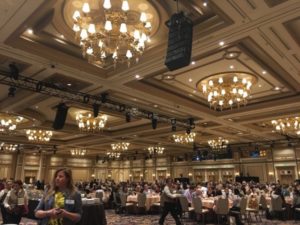 Feeding the (more than) five thousand

Lunch for the main number of the nearly-6,000 attendees was back at Bellagio, another of their splendid buffets, which never run out of seating, food, and drink – I spoke at length with the Bellagio’s GM, Olivia Brown, who looks about 16 but she is in fact the mother of 14-year old twins, brought up since birth by her husband. She confirmed that the entire organisation of Virtuoso Travel Week is like a military operation, with every detail planned minutely, with deviations continuously at the ready (although timing was so exact it seemed like clockwork). Unlike army situations however, a very civilian tender loving care comes into play, with special lunches for all 8,200 Bellagio staff members while the week continues. 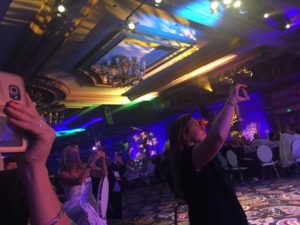 They also turn rooms round in lightning time. They had only three hours to change what had been a speed-dating ballroom into a magic setting for Monday night’s Destination Showcase dinner for 2,000. Tables are, immediately beforehand, meticulously dressed by their hosts, who could be nations, areas, or cruise ships – see a Portugal table, above. Crystal Cruises sponsored the welcome cocktails, and of course that company’s livewire President/CEO Edie Rodriguez, tonight in a black top and a full-length emerald satin skirt, welcomed everyone, as if impromptu with not a note in sight. Albert Herrera, master of ceremonies as always, later invited Virtuoso Chairman/CEO Matthew Upchurch to present awards, chosen by the assembled advisors: these included Tourism New Zealand which won best destination marketing for the third year NOW SEE A VIDEO OF ONE OF THAT DINNER’S THREE ENTERTAINMENTS