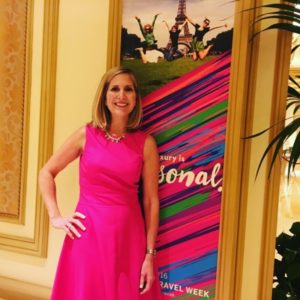 Last week was Virtuoso’s annual Travel Week, when 5,257 top travel professionals, all at luxury level, descended on Las Vegas. Now the city is used to such events, but, even so, this is particularly important because Bellagio, the host hotel, is strutting its stuff to its peers. But not only was it superlative this year, but it was better than ever. Rooms are immaculately set up for the speed-dating that goes on between travel advisors, who stay put, and suppliers (luxury hotels, cruise companies, private jets and so on) who move around, clocking up miles and miles over the four days. This year’s theme, says the gal, was Virtuoso Luxury Is Personal, and it was, well, colourful. Look at the logo, left, behind Misty Ewing Belles, who, as MD Global Public Relations, keeps the pinnacle of the press in order during this eventful occasion. 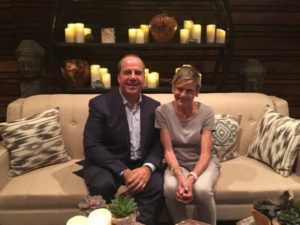 Matthew Upchurch in his zen den

A team of people in fact works year-round to make it a success. Before the main opening session starts on the Sunday – this year August 7th, 2016 – Virtuoso organisers have moved in at least a week ahead. Niche sectors start arriving early for educationals and workshops on cruises, say, and new this year, wellness. The guru who ultimately conducts this non-stop, multi-faceted orchestra of events is Matthew Upchurch, boss of the $15.5-billion Virtuoso network. This year his on-site office was a zen den into which a lot of foliage that looked extraordinarily like aspidistras had found its way.   He was seldom in the zen den, of course, he was far too busy networking – he makes a point of inviting absolutely fascinating people to add to the Virtuoso group (among his personal guests this year were Ted Turner’s daughter Laura Turner Seydel, her husband Rutherford Seydel II and their son John – Laura, eldest of the CNN boss’ five children, oversees his enormous wilderness lodge empire, Ted Turner Expeditions).  Matthew Upchurch also miraculously seemed to be able to attend an unlimited number of official events or sessions. 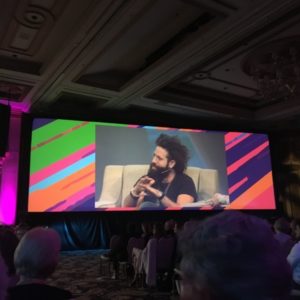 Back to the opening session. There is always a motivational speaker and this year Linda Kaplan Thaler stressed the need to be comfortable being uncomfortable. Among those who were also speaking, following her, were National Football League legend Ronnie Lott, and then, from the entertainment world, Elan Gale, who produced The Bachelor, The Bachelorette, Bachelor Pad and more, who came along with the delectable Molly Quinn. ‘The world needs educating in what a travel agents can do – it is life-changing, as you experience when walking into a hotel the other side of the world and they know your travel advisor’, said one, or the other. They themselves use Stacy Small, of Elite Traveler International, who from her new Maui base can orchestrate for her highly-select clients, anywhere. 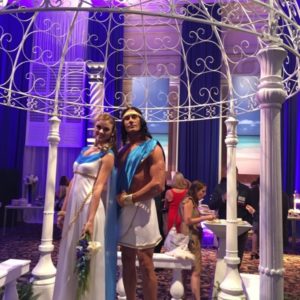 Participants at the opening cocktail

For four days, therefore, Monday through Thursday, there were lightning pace meetings during the daytime. Evenings were equally busy. Sunday, after the opening session, was a getting-to-know-you cocktail. Monday night was Destinations special, for awards chosen by Virtuoso advisors. For me, the official highlight event, however, was Wednesday’s Hotels Best of the Best celebrations (see the photo above, and the video below). Jose Silva, GM Four Seasons George V Paris, was awarded the signature, Best of the Best hotelier, and he was joined on the stage by previous winners, who included, in alphabetical order, Rainy Chan, The Peninsula Hong Kong; Karambir Kang, Taj Boston, and John Stauss, Four Seasons London. And the luxury hotel ‘to watch’ is The Eden, Rome, which Dorchester Collection re-opens early 2017. NOW WATCH A VIDEO OF WEDNESDAY’S ENTERTAINMENT