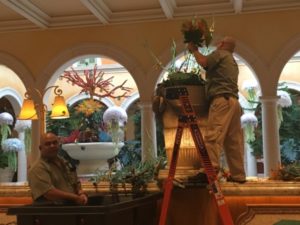 There are so many key people who make Virtuoso’s annual Travel Week in Las Vegas work. The hotels guru Albert Herrera – seen, above, in a rare time-to-breathe moment in his temporary office in Aria, Las Vegas – masterminds the great evening events (for the final Best of the Best dinner he was carried in on a palanquin by some of the Bellagio associates. And oh, the staff of Bellagio! This is a luxury hotel that has 3,933 bedrooms, and a total team of 8,200, led by two Canadians, Randy Morton, who came from Four Seasons, and Olivia Brown, lastly with Ritz-Carlton. Of course being a casino resort, Bellagio operates 24/7, but the gal’s favourite time is early morning, when the flowers are being redone, marble floors are polished and so on. 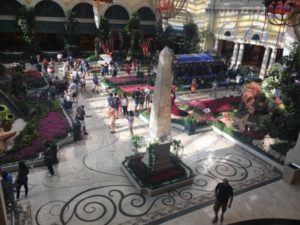 Looking down at Bellagio’s lobby garden

Coming out of the second floor gym at that hour I looked down at the lobby’s rather eccentric garden, which has a walk-through tunnel, with real fish in aquaria either side, and LED fish moving on the floor beneath. Later in the day you cannot see the displays here for people, thousands and thousands of them, just coming in, admiring and taking photos. Later on, too, the density of the crowds made getting to the private Virtuoso Travel Week parties, of which apparently there were 750, quite time-consuming. One guest arrived half an hour later for a really delightful sit-down dinner-for-nine in Todd English’s Olives, hosted by Butterfield & Robinson. In the main, parties are cocktails, come whenever, so timing is not so vital. 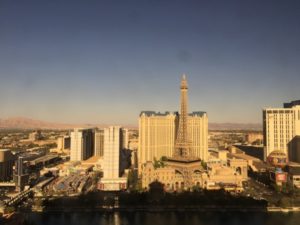 Look out, from The Jefferson, Halekulani, Corinthia London party

The Jefferson, in Washington DC, cleverly joined with Halekulani, in Honolulu, and The Corinthia London to host such a cocktail, in a bedroom suite looking right across Bellagio’s famous lake to the Parisian, Eiffel Tower and all (and of course the hotels’ Philip Wood, Uli Krauer and Thomas Fischer were there, knowing how important it is for travel advisors to know, and see, the big bosses). GG (Gillian Greenwood) had several InterCon GMs at her annual IHC party – it was a bit difficult to see who Belmond had as their party is always in the Bellagio’s Hyde nightclub, with fixed furniture and nocturnal lighting. One of the best events is always FRHI’s early-early breakfast, outside by the main Bellagio pool. 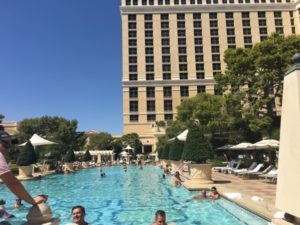 Along the pool, to Bellagio

Yes, they manage to get their chosen travel advisors to turn up at 6.15 a.m. on the first main day, Monday August 8th, 2016, for a seated breakfast, but everyone works on maximum adrenalin throughout this gathering of luxury hotel people and others in the super-experience travel industry. The pool, by the way, is a blessing – some participants even managed to sneak in a few minutes here and there to soak up the sun, and yes, it was hot, nudging 100 most days. When the sun came down it was refreshingly cool, which made ILTM’s annual poolside party on the Tuesday, even more enjoyable (see the video below). Adrenalin keeps on doing its job, fortunately, right through the week, though how many stayed until the 5 a.m. closing, Friday, of the two postscript Virtuoso Travel Week nightclubs? I was long since gone!  BUT DO NOW WATCH SIMON MAYLE STARRING, BELOW