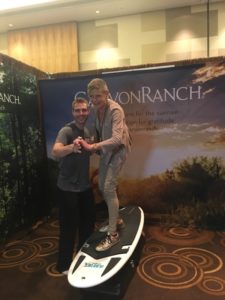 Try a fitness board?

Although some had already been at the most famous of all MGM’s luxury Las Vegas hotels, Bellagio, for a couple of days or more, the main Virtuoso Travel Week started Sunday, August 13th, 2017.

There were several prior events, including  Saturday’s gathering of ‘communities’, displays of and interaction with destinations that are heavily involved in, say, Family Travel. Over 1,200 Virtuoso travel advisors came into town early, especially for this exciting day.  You chose a theme, and also an area of the world.  The gal chose the Wellness community, Americas, and had a fascinating two hours moving from one to another and another, hotels and resorts that all stress at least one element of fitness. There was mindfulness here – see the image above – and an introduction to bee-keeping there, and so on. Canyon Ranch brought along an impossible piece of equipment, a surfboard for the land, tried on a carpet (left). 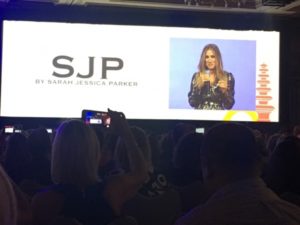 SJP live at the forum..

On the Sunday came the usual opening forum, 4.30 to 6.15 p.m. There were just enough chairs for all the just-under-6,000 delegates, but the sound and light were brilliant and it was possible to see the three big screens clearly right from the back of the mammoth ballroom. As everyone by now knows, SJP by Sarah Jessica Parker conveniently opened its Bellagio store that very day. There was a 40-yard line snaking round outside the store, to get in to see and try and shoes, and SJP was rumoured to be there in person. Sure enough, after the forum was officially opened she wandered in. She said only a few words before gliding out again on her high-high heels, naturally SJP label. 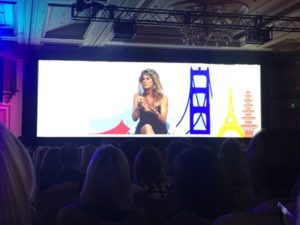 Next up was New Zealand actor-environmentalist and her country’s sustainability ambassador, Rachel Hunter, talking about her television Rachel Hunter’s Tour of Beauty for TV One – she travelled to 26 countries to discover what beauty means around the world. After her came sky-high Erik Qualman, author of Socialnomics, who seemed to have escaped from his Harvard office to sport dayglo-green glasses. He bluntly said human attention span is, at seven seconds, less than a goldfish’s but while tech changes the whole time human nature does not, clicks co-exist with bricks, Amazon is opening real stores, 90% prefer to read on paper – it is so much quicker. Finally, moving-art producer Louie Schwartzberg showed how the minutiae of wildlife can transcend technology. 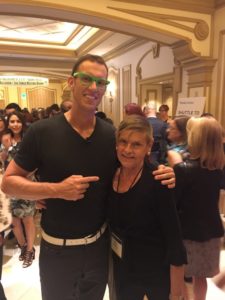 After that Bellagio hosted the first of what turned out to be a myriad of networking ‘parties’, though perhaps that deviates from the usual sense of the word as, frankly, Virtuoso Travel Week is HARD WORK. It has now grown so large that delegates stay, and meet, in MGM’s three main resorts. Some are based in Aria, others in Vdara, but I, fortunately, stayed as always in the 3,933-room Bellagio, where all the main parties are held. That Sunday, once the forum was over, we inched our way, at snail’s pace, to one of the luxury hotel’s massive ballrooms, transformed into a party venue with masses of networking corners. This is the opportunity for conversations with some but, as the show gets larger and larger, a simple raising of eyebrows and a smile and a wave as you pass…  But, as always, it is just truly impressive how Bellagio, led by GM Olivia Brown, who came from Ritz-Carlton, and InterContinental before that, works so magnificently. SEE A VIDEO WALKING INTO THE BELLAGIO CASINO, VIA A SHOPPING ARCADE, BELOW