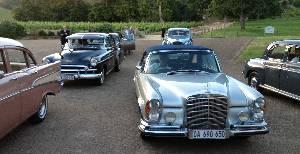 Final night galas at conferences are often more memorable at the beginning than at the end – by which time many are sleeping and some have gone home.  This year’s Leading Hotels of the World convention in Cape Town produced a Grade A final evening, from beginning to end. 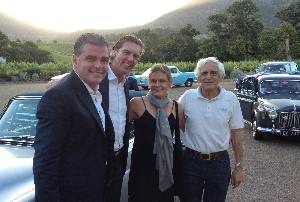 For a start, all 250 delegates, and the few wives, husbands and friends who came along, found themselves on a unique ride.  Everyone was picked up in a vintage car and driven the half-hour, through gorgeous vineyards on our way to Constantia, by the vehicles’ proud drivers.  Apparently they do this simply to share.  The gal thought it was brilliant.  Other cities, copy Cape Town.

I shared a 1969 Mercedes-Benz 300 SEL 6.3-litre with Omer Acar, from Paris, and Carsten Rath, from Zug.  Carsten has the longest legs I have ever seen other than in giraffesville, namely the Okavango Delta. He had somehow, typically, got in first, and pushed the front passenger seat back as far as possible. 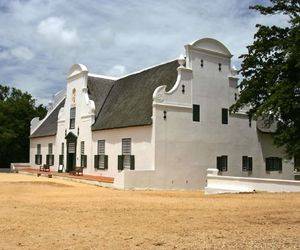 Omer and I climbed into the back and acted as sardines in a can, although actually the surroundings, well-polished black leather, were pretty well okay.  André du Toit, who owns this beauty, was our driver, and gave us a tourist detour on our way south.  His entire life is finding old vehicles, in garages of the deceased and the like, and doing them up.  We all wished that the half hour journey would last longer but…

Our destination was Groot Constantia Wine Estate.  The main house was finished 1685, in typical Cape Dutch style, by Simon van der Stal, an employee of the Dutch East India Company (who built the Castle of Good Hope).

It passed on from one Company person to another, a Swede called Oloff Bergh, a German called Carl Wieser, a Dutchman named Jan Serrurier and, by 1778, to the Cloete family, who owned it until the government took it over in 1885.  Since 1993 it has been governed by the Groot Constantia Trust, and run as a fully operational farm and wine production facility, plus being a highly popular tourist attraction. 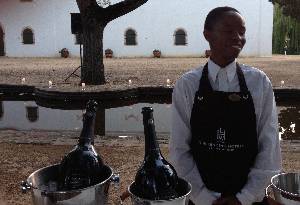 Laurent-Perrier was poured from magnums

The final gala was organized by Sherwin Banda, GM of Table Bay Hotel – where we had that fabulous brunch; Horst Frehse, GM of Twelve Apostles, where I stayed only a few days ago; Sandy Powell, GM Cape Grace, where I stayed during the Leading convention, and Michael Pownall, GM of Taj Cape Town, where I have stayed so many times.

As always, the gala would have been nothing without Laurent-Perrier. Jean-Christian de la Chevalerie, who heads events like these for the Laurent-Perrier brand, colleagues, we love you!  We were greeted in the grounds of Groot Constantia by glasses poured from magnums, which is jolly difficult to do.  Some ladies of course were in highest Louboutins or Manolos, tip-toeing over the pebbled walkways, equally difficult. 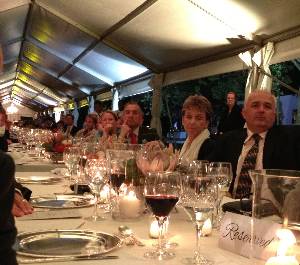 One long table accommodated over 300 diners

We then walked through the house itself, but there was no time to check its antiques as we emerged the other side to a big lawn which had a big open-sided tent, big enough to accommodate 300 diners, 150 each side.  I reckon everyone needs three feet of horizontal space to be able to manipulate knives and forks without poking one’s neighbours.

This means the table must have been 450 feet long.  The longest fixed table in the world that I have come across is at Taj’s magnificent Falaknuma Palace outside Hyderabad: its table, formed of seven wood trunks, is actually ‘only’ 108 feet long and seats 101, presumably closely side by side.

You could tell how long this Groot Constantia table was because Andrea Kracht, Chairman of Leading, stood at the  central podium to make a welcome speech, and when he pulled – well, figuratively – people up for awards it took them five minutes to reach him. There was a Living Legend award, in the form of a Blancpain watch, for Gunter Richter, now boss of The Setai, Miami, which had been such a spectacular GHM hotel when I was last there. 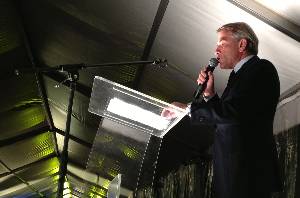 Andrea Kracht made a speech

Another watch, for Quality, went to the fabulous Splendido and its sister Splendido Mare hotel, in Portofino (when I was last at Orient-Express’ Splendido, it was a Sunday evening and yet its hyper-kinetic boss, Ermes De Megni, came in specially to give a lightning tour of this historic property, running at Usain Bolt speed – and after he left, I had a house favourite, spaghetti with tomato sauce named for a regular guest of the past, Elizabeth Taylor).

Ah food, yes we were here at the gala tent to eat.  Every course was cooked by a chef from a different Leading hotel in Cape Town.

This luxury dinner started with a Tartare tower of franschhoek trout and yellowfin tuna, prepared by Jocelyn Myers-Adams of Table Bay Hotel (the wine was Groot Constantia Sauvignon Blanc 2012). 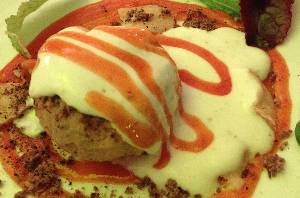 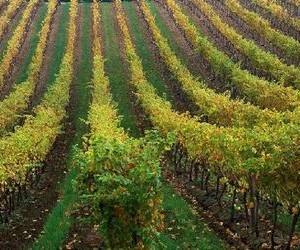 After that, if you could face it, there were cigars, and digestifs, and yet more networking.  The vintage cars had left, replaced by tourist buses, and we made our way back to whichever luxury hotel we were lucky enough to stay in.

It was dark of course, so we could not properly see the gorgeous Groot Constantia vineyards that had provided the grapes that made the wine that went into bottles to be poured at this truly memorable event…