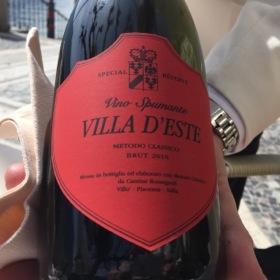 The hotel’s own sparkling

At twelve noon precisely first one and then the other bells toll on the two churches in Cernobbio, the tiny village on Lake Como that is best known for its Villa d’Este luxury hotel. The gal is welcomed with a glass of the hotel’s own Asti, Cantine Romagroli 2010 Spumante. It is blazing sun on the gravel terrace overlooking the blue water – originally, the building had been right on the lake, and the terrace is reclaimed. Oh what a history this place has. 1442, convent. 1568 the Cardinal of Como, Tolomeo Gallio, built a villa, taken over by a Milanese playboy, the Marquis Caldara. When he died his ballerina widow Vittoria Peluso married one of Napoleon’s young generals, Count Domenico Pino (to stop him missing fighting she built mock fortresses in the mountain behind the hotel). 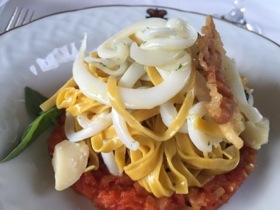 And so on. George III‘s estranged wife Caroline of Brunswick bought it, renamed it after Guelfo d’Este, it passed on, to Baron Ippolito Ciani and Empress Maria Fedowna lived here 1868-1870. In 1948 Countess Pia Bellentani shot her lover Carlo Sacchi dead, during a fashion dinner… today’s life is much more peaceful, although every year the hotel has even higher security than usual when the Ambrosetti Forum, a grown-up version of Davos named for its 1965 founder, Alfred Ambrosetti, is held here. Lucky Ambrosetti delegates. Bet they revel in such culinary delights as the pasta I had, namely Fettucine di calamari e farine bio all’Amatriciana con pecorino di fossa, also known as organic flour and squid fettucine in Amatriciana (bacon, tomatoes and herbs which is named for the tiny town of Amatrice in Italy) with pecorino. 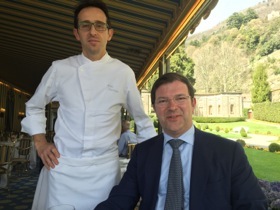 Danilo Zucchetti, who runs this 166-room hotel as well as Villa La Massa, just outside Florence, and two other smaller hotels in the Villa d’Este collection, comes from a family with a long history of hospitality, which includes food. Of course chef Michele Zambanini comes out to say hello as we lunch in Veranda, a gorgeous pull-back-roof extension with pots of blue hydrangeas around all four walls. I ask our server what he had for lunch today. ‘Bolito misto, they look after us very well,’ he says. Danilo Zucchetti says guests, of whom more and more are Australian, come first to stay because of Villa d’Este’s reputation, but repeat visits are because of the staff. 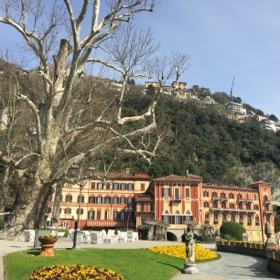 Oh the internationalism of travel today. Australia has soared as a tourism market for Italy since Emirates shacked up with Qantas. Fly, therefore, from major Australian cities to Dubai, and direct on to Milan, and then a 40-minute drive from the airport here to this unique luxury hotel. Sydneysiders typically stay several days, walking a few minutes into Cernobbio ‘centre’ (if you can call it that) and taking boat trips out on the lake. For many it must remind them of daily ferry commutes into Circular Quay, only here on Lake Como it is quiet and the only noise is made by the church bells.