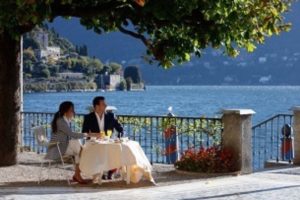 Dine looking out over Lake Como

The beautiful Villa d’Este re-opens for its Summer season March 16th, 2017. There was a convent on this gorgeous spot, on the banks of Lake Como, back in the 15th century and during the years other inhabitants have included the Cardinal of Como, Tolomeo Gallio, who in 1568 asked architect Pellegrino Pellegrini to design the main building, seen above. Later came ballerina Pelusina (Vittoria Peluso) who, after her Milanese husband died, married a young Napoleonic General and built mountainside fortresses and towers, still in the gardens, to stop him feeling homesick for war. Later George III’s estranged wife Caroline of Brunswick called the villa home: in 1868 Empress Maria Fedowna arrived two years, and in 1948 Countess Pia Bellentani, at a 200-person society dinner here, shot her lover Carlo Sacchi stone dead. Today the 166-room luxury hotel is a centre of tranquility. Many merely laze by the water, or go boating, and everyone enjoys the Verandah’s superb food. Danilo Zucchetti is in charge of Villa d’Este.