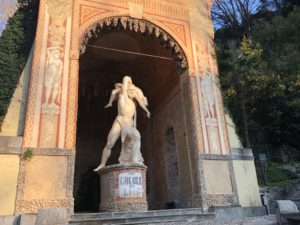 Villa d’Este was never meant to be. Nuns lived on this site, just outside Cernobbio on the lower south-west shores of Lake Como, and in 1568 the local Cardinal, Tolomeo Gallio, asked Pellegrino Pellegrini to build a villa here, to be called Garrovo, after the river. Later, after various exciting episodes it passed to mad-king George III of England’s estranged wife, Caroline of Brunswick, who changed its name to match its location, Guelfo d’Este. The villa continued to be associated with big names: the Empress of Russia, Maria Fedorovna, lived here 1868-1870. In 1948 Countess Pia Bellentani shot her lover dead here, in front of 200 others at a fashion gala).  How much intrigue the many statues have silently witnessed at this supreme luxury hotel. 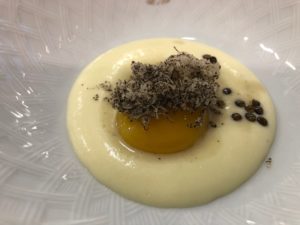 It continues to attract a big following every night of its season – it closes November through February.  Over 30% of guests are repeats, and average stay is four nights.  There are buy-outs, for private or company events, or for such annual occasions as the Ambrosetti Forum think tank, and November’s wine symposium, and the end of every May is the Concours d’Elegance. This year, its 90th annual parade on May 25-26, will see 54 classic cars being adjudicated for looks and performance, and character that is this year attuned to the 2019 theme, ‘The Symphony of Engines’ (chairman of this year’s panel of judges is Pininfarina’s chef designer, Lorenzo Ramacciotti).   Even at normal times, however, dining here retains much of the style of times past. Outside the main entrance to Veranda restaurant, for instance, rests this tray of neckties 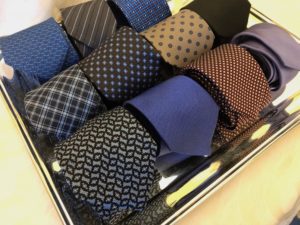 I was dining with the hotel’s MD, Danilo Zucchetti – photo above – in the chef’s kitchen. I must say that Michele Zambanini, who heads the team of 47 culinarians here, is honestly one of the funniest chefs in the business.  He knows exactly when to joke and when to be serious. We started with what looked like fried eggs, in reality lightly poached yolks atop mashed potatoes, and truffles grated on top.  All this was, by the way, done in front of us.  We had burrata with Sicilian prawn atop, and green pea purée surrounding a single scallop.  Next came a real treat, ‘sea wagyu’, chunks of Glacier 51 toothfish, from Heard Island, 4,109 km from Perth, Australia. The final savoury course was veal two ways, and for this our versatile chef entertainers got out their blow torches. 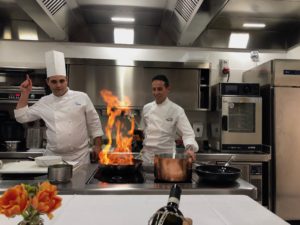 See the photo, and a video below.   I learned so much that evening. Glacier 51, for instance, is named because it was discovered by an Anare party in 1951. This toothfish is caught in waves that are at least five metres high… This luxury hotel is always coming up with something new. Any day now, for instance, the first photos will be unveiled of Villa d’Este’s latest redo. The four bedrooms of the 650 sq m Villa Cima, right on the edge of Lake Como, have been redone in their soft-tweedy style by Loro Piana, one of the Louis Vuitton brands.  Will M. Arnault and his disciples be using the suites for official entertaining (rumour has it that they are contracted so to do)? I also learned to ration my exercise time.  I really wanted to climb not only past the 126 pairs of gently cascading water falls to the statue of Hercules and Lichas but to go further, up the cliff-set walkways. But, sadly, no time.  NEXT visit… MEANWHILE HERE WE HAVE IN ORDER, INSIDE ROOM 137, LOOKING OUT OF ROOM 137, THE CHEFS’ KITCHEN TABLE, AND HOW TO MAKE ZABAGLIONE