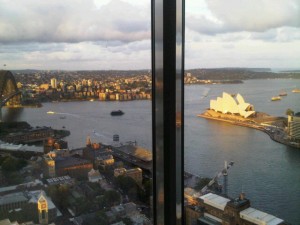 Amazing view down from Altitude, from the bridge, to left, round to the Opera House

The best view of Sydney’s harbour and Opera House is from Altitude, the restaurant on the top floor of the luxury 36-floor Shangri-La Hotel.

Now since the Shang itself is atop-o-The-Rocks, on Cumberland Street, we are talking about quite an elevation.  Look down from Altitude as the sun sets and a warm glow comes over the entire area, and the gal feels it too.

Views make such a difference (why don’t all hotel developers and planners realise this?).  BBGM, who have designed Altitude, have put an angled mirror along the whole inside wall of the restaurant so every table has a harbour view, direct or reflected.

The only decoration in the otherwise-white room is an octopus-shaped chandelier, from the Czech Republic, and, on one interior wall, a photo of a boy, affectionately called Kevin, on a swing. 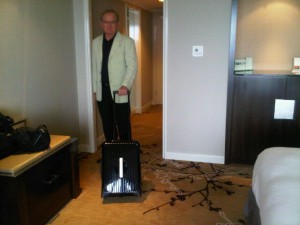 Franz Danhauser, no less, wheels the suitcase into room 2811

It seemed every Happy Local Couple and lots from Asia, especially China and Korea, were checking in that afternoon. George Clooney was reputed to have been booked in here a couple of weeks back, but he ill-advisedly diverted to some casino hotel. Perhaps all these happy couples were coming to see GC – or Kevin.

Fortunately the lovely General Manager, Franz Donhauser (Austrian, but he has Australian residency) happened to come by, despite it being a Saturday, and he insisted on taking the Porsche Rimowa personally up to room 2811.

He wanted, justifiably, to show off the new look. The designer, Grace Gao, immediately gained a new fan.  The room WORKS.  You can easily see the simple round-button light switches, which are labelled: sockets are multi-plug, so will take everything, including UK and US as well as the nearly-unique Y-shaped Ausssie ones. 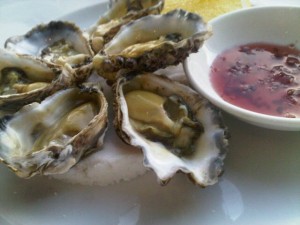 There is masses of hanging space for the many frocks the kind of female who stays here apparently needs, and by the windows are big leather window seats for lounging, and looking out at the view.

It was fortunate, too, that we had a reservation for dinner up in Altitude as it was packed.  The table next to us was four young Chinese women in the designer dresses that would have hung beautifully in those hanging spaces.

We started with rock oysters from Womboyen Lake, a fully-tidal estuarine lake at the south of the Sapphire Coast south of Sydney.  After that came a pressed heirloom tomato, a long flat block surrounded by beetroot, with a goat cheese mousse and bits of crispy ciabatta bread. 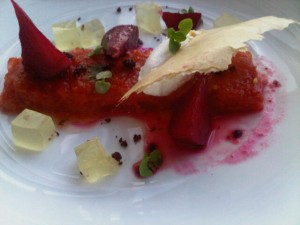 Aha, time for erudition, gal.  Purely for the sake of increasing general knowledge, it seems much of the duck activity in Thirlmere (in Victoria) came from Estonia.

By 1925 there were 25 Estonian families in the area involved in duck farming – today, the main producer is John Meredith at Thirlmere Poultry and he owns the trademark for Meredith ducks, a cross-breed that is allowed to grow twice as long (nine weeks) as most ducks. 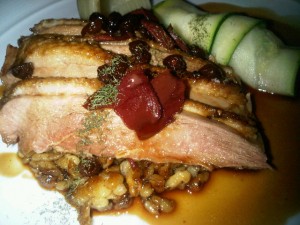 Here the Chinese-Scandinavian chef, Bo Sorenson, pairs his duck with a jus made of dried Pedro Ximénez grapes, which originated in the Canaries. 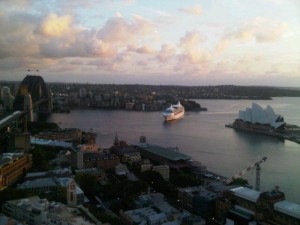 In the morning, an incoming cruise ship dwarfs the Opera House

Another day dawns. Without any yawns and full of energy, the gal leaps out of bed and looks out of the window.

A ghastly monstrosity of the seas (this one Rhapsody of the Seas) is gently nosing into the central Sydney Harbour berth: the ship dwarfs the Opera House.

After a quick run-through The Rocks area, it is breakfast in the 30th floor Club Lounge.  Jerry brings a ‘special orange juice’. It tastes a bit strange. Aha, he says, it is champagne-for-Sunday, with a big smile. Thank you Jerry – and Kevin.