Right to the east of Vienna‘s famous Am Hof square is the city’s newest luxury hotel, Park Hyatt Vienna. As this people-free photo shows, it is a splendid building, put up in 1913 as headquarters for Niederôsterreichische (Lower Austria) Escompte Gesellschaft. It is thanks to an under-40 entrepreneur, René Banko, that it has metamorphosed into a fabulous hotel, surrounded by many neighbouring Goldenes Quartier buildings, also undergoing the Banko botox. Because of its imposing exterior, says the gal, Park Hyatt Vienna, which opened June 1st 2014, already looks a vital part of the city. 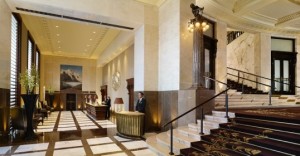 Go into the outer lobby and actually it looks as you would like a bank to look, but of course banks nowadays do not look anything as stylish as this. The designers who have transformed the building are two guys, working as FG Stijl and based in Amsterdam, and for public areas they have made the hotel into one big swirl, a kind of updated Vienna waltz. I actually wanted to dance around, both the marbled main lobby and up eight carpeted steps to the mezzanine lobby. Dance further up and you get to the gloriously panelled meeting rooms that shows how opulent were the surroundings of those bankers of Austria a century ago – one meeting room even has a bust of a suitable financial potentate.

The Grand Salon ballroom is one of two features here that really make me say wow. Look at the room, its tall ceiling inset with gold and coloured patterned panels, more geometric than freeform cartouche. At the very far end, visible in the photo, is a giant and genuine Gobelin tapestry, that acts as backcloth for business meetings, of which there are many, and high-society weddings and special events. This New Year’s Eve, the first for the hotel, it has been taken for a private party, oh wow. I just love this room. 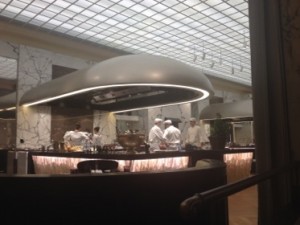 The Bank restaurant has an open kitchen

This glorious luxury hotel also has one of the most memorable airy restaurants in Europe, simply called The Bank. It is a conversion of the original cashiers’ hall, and the infrastructure has been retained. Tall marble columns go to the high-high ceiling, with its clear-storey windows original stained glass – as Palladio said, a big space requires a high ceiling. What has been added is a show kitchen, to one side, and it blends perfectly. There is a chef’s table near to it, but that night, most diners were seated three steps down, in the central part of the entirety. And, you will undoubtedly ask, what about the food? Well, since I was with the triathlete and super-fit GM Monique Dekker, you can bet your bottom dollar, or euro, that it would be ‘my kinda food’…