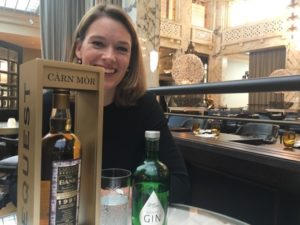 This is a simple story, the transformation of a little-used public space into a serious profit centre, which not surprisingly is an anecdote that everyone involved with luxury hotels, whether owners or operators, really appreciates. Park Hyatt Vienna, in the city’s central Am Hof square, is the conversion of a bank building that opened as a hotel June 1st, 2014. Being Park Hyatt and having the gracious Monique Dekker – left – as GM meant the 143-room hotel was a success from the start, but the owners, SIGNA Holding, based in Innsbruck, knew, says the gal, that they could do more. 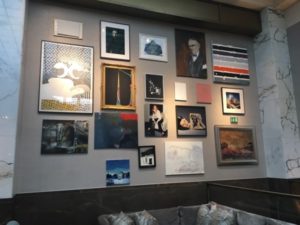 The hotel’s bar was on a lower level, leading off Bognergasse side street. Upstairs from the main Am Hof entrance, the hotel’s main Bank restaurant had a side room intended for special events, but it was seldom used. The answer was to open this area up as a more-public bar, and that is what happened. Now, thanks to designer F.G. Stijl, from Amsterdam – who did the hotel, originally – it is a gorgeous space, its curved bar counter with a top that deliberately looks like crystal candy, flanked by 14 blue leather-backed fixed stools. Behind this counter is a colourful stained glass wall holding shelves of bottles. Some of those bottles are unique. 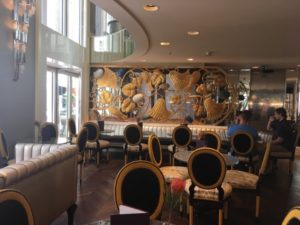 The newly-formed Café Am Hof

The hotel has its own Bank Gin, produced and labelled by Destillerie Harald Keckeis in Rankweil, Austria. It also has its own-label whisky, thanks to a partnership with Carn Mor, which buys an entire cask from Morrison & Mackay’s Auchtentoshan Distillery in Perthshire and then bottles for its clients. These offerings are complemented, says Monique Dekker, by the ambience of the bar itself. F.G. Stijl has invented a lovely local girl, Marlies, supposedly daughter of the bank manager in days past. Marlies travelled the world, and then came back to Vienna, and art on the bar’s walls represents people and episodes in her fictional life – we see likenesses of her father and mother, for instance. And what about that space where the bar was, formerly? Well, that Bognergasse-set room is now Café Am Hof, with a jugendstil wall decoration, and, ideal for summer, an outside area that attracts passers-by who have no idea they are sitting having coffee and a typical Viennese pastry provided by a luxury hotel. This is a case of win-win, and a case study that many other establishments could well copy.