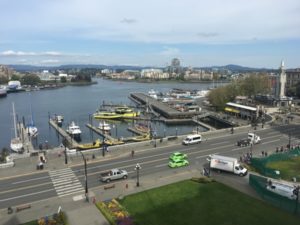 The world’s oldest woman, recently elevated to the clouds above, claimed that three eggs for breakfast every day helped to keep her eternally young. One of North America’s top luxury hotels, Fairmont Empress, Victoria BC, is 1908-vintage and she will be formally unveiled, June 28th, 2017, brought back to pristine condition, a process assisted by pulling away the ivy that was slowly throttling the eight-floor building (the bricks have all been re-pointed). For those lucky enough to be staying in the superb new rooms – see the video, below – the views out, over Victoria’s James Cook statue and the Inner Harbour, are as serenely beautiful as ever. 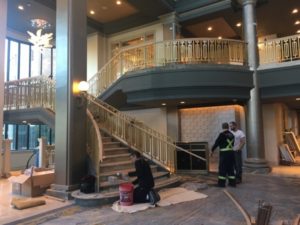 Finishing touches in the lobby

The 464-room hotel was bought in 2014 by Vancouver-based philanthropic entrepreneurs Nat and Flora Bosa, who have poured not only money but endless passion into the new look. Without closing at all, first half and then the other half of the bedrooms have been energized with a pale grey and lavender colour scheme, by HBA. The club lounge is now brilliantly relocated, to the upper first floor, with a big outdoor balcony with day-long firepit, and a book display of really polysyllabic tomes, apparently chosen by the club team. When I was there, last week, work was still going on in the main lobby, which was unveiled this very week, Tuesday May 16th, 2017. 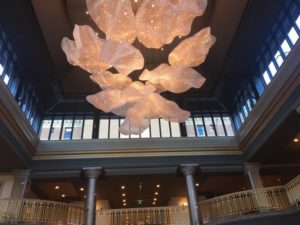 Look up at Lasvit crystal

The Victoria area has about 300,000 residents, most of whom will flock here as soon as they can to see how the new-look lobby appears. There is a giant glass-canopy porte cochère outside. Inside the two-floor space, the eye goes up immediately to an enormous ceiling-hung Lasvit crystal sculpture, from the Czech Republic, and one smaller one, to one side: both show a series of flower petals, as is a smaller one to one side. This whole new look is simply stunning – as is the re-vamped dining and drinking. Here, The Puccini Group has reconceptualized, at least the look. The all-day Q, for Queen Victoria (lifesize, full-length portraits of her, wearing soft lavender, hang along one wall): next to it is Q Bar, a bright venue with big windows over the gardens, and, dining there with local friends, I had to try the local halibut, with sides of mushrooms and spinach. 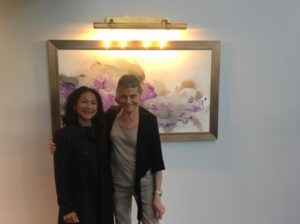 The best breakfast in this luxury hotel is in the gorgeous club lounge, which has a buffet showcasing artisanal breads, fruits and healthy fare and, if the weather permits, you can sit out on that lovely terrace – Q’s breakfast is à la carte, only. Afterwards Indu Brar, the brilliant GM who is supervising the renovation as well as managing 400 employees, hotel guests and interested locals, and, somehow spending at least 30 hours a week finishing her EMBA, described other special pointers here at ‘The Empress’. The Olympic-sized indoor pool has new wall murals, and at the spa there are local Sea Flora products (try a pedicure from Jill, she is really good). And the hotel’s own boutique sells ranges of local honey, plus several designs of divine floral afternoon tea china, including the 22-carat hand-painted pattern that was gifted to the hotel by King George VI and Queen Elizabeth after their visit in 1939. I am sure The Queen Mother, as she later became, would have approved not only of the hotel’s ongoing must-reserve afternoon tea meals, but also the newly-introduced Gin-and-Cake offering, namely a bespoke local gin and slices of a Sacher-like torte topped with an edible crown. NOW SEE A VIDEO OF ROOM AND VIEW, BELOW