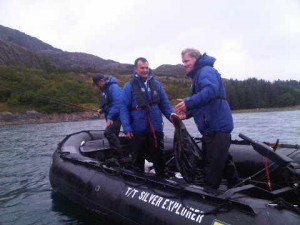 Christian Armster is one helluvah guy. A third of his time is spent playing in a six-piece heavy metal band around the Munich area.  He plays the guitar, sings, and cooks onstage, all part of the kitchen-comedy rock band Zielgruppenverfehlung.

The rest of his time, like four months straight before another two months back in Germany, he is executive chef of the luxury expedition ship Silver Explorer.  When he is playing band, his place on the ship is taken by a South African woman. 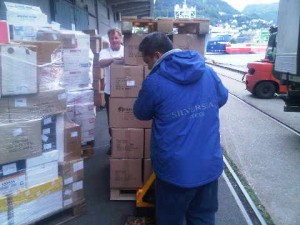 Here, onboard, he is currently feeding 106 passengers and 121 crew. The latter, he confesses, are the bigger challenge as he has so many nationalities, from Russian to Peruvian with the majority being Filipino.

There is a dedicated crew chef but all his cooks take it in turn to cook there.  Everyone needs their own national dishes, but in the main, says the boss-chef, they go for what he calls ‘kids’ pantry’, chicken rings and the like (he himself often snacks on roast potatoes, onions and smoked bacon topped with scrambled eggs but when he gets back home to Munich, he grills bratwurst on his barbecue, whatever the weather, and complements it with Bavarian beer – of course). 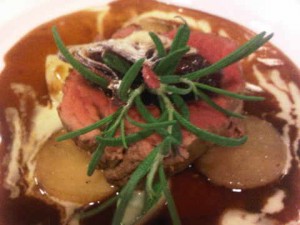 Christian Armster has 18 in his main kitchen here, including a German master baker, who produces fabulous and healthy breads, even sourdough, delicious with German butter, served unsalted but salted is available (every table is set, too, with separate bottles of Italian olive oil and balsamico, and salts and peppers in Peugeot mills).

Everything is produced from scratch, though obviously he has to work with some frozen basics.  Beef comes from Argentina, Scotland and the USA – the ribeye is Kansas Prime, nothing beats it, he says.

When he has lots of Americans onboard, he knows that up to 80 percent of passengers will opt for beef.  This particular voyage, a Nordic special, sees half-half takeup, fish or meat. 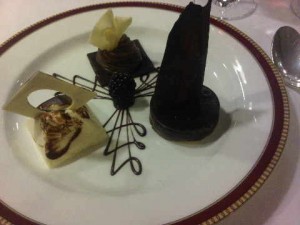 …and a chocolate dessert

Unlike his counterparts in top luxury hotels in, say, Bangkok or Paris, he works to a framework of menus prepared by Silversea’s corporate office, working in partnership with chefs who are part of the Relais & Chateaux consortium.

Into this, Christian Armster inserts what he has found locally.  In Alesund the other day he picked up a lot of fresh cod and salmon.  Lovely.  These appeared on his menu.

Immediately before this cruise started, in Tromsø, the ship sailed in Russian waters – it was the one of the first expedition ships to go to Franz Josef Land – and towards the end of that sailing there was a considerable challenge in being creative in menu-planning.

In Bergen yesterday, major supplies were loaded.  These included fresh berries, as we saw in the city’s open-air market, and cases of everything from Korean china through to months’ supplies of sugar and so on.

Orders had been put through at least three months ahead, and facilitated by a German agent.  Thank goodness for internet, says the chef.  If there is an emergency he can generally get something pretty quickly.  He keeps salad stuff fresh by buying on the root, lettuce included. 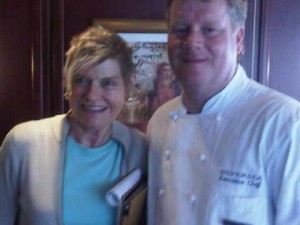 He has, it seems, an unlimited supply of fresh artichoke hearts on this voyage.  They appear as appetizers on the dinner menu, and, at the lunch buffets, as vegetables, salads and in ravioli.

Breakfast is buffet, by the way, with main courses brought a la carte if requested.  Lunch is also buffet, though you can order anything, say superb hamburgers with plenty of fries and irresistible onion rings.

As well as the set dinner menus (one normally eats three courses, perhaps with added fresh sorbet, desserts and final petits fours), you can order practically anything.

Kosher is no problem, says the chef – he has a small kosher corner, with dedicated pots and pans.  He sees more and more gluten-free and other special requests.  Neither passengers nor crew typically put on weight during a voyage as few use the elevators aboard the seven-deck ship.

Expeditions are also calorie-consuming: after a major onshore trek, a group of 120 passengers can easily order at least 150 main courses… 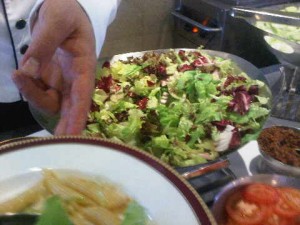 All his salads are loaded still on the root, to ensure maximum freshness

This is a guy with so much passion.  From the moment he started an apprenticeship at a family restaurant in Munich he knew he loved to cook (his boss told him that if he cut his hair and did something about his then-hippie clothes, he had a great future ahead of him).

He just loves his life, he says.  If any of those celebrity chefs, including a certain Mr Ramsay, came onboard he might well hit him with a heavy pan as celebrity is not part of the Armster Attitude.  Yes, this Silver Explorer chef is one helluvah guy.