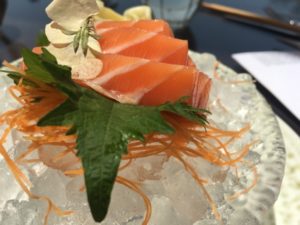 There is always a smile when a luxury hotel finds ways of upgrading its offerings yet again. Up and up forever is the marching song, and it certainly works, says the gal, at Four Seasons Resort Dubai at Jumeirah Beach. When the hotel opened on December 1st 2014 it already had the stunning Mercury rooftop bar, indoor or out and oh so many trendy locals flocked there, and ladies loved martinis-and-manicures on Mondays. Now there seems to be more emphasis on all age groups. Recently-arrived Italian GM Leonardo Baiocchi, for instance, has replaced a knick-knack shop on the lower ground floor by an absolutely stunning boutique for little ones – look at the boss, above, showing off one of the creations. 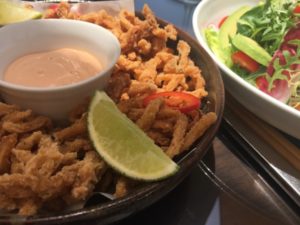 And he is building up food awareness, both inside the hotel and out. If local magnates moor their designer yachts near the property, a waiter zooms out on a jetski to take any ‘room service’ orders. If they are sensible those privileged sailors would choose exactly what I had that hot weekend lunch, outside on the beach-set terrace. I started with salmon sashimi, wen on to crispy calamari. Of course we started talking about food, and I heard about the restaurant village in the carpark in front of the hotel, and after our espressos we went to have a look. There are about seven restaurants there, with more to come, and all are ultimately owned by the Sahenk family, who own Dogus.  The family is also into a myriad of other interests.  They are, for instance, now part-owers of Hilton Athens. 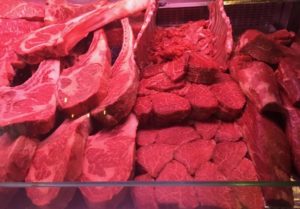 At the carpark-set restaurant village it was actually the Turkish beef emporium that fascinated me the most. Called Nusr-ET, after the theatrical butcher-chef Nusret Gökce, it is a modern taken on Vlado’s in Melbourne. There, Vlado, metaphorically larger than the tiny shop he owned, would similarly cut one piece of meat after another, give you a single bite of cooked neck, and then some cubes of wagyu and so on. As the photo shows, it is pretty much the same here only the sizes of the cuts are, well, enormous. Nusret Gökce is also known as Salt Baa and his almost-slapstick method of cutting and swirling meat has become an internet sensation. 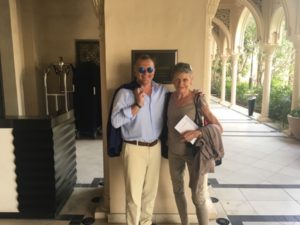 This January 7th, indeed, one video, Ottoman Steak, was viewed 10 million times on Instagram and Nusret Gökce was interviewed by NBC News. ‘The shape of the meat and the taste of it starting from the top down is a part of me. All of my feelings are coming from inside of the meat down to putting salt on to it.’ Did anyone say that Four Seasons is not keeping up with the times? Thinking of Le Sirenuse at Four Seasons at the Surf Club, FL, a couple of weeks ago and now this raw meat theatre here in Dubai, I make a wry smile.