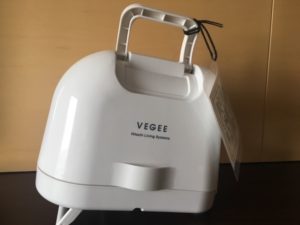 Is this from outer space, or a humble iron?

The gal loves nothing better than seeing a venerable hotel that has kept itself marvellously up to date. The 821-room Hilton Tokyo opened in 1984, and it remains the only luxury hotel that the gal has stayed in that has shoji screens instead of window blinds or curtains. Yes, you know you are in Japan – see the video below. You also know where you are when confronted by some of the technology. Have YOU seen an iron like this, on the left? When it opened, this hotel offered the luxury of a big assortment of restaurants that would now seem really old fashioned. Two years ago Hilton re-imagined its entire second floor to make a journey of eating. 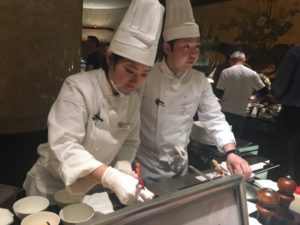 Restaurants flow, from Chinese to teppanyaki, from sushi to steakhouse and so on. We opted for Madison Grill, to see how the kitchen here can rival, says, Smith & Wollensky back in the States, or Wolfgang Puck’s CUT, as in London and Singapore. The answer, I say, is that my 200-gram Hokkaido wagyu A3 sirloin was one of the juiciest, most flavourful ever – I loved the way it was served on a slate, with two small mounds of salt, and a tray offered a wide choice of mustards and dressings. I also liked the simple A3-sized paper menu held on a wood clipboard.   All local diners, says the hotel’s business development guru Brad Crump, a Perth guy who has lived in Japan since he was 17, would go for a set menu, three courses but priced depending on the beef cut: in this Aussie’s honour, we drank Leconfield Coonawarra 2014 Cabernet Sauvignon. 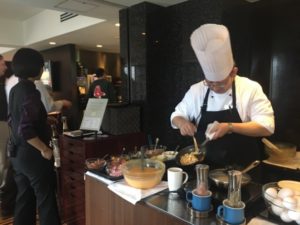 Brad Crump says that as well as the company’s Hilton HHonors loyalty programme, the hotel’s own Diamond Club is indispensible for communicating to its many Tokyo admirers. The off-lobby Marble Lounge is currently offering a sakura, cherry blossom-themed, afternoon tea buffet – see the photo above. They started selling this on January 1st and by the end of that week the 260-seat event was completely sold out THROUGH MAY! The cost is ¥4,637-¥4,783 a head (weekends at the higher price), no time limit. I later checked with The Ritz, London, where its 90-minute tea, from £54 each, only gets fully booked, up to 12 weeks ahead, at weekends and holidays, for the 3.30 and 5.30 seatings). 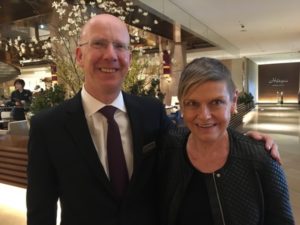 As I often do, I had two breakfasts at this friendly, practical and thoroughly agreeable luxury hotel. Up in the 37th floor Club Lounge there was relative calm, but in the ground floor Marble Lounge the buffet was full-house but brilliantly supervised. At least 200 runners, recovering from yesterday’s 36,000-strong Tokyo Marathon, were networking with new friends from all over the globe and refuelling, making up for all the calories they used in the run. The breakfast team worked like a One Nation event special, covering for each other so that when one of the two egg chefs – see their hygienic chin guards – needed to get more supplies, someone else instantly stepped in to complete the omelette. GM Mike Williamson admitted that all this activity is a far cry from his childhood, when he was brought up partly in a 35-room hotel his parents owned in northern England. NOW SEE, BELOW, A VIDEO OF MY ROOM