It was time for an update on Vancouver, and the best place was its iconic hotel, Fairmont Hotel Vancouver. What a trophy it must have been when the four-floor building, with 60 bedrooms, was finished in 1887 (that building was replaced in 1912, and it in turn was to be demolished to give way to today’s towering 17-floor ‘castle in the city’, officially opened by King George VI and Queen Elizabeth in 1939). This is a classic hotel with the best of today, too – above, see the Dali ‘Dancer’ statue by the lobby’s Dior boutique.

Yes, this is a place with history, and fortunately a sense of legacy remains. I felt the wood doors of the elevators, for instance, could have been used by Their Majesties.  Best of today’s 556 bedrooms are those on the 14th, Royal, floor, or anything that has access to the ninth floor Fairmont Gold club lounge.  I was in 1405, a pale grey and mushroom space with lovely full length drapes that blended various shades of shiny mole: I liked the simple chandelier, with six straight-sided white shades, and the fibre optic lights cleverly set into the head of the remarkably comfy bed. I had sockets and USB ports at, it seemed, every turn.  Pride of the whole, however, was the bathroom. Magnificently, and flatteringly, lit, it was all grey-flecked marble. As well as a freestanding egg-shaped corian tub, with instant hot water. The glass walled-shower area had showers, and space, for at least two sumo wrestlers. And oh, for simplicity, the Nespresso machine was easy-to-use, and generously had two each of four different capsules, and Fairmont Store’s own teas offered Imperial Breakfast and Oregon Mint organic tisane. 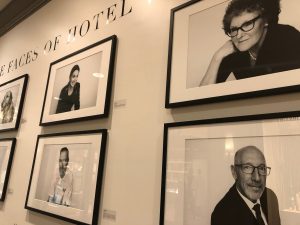 After an excellent breakfast, with, for a change, smoked salmon and hard-boiled eggs, I wanted to see the hotel’s main floor art exhibit.  As part of Fairmont Hotel Vancouver’s 80th birthday, local photographer Dennis Grocer of The Collective You was asked to shoot some of the hotel’s team.  As well as black-and-whites of both canine ambassadors, labradors Ella and Elly, there are also such subjects as Darren, a 29-year veteran now in the Fairmont Gold team.  His caption says ‘the feeling of support, fun and love from colleagues and guests make my job an absolute joy to come to every day’. See the image, right. 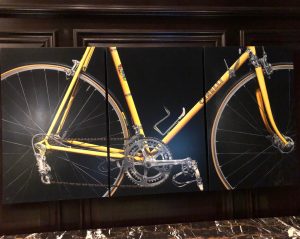 Vancouver is a growing cultural hub.  This very night I could listen to Vancouver Symphony Orchestra doing Carmen, with Canadian-Tunisian star Rihab Chaieb. Dana Michel is the star at The Dance Centre, there is a naughty but nice sex show at the Convention Centre, and, at Rogers Arena, Vancouver Canucks Hockey plays the Calgary Flames. During the day, there is also great shopping, and outdoor sightseeing (I love cycling round Stanley Park, and on this visit we had brunch at The Teahouse in Stanley Park, right at Ferguson Point – their ling-cod fish and ships have a light-crisp batter that is superb).

For dinner, there is nothing more stylish than Hawksworth at Rosewood Hotel Georgia. Before going into the restaurant, however, I had to re-visit favourite art pieces in the hotel’s lobby.  Behind the conciergerie is a Nickalas Blades oil of a lifesize bicycle, the actual yellow Cinelli that Greg LeMond rode in the 1976-1977 season.  Beyond are some unique 3-d perspectives by Patrick Hughes.  Then it was time for Hawksworth.

When Rosewood Hotel Georgia  re-opened 2011 after a massive conversion from its prior Crowne Plaza life, the hotel began a partnership with local celebrity restaurateur David Hawksworth. He leases the hotel’s entire ground floor facing West Georgia Street, with a dedicated street-set entrance.  Designer Alessandro Munge, Munge & Leung, created four separate adjoining spaces, one a clubby bar and the others dining areas: all have significant wall art, with a Damien Hirst in the bar and, in one diming room, a 1.5 metre-tall Harland Miller sign, ‘too cool to die’. Staff are all Hawksworth (the hotel oversees lobby, poolside and in-room dining, and catering).

Although Hawksworth is open daily for breakfast on, it was dinner that interested me, this visit. The menu offers a six-course menu, with or without wine pairings.  I went à la carte. I eschewed paying for a copious bread basket and went straight into a yummy barbeque grilled octopus with small dollops of burnt avocado, mescal and mole, and kohlrabi julienne – it smelled good, it looked good and every bite was super-flavour. Next, I went vegetarian, in the form of wild mushroom pappardelle with truffle, parmesan, hazelnuts and chicken jus, plus two sides, salt-roasted beets with beetroot caramel and sumac yoghurt, and Brussels sprouts with pumpkin syrup and pistachio (this sauce-avoider has to admit it was the jus that made this dish especially heavenly). I also had a tasting of Okanagan Valley pinots, namely a 2018 Burrowing Owl Pinot Gris, then a 2017 Pinot Noir Stag’s Hollow from Shuttleworth Creek Vineyard. I did not meet either David Hawksworth or his Mexican on-site chef, Antonio Sotomayor, but I was really impressed by my Slovenian server, Eric, who like all his colleagues seemed to be wearing his own, all-black, clothes. It was also an added treat to spend half an hour with the hotel’s newly-arrived director sales & marketing Paul Li , who says Hawksworth is actually a signature restaurant that has bedrooms – both products appeal to the same discerning market and, having a dress code, the restaurant attracts staycationers coming for a special meal, and why not stay over?  Hotel guests are, crucially, guaranteed dinner reservations, which otherwise could be tricky most nights, even though tables are turned at least once. 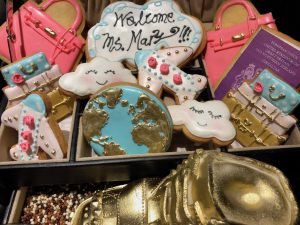 And then I walked back along West Georgia Street to my home for that night, Trump International Hotel & Tower Vancouver, a 69-floor tower that in pre-opening days had pretensions of becoming a Ritz-Carlton. From the West Georgia Street entrance you walk straight into the Champagne lounge which, thanks to walls of mirrored facets, has many private seating areas, obviously beloved by younger-generation Asian-Canadians. Suite 2101 is one of three on that floor that has a sizeable terrace overlooking the city, and the overall internal area is spacious and efficient: the wall-set Crestron digital control pad is the most simple I have encountered. My 5.45 a.m. breakfast was wheeled in on the dot – a whole linen-covered table, with flowers, and iced water, bore one single dish, two still-runny dark-yolk poached eggs, each on a bed of crushed avocado on seven-grain toast. I had already made coffee from my Nespresso machine (cups are blue and white striped Jasper Conran for Wedgwood) and, that stylish breakfast over, I went down to the lower lobby. Sadly, for the first time Uber could not find me a car so Alvin, a superb bellman, instantly hailed a cab and I was on my way back to the airport. WANT TO SEE A NEW-LOOK FAIRMONT HOTEL VANCOUVER SUITE?