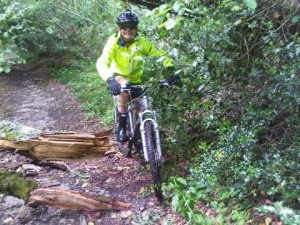 Who is this showing such stamina biking through fallen trees in the wood?

Sometimes a gal needs to show her stamina, cycling through dense woods, Hunter welly boots’n all because of the weather, lots of trees have blown down, and the slope is steep (turn your head through 45 degrees to get the correct angle of the incline.  And no, no indication of where in the world this is, sorry.  Just look at the greenery, and enjoy.

You look into trees, too, when dining at Jing An restaurant in the PuLi, a sensational luxury Leading hotel in Shanghai. The building is right next to Jing’An Park and the designer, Johannes Hartfuss from Melbourne, has brought the park into the restaurant, so to speak. 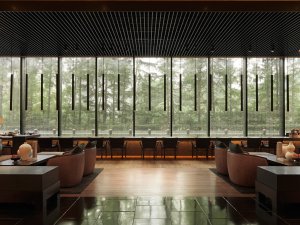 He has given such a feeling of locale to the entire 229-room hotel.  Arrive past a series of anonymous twists and turns, past sculptures and water features (is this really a hotel).

You get to the check-in area, which actually is one end of a 90-foot long bar formed of two teak trunks: the length continues into a proper bar.  Behind you as you check in is a library with a real fire, by which I mean REAL logs. The floor all around you here is formed of black tiles as in the Forbidden City.

Some walls are dark brown woven rattan. Some other walls are tiny grey Shanghai-clay bricks.  Your bedroom has a 12-foot ceiling, and big pull-back silkscreen screens between your bed and bath area, where the washbasins are perched on floor-standing bronze drums. You feel very Asian, very calm. 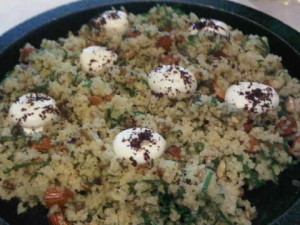 Wheat salad with lebaneh in a stone ‘dog bowl’

You feel calm too when sitting, on a bankette or chair, in the second-floor restaurant.  The table has a basketweave top, the breads come in a heavy wood box. The chef, Michael Wilson – also from Melbourne – comes out to explain his new-look menu.

Everything is a new-take, sometimes on old favourites.  A starter might be a Middle Eastern salad (Melbourne is one of the largest ‘Middle Eastern’ cities in the world, as well as being the third largest Greek city, after Athens and Thessaloniki).

But Michael Wilson makes his Middle Eastern salad look different.  Firstly, he serves it in a circular dog bowl, of stone.  This he fills with cracked wheat topped with teaspoons of lebaneh, and the whole is dotted with almonds and peanuts. 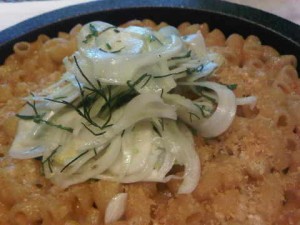 The best mac ‘n cheese in the world, by Michael Wilson

We talk nonstop.  Scot John Laing, one of the founders of Urban Resorts, the company which so brilliantly has thought up and now manages this city hotel that is on a par with one of Jaya Ibrahim’s rural hideaways, describes a surprise birthday party he organized, from afar, for a friend at The Savoy, where they both worked a long time ago in London.

Dutchman Martijn Van Der Valk, who runs this hotel as if it had only ten rooms in a hideaway miles from anywhere, has us in total admiration when describing a rural wedding that started with 1045 baiju, the Chinese white spirit distilled from glutinous rice to give anything from 40 to 60 percent alcohol – and finished after lunch the following day.

I am silent, merely devouring the new-look mac ‘n cheese, in another stone dogbowl, with a topping of fennel, and a green side salad. 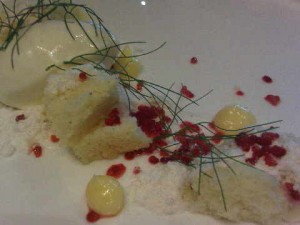 One of Wilson’s three desserts…

Time for dessert, and Michael Wilson brings out three.  There is a peanut butter parfait that looks like an energy bar.  There is a vanilla cake served with lemon curd, white chocolate powder and raspberry bits (take frozen raspberries and break off one bit at a time).

And a strawberry creation, which incorporates sheep’s milk sorbet, a strawberry granite and strawberries in celery sugar. New takes, chef, and lots of fun. Bet his barbies on the terrace on Saturdays are different, with lots of Beautiful People around. Many fashionistas stay here, because Chanel and other big brands have their local headquarters in this area. 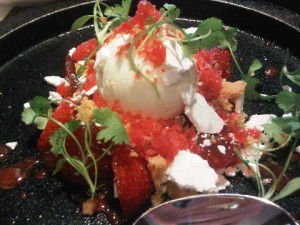 Everyone has fun here. The PuLi (note the capital L) has a sensational indoor infinity pool with soaring stone walls on three sides, and a view to Jing’An Park on the fourth, and the spa is run by Anantara.

John Laing is one of life’s great raconteurs and he shares stories, and plans. The next Urban Resort, masterminded by him and his co-founder, Markus Engel, opens in Wuhan this very December.

This one will be called the  PuYu Hotel and Spa, and it will be run by the oh-so-English Nigel Badminton, who looked after me when I was at Amarvilas visiting the Taj Mahal.  It too will be designed by Johannes Hartfuss and like the PuLi, the sense of arrival will instantly invoke calm. 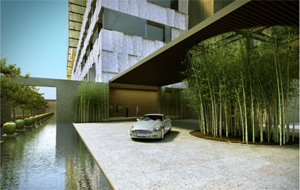 This will be the arrival at Urban Resorts’ second property, the PuYu in Wuhan

Just as many of China’s millionaires appreciate the feng shui of the PuLi, they will find the same here (Rupert Hoogewerf, Chairman of the definitive Hurun Report, says travel is the most-preferred leisure activity of his clients, followed by reading and tea-tasting – one tycoon recently bought a whole mountain to grow his own brew).