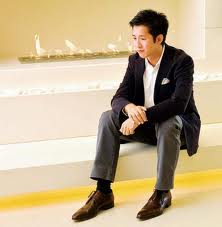 Andre Fu is one of those rare enigmas who is incredibly intelligent, incredibly talented, and you want to know more. Born in Hong Kong, graduated from Cambridge, designer of the forthcoming Shangri-La Hotel in London’s tallest tower, The Shard, a shape by architect Renzo Piano…

Fu works with such retailers as Agnès b and Lane Crawford, and he has done actress Michelle Yeoh’s home on The Peak on Hong Kong Island. He first really made his name, says the gal, with the interiors for The Upper House in Hong Kong.  And he still looks like a teenager..

The Upper House, on floor three above all the magnet stores in the marvellous Pacific Place retail mall,  is a brilliant concept inside and out. 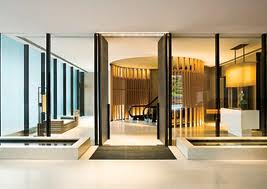 Entrance to The Upper House

The 117 bedrooms are cleverly set in the adjacent J.W.Marriott, in a way that would be impossible if both properties were not owned by the same entity, in this case Swire.

Outside, all you see of The Upper House is an enormous stone box, an intriguing entrance of Bedonia stone façade designed by Thomas Heatherwick, who did the UK pavilion at the 2010 Shanghai World Expo. Tucked away inside this ‘box’ is a 13-ft textured nickel door set in all-wall windows.  From now on, all is Andre Fu. 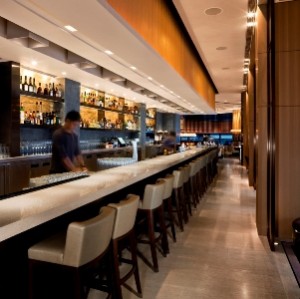 And it is wood, lots of wood, pale Asian species and ash and bamboo, and shoji glass. You take an escalator, as if through a diagonal tunnel of wood shapes, up to a welcome area with a garden (The Lawn) outside.   Take an elevator up to the 49th entertainment floor.

Here there is yet more of this pale wood. You intriguingly walk over a 20-foot Sky Bridge looking down into a 120ft-high open atrium.

Above, as you walk-the-bridge, a cathedral ceiling is seemingly lined with a giant ‘clock’ shape of radial wood planks, 106 of them in all.   At the restaurant, Café Gray, your eye turns right, to a 46ft-long bar. 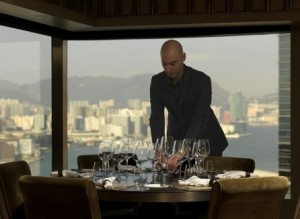 Cafe Gray has sensational 49th floor views, across Victoria Harbour to Kowloon beyond

Look straight ahead and you are in an origami-shaped room deliberately set, it seems, to allow maximum views down to Victoria Harbour and across to the mainland of Kowloon.  Tables, with lots of banquettes, are set with crisp linens and candles, and Laguiole knives, recognisable from the little metal bee at the head of the spine. Now what kind of food would we get?

Look at Tripadvisor and it describes Café Gray’s food as ‘Eastern European’.  Come off it.  Gray Kunz, born in Singapore, is Swiss, not Eastern European.  His onsite chef here, Chris Grare, is a New Jersey boy. 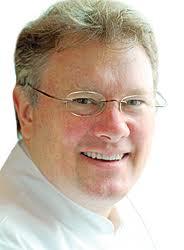 Gray Kunz’ face shows what a thoroughly nice guy he is

I first met Kunz here, at Plume in the then-Regent, now InterContinental Hong Kong, and then he moved to The Peninsula New York.  Now, as mentor of this restaurant atop The Upper House, he comes three or four times a year and stays at least a month at a time.

The menu here is more American than anything else.  You can get a set four-course, and Chris Grare is never happier than when composing a menu specially for you, even though they regularly seat around a hundred a night, few of whom are hotel guests.

Look back at Tripadvisor and you see comments from around the world.

First came bread slices, in a Finnish-style wood box, with a dip that tasted like a runny hommus. 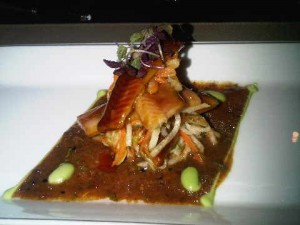 You can start with Teriyaki-smoked eel with edamame wasabi coulis, pickled jicama and ginger-soy vinaigrette.  Have you ever seen THAT in Eastern Europe?   You can then go on to best seller, Limoncello-marinated organic chicken with prunes, sweetcorn and summer vegetables, lemon pappardelle.

That is Italy meets USA.  The dessert that Grare specifically wanted us to try was pure-USA, a Whiskey and molasses cheesecake.  Around were groups of businessmen, young couples, families. 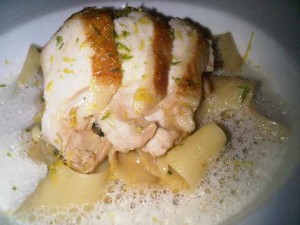 There were also several tables of single diners, some with iPads (lighting is clever in that you can easily read without being floodlit).  I looked in vain for celebrities but there was no-one recognisable.

Hong Kong’s biggest a major events venue, AsiaWorld-Arena, 28 minutes from downtown on the Airport Express, can ‘only’ hold 14,000, which precludes Hong Kong being on the regular circuit of the big name groups.   Lady Gaga did a few days there this May (she stayed at Ritz-Carlton Hong Kong, where the gal met up with André Fu at a fabulous dinner hosted by Ricco DeBlank).

In general, however, when celebs, with a small ‘c’, come to Hong Kong they want to be hosted for free, which means they have to find somewhere else to lay the pretty little head and its curlers. 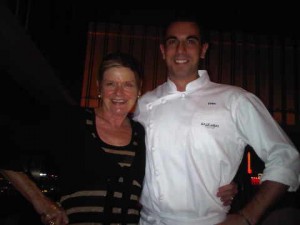 Chris Grare is a rather unusual chef, by the way. He looks ultra fit, which provoked a conversation at our table about how the old adage about ‘never trust a skinny chef’ needs to be changed in today’s world, especially when McDonald’s is a major Olympics sponsors, to ‘never trust a fat chef’.

This particular Product of America comes striding through the full restaurant and stands with his arms akimbo and you think he is ready for a fight.  Well, he was a physical education teacher – yes seriously – before he turned to his first love (next time in Hong Kong, the gal is going cycling with him up to The Peak, perhaps past Michelle Yeoh’s house).