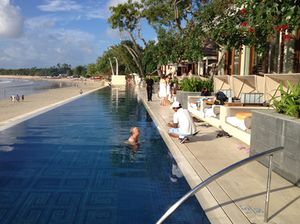 To those who already know one of Asia’s finest luxury resorts, Four Seasons Jimbaran Bay in Bali, you are in for a big surprise.  Look what has appeared on the beach, down in Jimbaran Bay itself… this lap pool was added in February as part of the eight million dollar Sundara (‘beautiful’) development.  As well as the pool, the gal found an outdoor entertainment area flanked by two-floor air-conditioned one end (bar, and upper meeting room) and, the other end, a two-floor restaurant, free-breeze downstairs and air-conditioned upstairs. 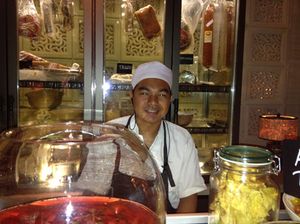 Designed by Spin, and managed by a Dutchman who came from Neil Perry’s Rockpool complex in Sydney, Sundara is one massive destination that some do not realise is part of, and run by, the hotel, which is about a third of a mile away.  Enter the air-conditioned area and you go past a charcuterie station, with all kinds of dried and cured meats – the chef, an Aussie called Greg Bunt, is very proud of the things he has here, in this cabinet.  Start with a mixed charcuterie plate, go on to whatever (best-seller is his seafood platter, apparently). 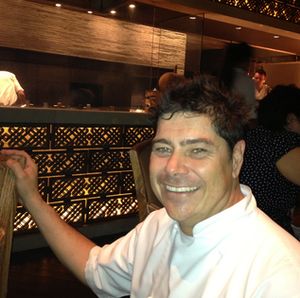 His menu is pages held on a clipboard.  I went for beetroot salad with pomegranate and walnuts and a citrus labeneh, and a US Black Angus grain-fed 200 days rib-on-the-bone (OH the organic baby carrots).  We started the evening with Bloom of Sundara cocktails, vodka, lemon, and passion fruit – one guy, who was driving, went alcohol-free, with a Passionfruit Ipanema, with lime and pineapple juice. The cocktails are all designed by Javier de las Muelas, the Catalan author of Cocktails & Drinks Book, who is best known for his work with El Bulli and at his own bars, led by Dry Martini, which he opened in Barcelona in 1978 (it has a Speakeasy restaurant lab where he trials new ideas). 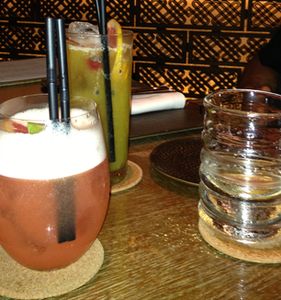 Bloom of Sundara (Ipanema, behind)

Later, I checked out his book, to see which cocktails he pairs with what music. A bellini, for instance, goes best with Pavarotti singing Verdi’s Celeste Aida – wonder how that bellini at CIPs at the Cipriani would have tasted with a Pavarotti recording too?  For a Bloody Mary, he says, nothing is better than a recording of Edith Piaf Live at the Copacabana, way back in 1949.  See the YouTube of this.  We go on from cocktails, to basic wines, eschewing the Ch Margaux 1996 which is listed at a price to attract our friends from Beijing and Moscow.  Honestly, a Spanish Telmo Rodriguez 2010 Mencia tastes as good… 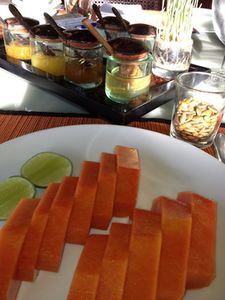 Talking of taste, this lovely 147-room oh-so-private hotel (every room is a villa, enclosed in its own walled garden with, in all 151 pools), this hotel knows that you want what you want at breakfast. There is no buffet, in an open-sided restaurant back up at the hotel, but the batik-covered menus offer continental, Japanese, Korean, American, European (cold cuts) and Indonesian sets.  Locals, therefore, will find their ‘set’ gives them fried rice, spiced fried chicken, fried egg, vegetable pickles, satay and crackers.  Now I know.  I stick with an unlisted plate of simple papaya, and look across my table set with small wood-topped glass pots holding salt and pepper, honey, jams – and living wheatgrass. 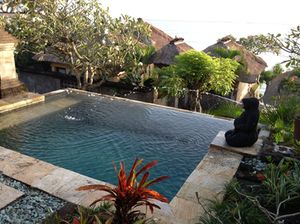 Skinny-dip in your villa pool, any time

And then it is back to villa 220. Outside the main door to the enclosed courtyard-garden, carved posts have ledges holding offerings to gods that are placed by employees, every morning.  Inside, my ‘space’ includes a five-metre pool for skinny dipping, and a sala, and the villa, which is one room and a massive bathroom with inside and outside showers.  It may be 20 years old this year but, you know what, this luxury hotel gives everything that today’s girlahead needs, including complimentary bicycles.