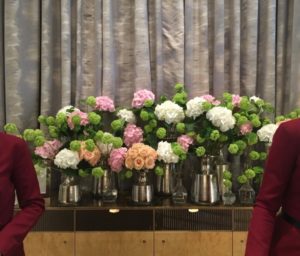 What does the word ‘town’ go with? ‘Town and gown’ if we are talking historic university destinations, say Oxford or Cambridge, for some reason always put in non-alphabetical order. ‘Town and country’ if we are talking an iconic US magazine, or even an outstanding luxury London hotel. Mandarin Oriental London has one facet that is town, directly on Knightsbridge: the other main facet of the H-shaped building is right on the edge of Hyde Park, the only one of London’s top properties to be in a Royal Park. The gal wanted to see the hotel’s new Joyce Wang look. The first part of the transformation, the Town side, is open, and it is SUPER. Arrive, and you are immediately aware that the eight steps up to the entrance have been whitened. 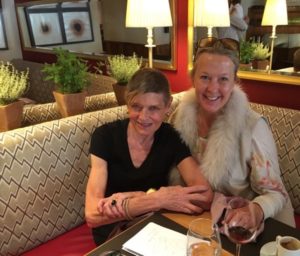 Inside, up a further 13 carpeted stairs, instead of two Concierge desks, one either side, their backs to you as you ascend, now you have one desk set diagonally facing you forward-right. You still have to turn left to Reception, but then you turn immediately right to a high counter manned, sic, by charming ladies in chic deep plum dresses designed, I am told, by the hotel’s brilliant Da Vinci-like entrepreneurial GM, Gérald Sintès (look at the flowers, behind them, in the photo to the above left that looks like a Gilbert & George artwork). Where the old front desk was – stilted, masculine, 20th not 21st century ‘we do not want real daylight do we?’ – there is now a metrosexual comfy sitting area, masses of fresh flowers, and DAYLIGHT. 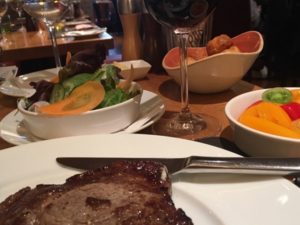 A perfect lunch, away from vegan festivities in Hyde Park

My pal Sarah Cairns was not surprisingly smiling like a Cheshire cat when she showed it to me – this is the person who personifies letting real celebrities (not the trash wannabes) know what is top in London. She is big in all the LA red carpet galas, when she always wears Jenny Packham. She is big in London, where she works on behalf of the hotel with the BAFTAs, Harrods, the Royal Ballet, and a host of other names. Sarah Cairns is supreme when it comes to getting the message through to top international entertainment celebrities that THIS is London (yes, Sally Bulloch wore that garland in the last century, at the Athenaeum, but now we are talking 2017 and beyond). We met up for a Saturday lunch in Bar Boulud, one of Mandarin Oriental London’s two celebrity chef restaurants, both of which are packed out. I love BB for its perfect ambience – as long as there are no toddlers with powerful lungs – and because it is friendly, with an easy-read, easy-choose menu. There was a vegan gathering going on outside, in Hyde Park. That did not, however, affect lunchers (is there such a word?) in this luxury hotel. Both Sarah Cairns and I chose ribeyes, nothing to start, no dessert. Ribeyes, no sauce, side salads with olive oil, heirloom tomatoes, perfect. Yes, I could have had bite-sized gougères and two-bite baguettes in a paper-lined metal cup, but, you know what, I wanted to continue looking healthy. As I left Mandarin Oriental London I realised I felt better than when I arrived, particularly since the 24/7 gym, which I had used before lunch, has Citterio Technogym pieces, with Sudoku.