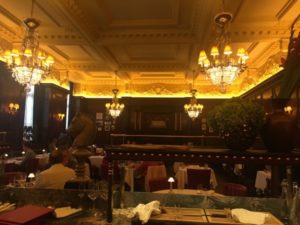 In the main Divan salon

The gal had not been to Simpson’s in The Strand for years, anytime this century, in fact, so it was a thrill to be walking along to the famous restaurant that is owned by, and run by, but operates separately from, the luxury Savoy hotel. The Savoy GM, Philip Barnes, was, in typical PB style, waiting outside the door of what is now called Simpson Divan Tavern. We went in, over tiles that are nearly 200 years old: that is how long this tavern has been here. Back in 1828 it was a smoking room, the Grand Cigar Divan. It got its current name because a caterer called John Simpson came in to run it in 1848 and he built its reputation to such a level that patrons included, at various times, Charles Dickens, Disraeli and Gladstone. 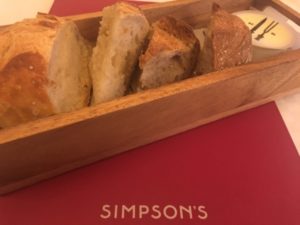 Breads, in a wood box

John Simpson had 21 staff to run the place, which was also known as home of gentlemen’s chess. Rather like gamers today they obviously did not want to stop for lengthy meals so Simpson’s introduced rolling trolleys, which are still in use today, elaborate silver chariots with bulbous shiny tops (today, lamb or Scottish beef, 28-day dry-aged, were on offer). We sat in one of nine historic divan double-banquettes, newly re-covered in green leather – freestanding chairs have freshly upholstered red leather, the four enormous chandeliers overhead have been painted, wall panelling and upper mouldings – like the ceiling, in what Farrow & Ball calls ‘hay’ colour – have been refreshed. Wood flooring now replaces the former carpeting. 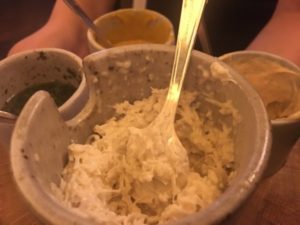 Our Eastern European server was chosen for her charm, and skill – the young man who carved my beef, was, I think, French (he delicately presented it, with cooked garlic cloves, as a fan on the Wedgwood plate that was complemented by Mappin & Webb cutlery). Menus, called Bills of Fare, had come with simple boxes holding sourdough bread chunks. My beef came with roast potatoes cooked in duck fat, and two big individual Yorkshire puddings, and plenty of gravy, and slow-cooked carrots, and other root vegetables, all hay-coloured. Perhaps Victorian diners did not like green vegetables; I must find out. Yes, the fact that this is tradition, updated to 2017, is not only apparent but obviously really popular. Simpson’s re-opened, with a grand party for 400 or so, on Tuesday September 5th, 2017, since when it has more than doubled its pre-update business. It now regularly does a hundred or more just at dinner. 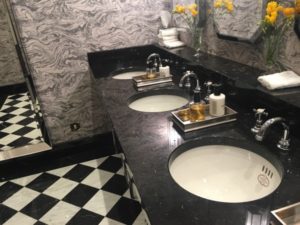 Coming here in daylight the knowledgeable might well take a ten minute constitutional walk, before or after eating, to the Thames – The Savoy, right next to the restaurant, is London’s only luxury hotel that is right on the river, a fact that many Americans and apparently more and more Brits, really appreciate. I hope they all take time to do as I did, visit Simpson’s washrooms. The washbasins are clearly marked Crapper and the flushing mechanisms are operated by high-suspended long chains, as used by the Victorians.