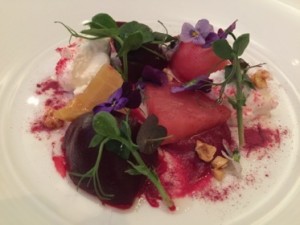 This is just such a beautiful dish that I want to look at it forever – the luxury One Aldwych Hotel just east of London’s Covent Garden has excelled, and yet it has not got its two ‘proper’ restaurants at the moment. The 105-room hotel opened in 1998 with two restaurants, Axis in the basement and, on the mezzanine terrace above the magnetic lobby, Indigo. But Indigo had a tiny kitchen, and as it became busier and busier, the gal was told, it could not cope (the introduction of Charlie and the Chocolate Factory afternoon tea saw 13,000 take-ups in a year, though whether a kitchen is needed for that is perhaps debatable). 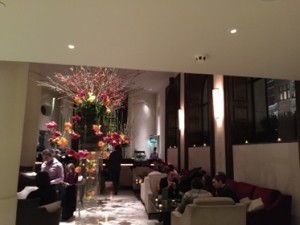 The lobby is a networking magnet

Anyway, on April 19th, 2015, a brand new Indigo, with enlarged kitchen, re-opens. Until then, everyone eats down in Axis and Dominic Teague’s menu is an amalgam of Axis and Indigo, Axigo or Indis, what you will. He is passionate about domestic products. The beetroot is Kentish, the goat curd is Innes, his lemon sole is South Coast, caught this morning.   This hotel actually oozes British-ness, as we shall see. Take the lobby, with designer Mary Fox Linton‘s high-backed chairs, and a lifesize wood sculpture of a lone sculler, with oars (by André Wallace), and enormous, must-comment, flower arrangements. 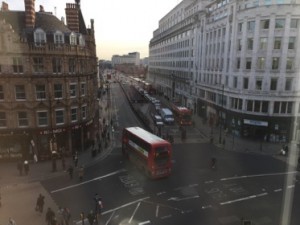 Look out from 210, across Waterloo Bridge

Best rooms here? Anything ending in TEN, the circular rooms at the point of a cheese-wedge shaped building that was the headquarters of The Morning Post, designed by Charles Mewès and Arthur Davis, who did the Ritz hotels in London, Madrid and Paris. I love room 210, only 60 stone steps down to the lobby, another 20 on to the 24/7 gym – take an elevator and you are in a day-glo mirrored cabin. From 210, an off-white haven with pale raspberry curtains and the safe hidden behind a wall-hung painting, I look south over Waterloo Bridge. 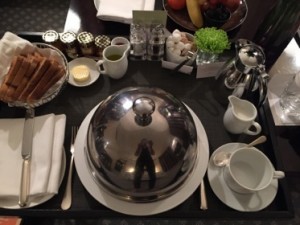 This is a very stylish luxury hotel. ‘What complimentary newspaper would you like?’ is such a change from ‘we have the Timbuctoo Times’ (which means you pay for anything else). Reading material in the room includes sensible, and polysyllabic magazines, Condé Nast Traveler, The Economist, Time Out and Wallpaper. I have ordered a room service omelette as pre-departure breakfast. Look how it arrives, with the eggs under a cloche, and a green chrysanthemum. Many years ago there was a celebrated bar manager at Fleet Street‘s aptly-named El Vino pub who always wore a green carnation in his lapel. Apparently he put a white carnation into a green ink bottle every night before going to bed….