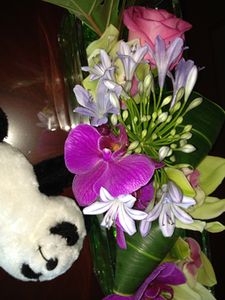 There is something very comforting about familiarity. Newness is exciting and can be, but is not always, wow. And returning to a restaurant to find the overall experience is as good or even better than last time makes you happy, and that word again, comfortable. The same is true with luxury hotels. Shanghai has so many new-wow-oh-my-goodness places, including the stunning Jing An Shangri-La West Shanghai that opens June 29th, 2013 – at 11.01 am, precisely (and, talk about wow, designer André Fu has outrageously put giant chandeliers formed of three tiers of silk tassels above tables in its Chinese restaurants).  Anyway, after so much newness, it is a joy to sink into the car taking the gal to Pudong Shangri-La and unwind. 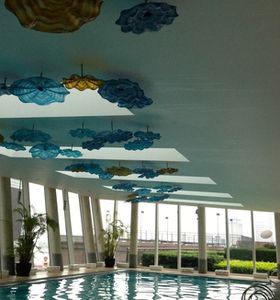 Swimming pool with a ceiling

Immaculate people, the tall lobby that is synonymous with most Shangri-Las  (there are exceptions, as in Toronto, and Jing An Shangri-La West Shanghai’s lobby features curved lines and yet more Czech glass rather than mere height.  Anyway, here at Pudong Shangri-La, there are lots of gorgeous flowers, a Shangri-La standard.  This hotel is celebrating its 15th anniversary, and there will be a party for the 68 (of the 1,300) lovely people who work here now who have been here since the opening in 1998.  There was only one tower then, built in what had previously been farmland. Now there are two towers, a total of 981 rooms, and one sensational swimming pool with glass flowers overhead. 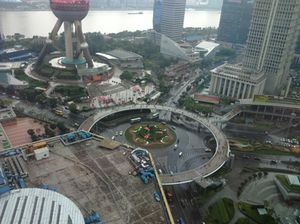 Some feel most at home in the ’62 series, any suite that ends in a 62.  From Lotus Suite 3262, the regular knows that you enter the main room, with a round dining table, go past the kitchen and a half-bathroom to the bedroom, from there you go through a closet corridor to the main bathroom.  From 3262 you look down, at this part of Pudong and across the Huangpu River, with its day- and night-long procession of barges. You really get a sense of locale here. 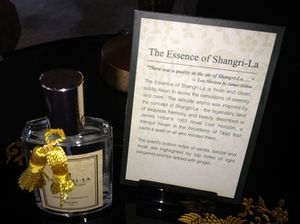 It is sensual staying in a Shanghai classic. I have a Shangri-La room perfume, thoughtfully left for me to spray, in case I do not want any aroma.  The scent is inspired by James Hilton’s Lost Horizon novel, published 1933.  It comes with bottom notes of musk, sandalwood and vanilla.  Its top notes are bergamot, and tea spiced with ginger.  I go to the gym, turn on BBC World and see yet again a trailer previewing great coverage that perfume will be the next differentiator (of what, replacing what?).  Hate BBC World and CNN for the same reasons.  They pad out and waste air-time with trailers for programmes you will generally never see. But, in the gym, I do see this Perfume session, which includes a real New York eccentric called Christopher Brosius, a one-time taxi-driver who now runs I Hate Perfume. 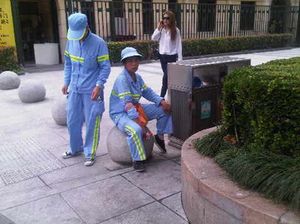 It would be tempting to do a good run outside, to see what is going on. Shanghai is meticulously clean, and cleaners, usually women, are out early, and all day long, in their distinctive lavender and yellow uniforms.  I remember running early morning in Buenos Aires, when the street cleaners, mostly men, are people washing their own bit of pavement, with high-pressure hoses.  Skip the hose, girl.  Here the cleaners work methodically with long brushes and dustpans. I realise that the inside of the hotel is so spotless you could eat dinner off the floor but I have never seen anyone cleaning. Is it done at three in the morning? 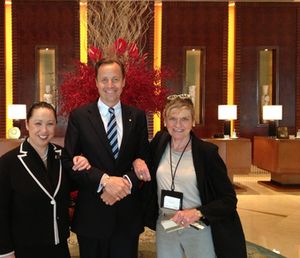 Yes, familiarity strengthens loyalty.  At this luxury hotel you can sink back, and take a deep breath. Butler James has the elevator button pressed by the time I get there, to go to the next meeting. Down in the lobby, by some extraordinary coincidence the big-boss, Ulf Bremer, from Dusseldorf, happens to be there to say goodbye, as does Judy Leung, from Vancouver (she is boss of the Horizon Club lounge).  Off I go, only to return five minutes later to pick something up.  He, but not she, is still there – did he suspect I might be back so soon?