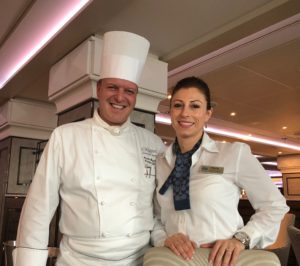 Every day is another learning experience, especially when the sunrise says wow… At Iguazu’s premier luxury hotel, Belmond Hotel das Cataratas, the chef, Fabio Del Antonio, is a near-professional musician, but Ronald Marczak goes one further. As executive chef of the 490-passenger Seven Seas Navigator, he not only organises his brigade of 47 but he does cooking lessons that are more professional than most televised cook shows – and interspersed with showing how to make béarnaise from scratch he sits down at the stage piano and plays at concert hall standards. ‘Don’t cry for me Argentina’ is a perfect entre’acte, says the gal, while waiting for the potatoes Lyonnaise to absorb all the jus. 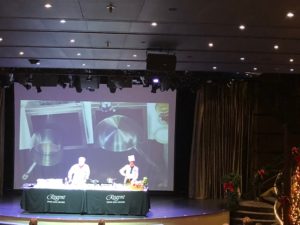 Cooking demonstration in the ship’s theatre

This versatile performer has an amazing story. Everyone in his family plays something, but having seen how tough it was for his older brothers to have to rely on music he decided to look for something else. His family emigrated from Verona to a rural farm in Brazil when he was little, so presumably music, in his case the violin as well as the piano, filled many hours. Years later, while studying back in Europe, he got a part time job in a hotel and became hooked, first by hospitality and then by the kitchen (‘I knew it was me’, he says with his always-there smile). He studied in Lyon, with Paul Bocuse, and worked in such restaurants as The Willard Room at Willard InterContinental, Washington DC. 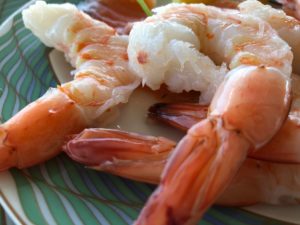 Simple ingredients are sometimes the best

In London he worked with Gordon Ramsay – tough but fair – and in 2003 Michel Roux, then consulting for Celebrity, enticed him to sea. He progressed to Silversea and Azmara before joining Regent Seven Seas, and he still has the enthusiasm of a youngster transported to wonderland. You can see he gets a genuine thrill from passengers’ appreciation when a dish is brought out, and he does not seem to mind one little bit if anyone personalizes a suggested dish (I asked for a salmon with pilaf and beurre blanc to be rice and sauce free but added asparagus and broccoli, and it came exactly). He uses the best ingredients, often simply prepared, though other dishes are highly complicated. Kosher is simplified by passengers ordering, before a cruise starts, from a special menu, prepared in a dedicated part of the kitchen. 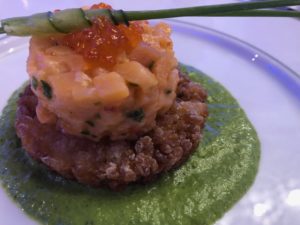 Salmon tartare on a spinach purée

During his 14 years at sea he has seen greater finesse in menus, and slightly smaller portions – some still want to eat to get value for their money but the majority of travellers, by far, appreciate cutting back on waste. There are more and more healthy options, including dishes inspired by the company’s wellness partner, Canyon Ranch. He works seven days a week, four months on and two months off. As soon as he disembarks he flies to Brazil to catch up with immediate family, and at some point he takes his mother back to Italy to see extended family. Presumably Ronald Marczak also catches up on his scales (piano rather than fish), which he never has time for at sea. NOW SEE A VIDEO OF THE PIANO-PLAYING CHEF