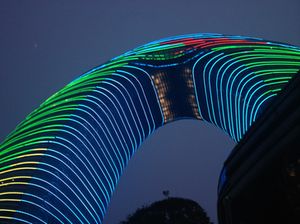 Looking up at the oval ring, at dinner

We need a new category of architecturally unique luxury hotels. There are definitely two members already, both iconic. Dubai’s Burj al-Arab is the symbol of that Emirate (sorry, Burj al-Khalifa, you do not ‘do’ it in quite the same way, you are tall but, architecturally, that is all). Frank Gehry’s Marques de Riscal, in Rioja, is certainly included. So too, says the gal, is the extraordinary 29-floor oval ring, standing vertically out of the water, that is Sheraton Huzhou Hot Spring Resort, in Huzhou village (a mere 2.57 million population), 90 minutes’ drive west of Shanghai. 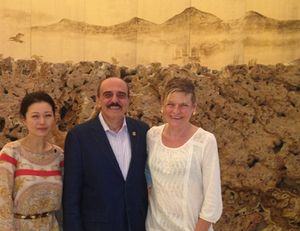 Stephanie Choi and Claudio Nardini, by jade and gold

This is a totally amazing structure, designed by MAD Studio’s Ma Yansong for millionaire entrepreneur Zheng Shenghua, who has made his fortunes from electronics and real estate. Ma apparently trained with Zaha Hadid, and it shows. His buildings here flow, from the vertical oval to its adjacent horizontal circle, housing hotel restaurants and public areas. Designers HBA have used acres of precious and semi-precious stones, including whole columns of Chinese citrine, floors of snow-white Afghan alabaster, blue emeralds and sapphires from Italy. A giant white-jade rock stands in front of a gold-leaf wall: jade+gold = wealth and prosperity. 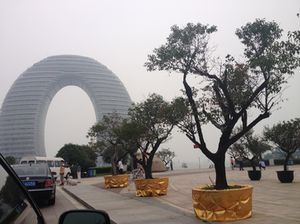 First view of the hotel, by daylight

Huzhou, which is still a silk-producing area, has no airport. Its year-old rail station is big enough to accommodate all the residents of a city as large as another Hu, Houston. Thirty minutes after leaving the station, the hotel suddenly comes into view. I gasp, and my minders smile, always amused at first-time reactions to the 18-month old building. The 289 bedrooms are in the two vertical towers – later, the joined top floors will have the Presidential Suite, and meeting rooms. The oval does actually continue under-water, where two floors hold utilities, a superb Shine spa (love its Germaine de Capuccini products) and a pedestrian people-mover. There are also, by the way, 35 separate, detached villas, eight with pools. 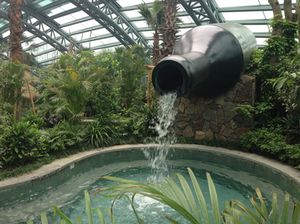 One hot spring is fed from a wine bottle, for detoxification

All villas also have hot springs, of which there are way over a hundred in the entire resort, which also includes a marina and rose garden and wedding island and helicopter pad and so much more. All the thermal water is piped in from a distant mountain, presumably adding to Mr Zheng’s overall bill. He also has invested in a 200-ft diameter hemispherical multi-facetted plastic dome, similar to The Eden Project in UK or to Singapore’s Garden in the Bay: here the tropical garden contained in the dome is complemented by 26 of the thermal pools (all different shapes and sizes, and one, fed by a giant wine-bottle sculpture, has wine added for extra detoxication). 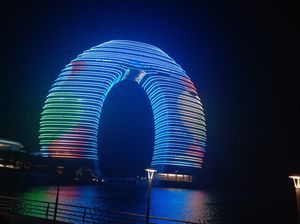 Zheng Shenghua personally insisted on having a Lobster Tank restaurant on the garden’s terrace – there are also Chinese-Japanese, and international, eating places. Lobster Tank is in an all-glass structure, with five interior tanks holding the lobsters. Sit on its terrace and gaze, transfixed, as the shape of the oval above you moves from one colour sequence to another. In all there are 79 horizontal rings, from the water surface to the top, and these have in total 433,390 LED spots, their sequences programmed by the hotel’s own specialists. When we have finished eating, hotel GM Claudio Nardini, who has always been a bit of a showman ever since he worked with Eric Morley before he, Morley, set up Miss World, suggests moving to a ringside spot for the ‘real’ show. 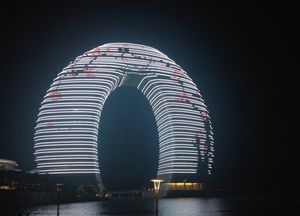 .. give way to cherry blossom

We are driven appropriately in a bright apple green buggie, a mere 300 yards to the approach to the hotel. There we are in awe again, as the oval features balloons, and then cherry blossom, and then the Sheraton logo, and then a paint brush emulating ancient calligraphy. I think what a unique opportunity to be able to offer companies the chance to have their logos shown, but this is indeed a unique luxury hotel. Ah, gal, back to earth. I need cash for my ongoing rail ticket. Yes, there is an ATM at the rear of the lobby. The pin-code pad is so well covered you have to do it by instinct as you cannot see the numbers. A cavern opens up and you have to put your hand right in and down to get your money (will the jaws snap shut and hold me, forever?) You then have to push Exit to get your card back – it would be too easy to leave without the card.