Underground in Hamburg does not mean either visiting Sankt Pauli and Reeperbahn, cavorting in teenage clubs with few clothes on or lying in a coffin wearing only a shroud. There are lots of alternatives, all providing luxury experiential memories…

At the divine Louis C Jacob hotel (a Leading Hotel of the World), miles away from the city centre along Elbchaussee to Nienstedten, there is a subterranean ice-house that dates back to 1850.

Go down wrought iron spiral steps into this brick hemisphere and the acoustics are such that the tiniest whisper reverberates around and around.  Back up in your room, ideally facing out over the Elbe, directly outside, and you look across the river to the giant Airbus assembly plant at Finkenwerder.

Enter the Mövenpick via a 50-foot art installation tunnel (behind is the original 1910-vintage, 17-floor water tower)

Back to the main city, and to the 17-floor octagonal watertower (1910 vintage) that is now, somewhat miraculously, the Mövenpick. Thank goodness not only the original exterior but masses of the old interior brickwork remains. Head down to the gym and you feel as if you are pedalling two centuries back.

Return above ground, to the all-purpose restaurant with full-wall windows looking into Sternschanzen Park, and you know it is 2011. Leave the hotel, via its 50-foot entry tunnel that is one entire installation art piece – light and music included – by Ulrike Böhme and you think it is tomorrow… 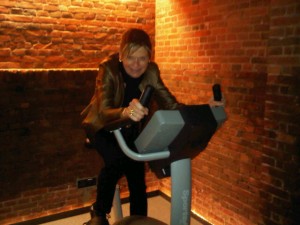 Pedalling in the basement of the original-brick water tower

But the girl has not finished luxury Hamburg underground. At another Leading hotel,  Fairmont Hotel Vier Jahreszeiten, from room 405 it is 105 beautifully carpeted steps down the main 1897-vintage staircase to the lobby (a theatrical setting of ceiling-high panelling, ruby upholstery and dozens of lighted candles, and vases of white lilies – plus Louis Vuitton and Wempe jewellery displays).

Go down a few more, uncarpeted, steps to the basement below, to Doc Cheng’s, a fabulous update on the theme around a traveller ‘invented’ by a creative genius called MPS Puri in Singapore towards the end of the last century.  This Doc Cheng’s is a scarlet-hued haven, of comfortable lounge and packed-full adjacent restaurant.

Down in the open kitchen of Doc Cheng's, at Fairmont Hotel Vier Jahreszeiten

This is where the knowledgeable Hamburg resident comes for Asian food (no, if you want a hamburger go elsewhere). And one is sure that such hotel-gold-book-names as President Clinton and Robbie Williams are also Cheng-addicts.

The gal sat at a high wood table right next to the open kitchen – which she had to visit, of course. First came a three-tiered étagère bearing sashimi and sushi and tempura and other delicacies.  Next, a whole duck was skilfully carved tableside.  It was breast first, leg as second course, with Asian flavourings.  And then it was back upstairs, to the real world, whatever that is…