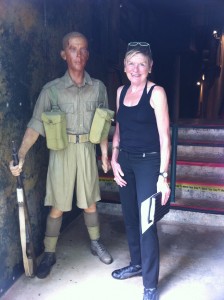 A mannequin welcome to the Singapore bunker

Well what a surprise every new day seems to bring, as long as you keep your eyes open.  The gal learns, in Singapore, about the fall of Singapore, February 15th, 1942.

What is now known as ‘The Battle Box’ was the bomb-proof bunker, 27 feet under Fort Canning Hill, that was the headquarters of the UK’s Malaya Command headquarters during World War II.  It was here that General Percival decided to surrender Singapore to the Japanese. 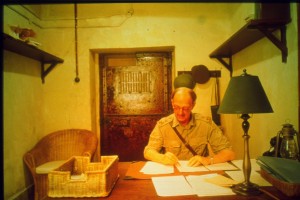 The Commander of the Battle Box, made by Tussaud’s

The bunker has 26 rooms, and as well as the main entrance there was one emergency cat-ladder escape that now comes up into Fort Canning park above.

Whereas the famous US bunker below that luxury hotel Greenbrier WV, a couple of hours’ drive from Washington DC, is not generally open to the public (though of course the gal has seen it), this one can be visited, daily from ten o’clock.  The tour is well worth it. 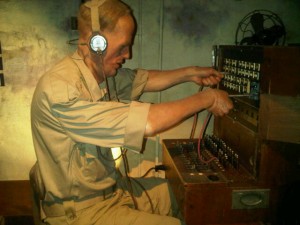 Half a dozen of the rooms have amazingly lifelike wax mannequins made by Madame Tussaud’s in London.  Some of them actually move.  The telephone operator leans forwards to put the connection from one socket to the next.

In another area, a man in khaki moves a pusher forward to show how the enemy is advancing.  It is spooky.  I know military historians, especially of WWII, must love this place, and Singapore school kids visit in droves as part of their history lessons. 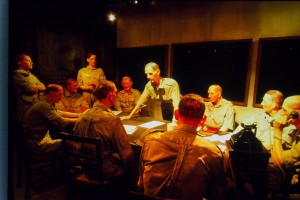 After that, it was time to explore Hotel Fort Canning.  The former military building, finished 1926, is now an 86-room hotel-in-a-park.

Full-wall windows allow you to look straight into the greenery that makes the hilly terrain of Fort Canning Park so memorable – and, amazingly, you are only five minutes walk from Dhoby Gaut at the end of Orchard Road.

As well as the greenery, other notable features here are the four glass-topped pits in the floor of the main lobby. They hold artifacts from the Majapahit era of the 14th century, and of UK expats in the 19th century. 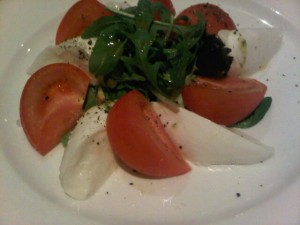 Caprese by the Garibaldi Group

A main reason for coming, however, is the stunning Italian restaurant, Gattopardo Italian Grill and Pizza Bar.  It is run by an outside company, the Garibaldi Group, and if all their dining venues are like this – wow.

Loved my tour of the glass-walled wine room, with some 400 labels (all, except Champagne, Italian).  Loved watching the Italian chefs cooking and loved the result. 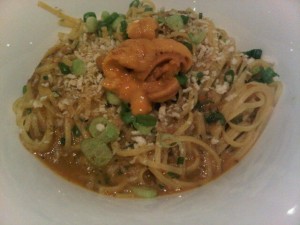 After that long flight I started with Mozarella di Bufalo and went on to a simple Capellini alla Moresca, angel hair pasta with grey mullet Bottarga roe and sea urchin.

In honour of tonight’s chef, Lino Sauro, we had to have Sicilian wine – the best on the list here is 2005 Donnafugata Contesse Entellina Mille E Una Notte Rosso Doc.  Question, why are Italian wine names so often difficult to fathom out?  That is something to learn another day.