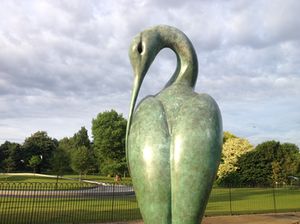 Simon Gudgeon’s Isis, by the Serpentine

Early morning, in London, and the gal was running round Hyde Park’s Serpentine, the snake-like lake formed in 1730-1733 after King George II’s wife, Queen Caroline, said a lake would beautify the park, so the Westbourne river, which flowed into the Thames near Victoria, was suitably dammed. Today, far away from her usual setting of luxury hotels, the gal watched people in hats and goggles furiously doing laps – members of the Serpentine Swimming Club can swim until 9.30 a.m. and the public can pay to use the water from 10.30 a.m.   Club members swim year-round – their first Christmas Day swim was 1864. They were watched by Simon Gudgeon’s ten-foot bird sculpture, Isis. 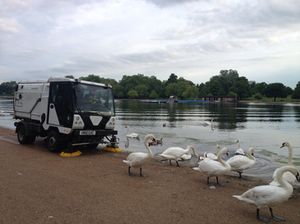 At its base are 1,000 names of donors who helped raise £2.2 million to build the Isis Education Centre, to encourage city kids to explore nature. Simon Gudgeon, with the aid of Paul Green, President of the Halcyon Gallery, gave the sculpture to the Royal Parks Foundation.   I wonder what Isis, the statue, thinks of the flotilla of ducks and swans and geese being shoved away by an automatic cleaner that is, very slowly, moving along the Serpentine’s edge to sweep it clean of all their droppings. 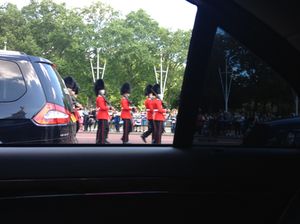 Going to change the guard

There was so much going on this morning. Hundreds of mounted soldiers filed by, four horses abreast, on their return from a dawn rehearsal for Trooping The Colour, which is not scheduled until Saturday, June 14th. There are generally soldiers from Knightsbridge Barracks out riding, too, without ceremony. Later, I saw some in full dress returning from doing sentry duty at Buckingham Palace, now facing a mass of thousands of tourists. Last time I was at, or rather outside, the Palace it was the day after Prince George’s birth and I was alone, apart from dozens of police and piles of debris from celebration revellers. 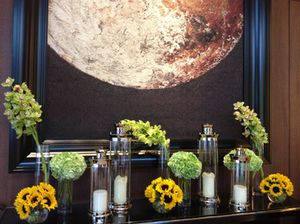 Today, however, I ran quickly back to 45 Park Lane, The Dorchester Collection’s discreet, unlash, under-the-radar luxury hotel. There are flowers and art in its foyer, taller than it is wide. Tables of private equity gurus, from offices in Mayfair just behind the hotel, were meeting over omelettes and great coffee. My reason for being in London today was for Nick Perry’s Ultratravel Awards, which have grown to include an invitation-only Ultratravel Forum, the whole event at The Dorchester. This was the chance to hear bullish comments from Four Seasons’ Chris Norton, and Belmond (né Orient-Express) boss John Scott III, who pointed out that when he travels en famille, he needs three connecting rooms because he has two sons and one daughter. 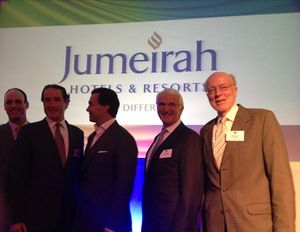 The hotel industry bosses were controlled, on stage, by Chris Hartley, who could suitably give up running Global Hotel Alliance to replace Larry King on CNN (Chris is a born interview moderator). Funnily enough Larry King’s short-lived successor, Piers Morgan, was also a speaker, on a panel of four media who all spoke simultaneously at times. The three women hated butlers, hated fuss, hated service that is in your face. Piers Morgan by contrast loves butlers. The Forum finished, and half an hour later the awards evening started, with lots of bubbles to calm the nerves of those hoping to win a top award. Who was lucky? Rosewood London is best new hotel, and The Upper House, in Hong Kong, is best hotel in Asia, say readers of the UK edition of Ultratravel, who otherwise are rather conservative. Four Seasons won best hotel in the Americas (New York) and Europe (Paris), Cape Town’s Cape Grace is best hotel in Africa but Burj al-Arab, Dubai, is best hotel in the world. 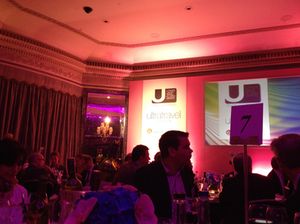 British Airways is best long-haul business class, and Silversea is best small cruise line, so I felt right at home, and Four Seasons, overall, is the favourite luxury hotel brand. And with that all over, the 450 guests seated at teal damask-covered tables, with matching napkins, had dinner meticulously served, and wine poured.