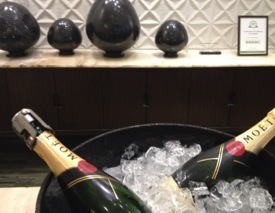 The first time the gal met Bernard de Villèle he was wearing full morning suit, with black long-tailed coat over striped trousers. He was then something or other at The Lanesborough, London. Next he wore tropical clothes when he ran La Samanna on St-Martin. Now, after a few hiccups, he is back in what he keeps on calling ultra luxury as boss of The St Regis Mexico City. The gal went to see what he means by ultra luxury. Arrive, and there are bottles of Moët waiting on front desk, and a butler, in full regalia and white gloves, in fact has a chilled flute just-poured, its bubbles still bubbling away. The setting here includes high ceilings, light, cutting edge design by Yabu Pushelberg. 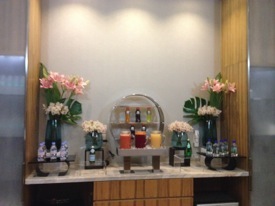 Snacks in the spa-wellness area

My bathroom has a fluffy white robe and enough towels to start a spa. Talking of spas, the wellness area here, on the 15th floor of the stunning 31-floor silver-blue diamond-shaped structure that houses the 189-room on its lowest floors, the wellness area has an extremely elegant snack centre. Anyone care to beat this for luxury? I spoke to a regular guest, who loves this hotel for its quality but also for its simplicity. In Jean Georges Vongerichten‘s J&G Grill, if you want your Arctic Char simply grilled rather than being titivated up with bits and pieces, chef Mike Calderón will do it, no problem. (If you want to recreate your wedding breakfast from a few hours back, give the hotel’s own chef Guy Santoro six hours’ notice and he will oblige.) 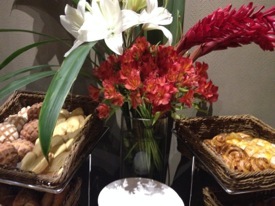 Breakfast is in Diana, named for the statue in the centre of the Reforma circle, immediately outside. You can breakfast on the terrace, going in to a buffet that has lots of fresh flowers – more ultra luxury. Breakfast in your room and you can splurge on an Elegant set, continental with poached eggs, hollandaise and smoked salmon on an English muffin, and half a bottle of Veuve Clicquot (the bottle in room 1419, the St Regis Suite, is also VC). Go for an austerity Astor breakfast and you find it is a usual-American, which reminds me I must find the connection between that unique American who became first female MP in the UK Parliament and the Mrs John Jacob Astor of St Regis fame…. 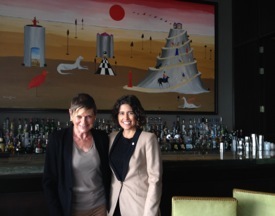 The original St Regis, New York, was built in 1904 for David Astor, who drowned on the Titanic. His hotel had, still has, a magnificent Maxfield Parrish mural of King Cole (Old King Cole, not Nat) behind the counter of the King Cole Bar. That was where bartender Fernand Petiot invented the Bloody Mary in 1934. To celebrate its 80th birthday, this October all St Regis properties worldwide will throw Bloody Mary bonanzas.   Here, at the luxury St Regis Mexico City hotel, there is also a King Cole Bar, and its bespoke behind-counter painting is by Pablo Weisz Carrington, son of Hungarian photographer Emeric Weisz and English painter Leonora Carrington – and the special Bloody Mary here is a Sangrita Mary, made of Mezcal (like tequila but, from the maguey fruit, stronger and smokier) with orange juice, lemon and chili.