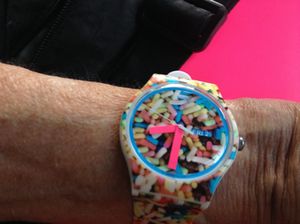 Honestly, says the gal, buying this Swatch – at duty free leaving Heathrow – was one of the best investments ever (on a par with a reversible opera-star raincoat that fits into a tiny carry-bag, bought from a mail-order company somewhere in the great US of A a decade ago, and My Man, never bought but somehow acquired a very-short time ago…).   Anyway, wear this watch to check in at any luxury hotel around the world and it makes an impact. People checking you in notice, and comment. Others waiting to check in may notice, but generally do not comment. 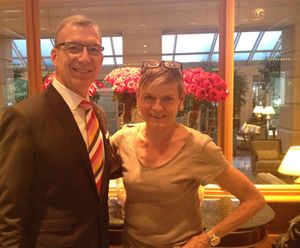 Mind you, as someone who spends at least 300 days a year in hotels, I feel qualified to comment on the growing interaction within hotels, between customers, also known as consumers or ‘guests’, a misnomer in that they are paying for the experience, between them and their ilk, and between them and the purveyors of hotels’ services, also known as associates, colleagues, team members and, famously, at Ritz-Carlton as ‘ladies and gentlemen’. Perhaps it comes from the luxury cruise industry, where everyone greets everyone. Anyway, here I am, with watch, at Fairmont Washington and there is no-one I want to greet more than the guy who ran it until Friday August 29th, 2014, Mark Andrew (he has left for pastures new, in WA). 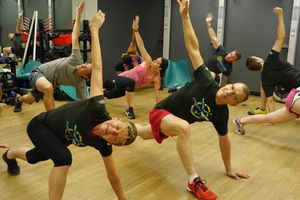 I had not, mind you, been aware of what I was in for. Mark Andrew had invited me to come to a CrossFit class in the hotel’s really SIGNIFICANT – for which read SERIOUS gym. Being a President’s Club member, workout gear in my size was waiting in room 524, plus a CrossFit shirt. Oh gosh, I read a welcome note. I was supposed to be there already. I changed clothes, rushed down and immediately found myself pumping iron, push, twist, turn, ten more times, twist again, 15 times. 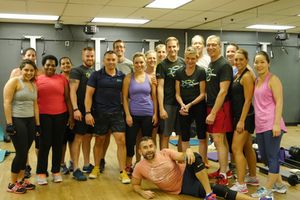 .. and afterwards, hotel team members and others

The really impressive thing, as this group photo shows, is that about half of the masochists who took part in – who survived – this class are hotel employees, some of whom do it three times a week. Top marks to this luxury hotel for realising that healthy colleagues mean more enthusiastic workmates and, ultimately, happier guests and thus more money. Let me also say that afterwards, after a quick shower and change, it was time for the Pinot (Four Graces 2012 Willamette Valley OR) and a pollinator salad in a jar, benefiting DC Public Schools’ Junior Beekeepers, then a sustainable salmon. And by the morning, ready to fly off yet again, I felt on top of the world…