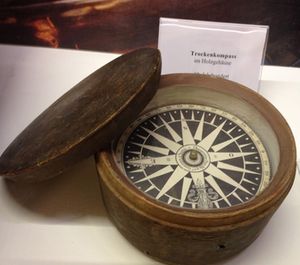 One of the historic compasses displayed…

On May 20th, 2014, a very special event takes place at the Kempinski Hotel Atlantic, the luxury hotel at the south-east corner of Aussenalster lake, right in Hamburg city centre.  On that night, says the gal, hotel GM Peter Pusnik hosts the official opening of the hotel’s unique collection of maritime memorabilia, so suitable in this city of sea-faring (the city of Hamburg owns 36.9% of Hapag-Lloyd). For the last three years he has been sourcing souvenirs, from the city’s shipping giants, and from individuals. There are lots of sextants, and ancient compasses loaned by Cargo Trans Pool CTP, the shipping-marine-logistics-support service. 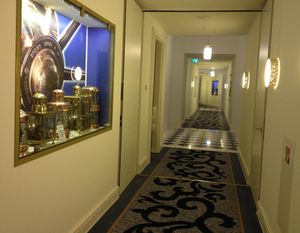 .. in 76 vitrines on upper corridors

Stroll the corridors of the five-floor hotel and in all you pass 76 vitrines, all filled differently.  I wonder what they held when the hotel opened, in 1906?  It was built at the request of Albert Ballin, General Director of Hapag, then often called the Hamburg-America Line, so that his first class passengers could have somewhere decent to stay before they sailed the Atlantic (hence its name). He was certainly a pioneer. It was he who personally escorted the first-ever ‘cruise ship’, which rather than sailing A to B, to a set destination, merely cruised the Mediterranean. The hotel was a splendid affair, and on the first day, the hotel’s guests included Prince von Bülow. 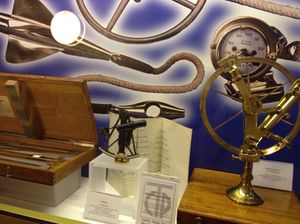 Objects poured in from all over the world – one owner personally drove from Scotland to hand-deliver a model ship he was donating.  There is a marvellous collection of menu covers loaned by Dr Stefan Behn: these all date from sailings with Hapag during the period 1891 to 1914.   He has also loaned delicate all-white china from Hapag’s ship Ariadne, 1956 to 1958, and in another vitrine are menus and blue-edged china, somewhat more substantial, from the Europa, 1981-2013 vintage (same lenders, who also, from the Reliance and Resolute ships of the 1927-1937 era, come up with high-stemmed glasses, and a gold-logoed china chamber pot). 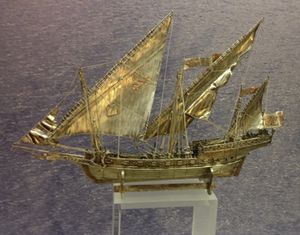 Several vitrines display model ships, which included this silver-gold treasure, dating back to the 18th century and loaned by Frau Kretschmann. By contrast, Yacht Moments have contributed a miniature of the 46-metre tri-deck Sanlorenzo 46 Steel, designed by Viareggio Division Style and on sale – the real, five-cabin beauty – for €14.9 million (features include a garage, toy and games room, and space for nine crew).  Traditional tall-masted sailing vessels include the 136-passenger Hussar, later to be renamed Sea Cloud I, built 1931 for the founder of E.F. Hutton brokerage and his second wife, General Foods heiress Marjorie Merriweather Post (Hutton’s first wife Blanche had died in the 1918 Spanish flu epidemic and their only son died in a riding accident at 18). 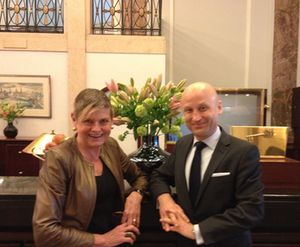 GM Peter Pusnik is curator of this unique collection

At every stage you want to go off on a tangent, to learn more about what is in these 76 vitrines, and no wonder Peter Pusnik has become so enthralled during the years putting this collection together.  It will undoubtedly attract maritime historians and mere hobby sailors from all over the world.  On the opening night, Herr Pusnik will become Der Kapitän, complete with nautical uniform, and during the coming months he will be busy welcoming the growing number of cruise passengers who stay here pre-cruises leaving from Hamburg, especially for the Baltic.  In 2013 over half a million sailed out of this port, and for cruise fanatics a good time to be in town is the annual Hamburg Cruise Days, like a convention of cruise ships.  This year, August 1-3, 2014, six ships will be taking part. 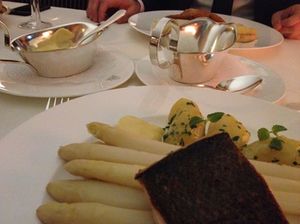 But also head for Hamburg now, or as soon as you can.  Its famed asparagus season, which runs through to June, started two weeks early this year, thanks to the mild winter before. At the glorious ship-like Atlantic Restaurant in this luxury hotel, you look out over the water of Aussenalster, and the maitre d’ pours Schloss Reinhartshausen 2011 Riesling from a magnum.  And what would you like with your asparagus?  Our table gets asparagus, white and plump, with little boiled potatoes, and our choice of grilled salmon or seabass, and the hollandaise on the side is, of course, not-negotiable.