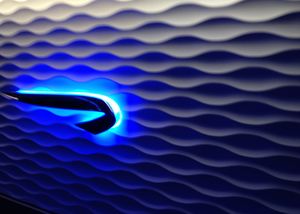 Logo on the front of the 28-person cabin

As the gal’s main hero points out, it is a paradox that in today’s world people want bigger and bigger television sets and yet they rely for ‘life’ on smaller and smaller tablets and tiny smart phones.  By the same token, luxury hotels offer larger and larger bedrooms, and especially bathrooms, but wise airlines know that smaller can be best. A private jet is ideal for some, although not for environmentalists. Commercially, British Airways should win lots of awards for dividing the interior of its new A380 into small compartments.  Fortunately that significant logo, the Speedmarque, is on the front of your cabin to remind you where you are. 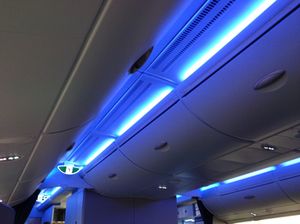 I became fascinated by the history of this logo when I found myself on the inaugural A380 flight from Hong Kong to London Heathrow.  Here is what I found out.  The first swirl was done in the 1930s by Theyre Lee-Elliott, who specialised in posters for London Underground. From the 1950s, the marque even appeared on tailfins of BOAC, precursor of British Airways.  It was known then as Speedbird, which was the airline’s call-sign to identify an aircraft. In 1997 the logo evolved to its present shape, easily recognisable, and highly protected. 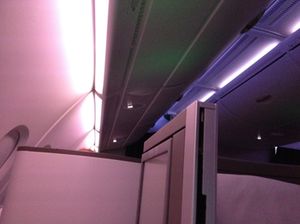 Back to the flight.  I can report that having been sceptical of the A380 – who wants to fly with 500 others and all that – I was completely won over.  The flight was a delight. I was upstairs in the forward cabin, which had four rows of seven Club (business) seats.  Only 28 of us therefore had our own little world, with the Speedmarque in front. I was facing rear, which I really like, and in a favourite seat, by the window, which meant I had three vertical storage bins to put things in. Bins on the 747s are just that, square bins, difficult to clean.  These A380 bins are sculpted, easier to clean and more stylish. Everything about the interiors is more stylish and rounded, somehow. 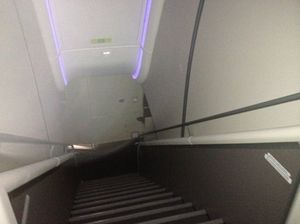 Looking down the front stairwell

The hues in the cabin evolved from soft blue to soft pink. The windows are much bigger than before (though they do not have the sexy blue Venetian blinds of First Class – where, incidentally, the seat surrounds are much higher, for more privacy).  I was lucky.  The divine top attendant on board, the marvellously-named Mary O’Reilly-Bell, showed me round the whole plane. There is a big spiral staircase at the rear of the whole, and in front what can only be described as a 15-step Red Carpet straight stairway, with lovely neon lighting curving down both side. Either side, at the top of this straight staircase, are washrooms that are honestly the biggest in commercial aviation – they are five times the size of normal ‘toilets’, with proper benches and full-length mirrors (ideal for the Mile High Club?). 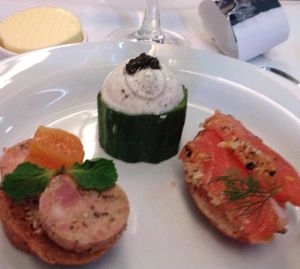 Long-established television travel pundit Judith Chalmers (‘Wish You Were Here’) and her husband, Neil Durden-Smith, were in the seats next to me.  What a marvellous plane, they both said.  I must agree, completely.  The designer has done a fantastic job, from the customer point of view.  I also love the fact that all the women in the 24-strong flight attendant team wear lovely forage caps at boarding and disembarkation.  Oh yes, I ate pretty well too.  BA026 leaves Hong Kong at 11.15 pm so it is assumed that passengers have already eaten (although I had come in by Jetfoil from Macau so had merely nibbled in the Qantas lounge). They therefore presented a Champagne Supper, with three types of Champagne, and canapés to start. 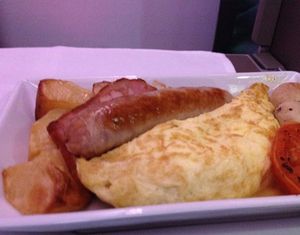 .. and, after a great night’s sleep, an English breakfast

Come on, what are the negatives of this new plane? Well, in the past British Airways always left from Hong Kong’s gates 15 or 16, directly outside the lounge.  Now the A380, which requires airbridges direct both to its upper and lower levels, leaves from what seems like another continent.  It took ages to find gate 60.  What else can I say?  Nothing.  I had an excellent seven-hour solid sleep (oh these really-flat beds) and the English breakfast before landing was outstanding. If luxury hotels break up their entire size into more compact units like this plane offers, they can give even better customer service – which of course is what many are doing with their club ‘hotel within a hotel’ concept.