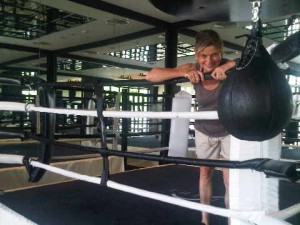 The Thai boxing ring at The Siam, Bangkok

Around the world right now there are millions already preparing for August 5th, 2016, the start of the Rio Olympics.  It is a funny thing that all that was tacky about London 2012 – the ghastly, aggressive logo, and the tarty officials’ uniforms – has faded into insignificance.

What mattered in London was the spirit, and let us hope it gets every lazy slob out there working to get fit.  Being in Thailand, the gal thought she would settle for a bit of boxing, and fortunately The Siam has its own ring. 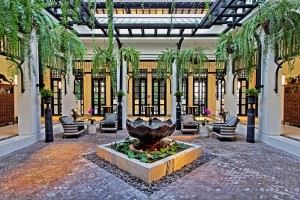 Ah, The Siam, what a beauty.  This is how it will look, as dusk falls, when it opens officially September 1st, 2012.  It has been six years in the making, and three in the actual building, and it over-ran budget by 250 percent.

The story is simple.  Singer Kamala Sukosol, who with her family already owns some cash-cow hotels in bling Pattaya, wanted to do a hotel on a plot the Sukosols own riverside in Bangkok. 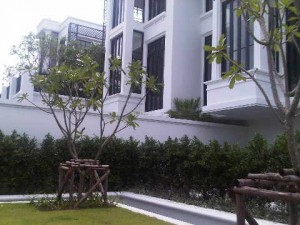 The resulting building is by Bill Bensley, a friend and colleague of her son Krissada Sukosol Clapp, generally known as Kriss or Noi. The two had continually found themselves bidding against each other for antiques in private sales in Bangkok.

Bensley has long been known as an arbiter of Great Taste.  Why not ask him to be architect, interior designer and, while he was about it, do the gardens too?  Most of the buildings are white, and new. 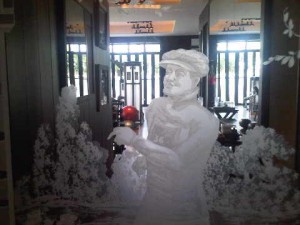 The gym doors have panels of 1930s etched glass

But of course Bensley has been mindful of Kriss’ collection. A whole room seem to have been built just to display, in ceiling-high double-sided cases, his hundreds of old cameras (well, the word antique can apply to a wide spectrum of artefacts).

Nearby are four old typewriters.  The screening room has fixed-rows of tip-up seats, faded red now, once glorious in a French cinema somewhere.  The doors to the gym, and the Thai boxlng ring, are rather charmingly formed of etched glass showing athletes from the 1930s, again French. 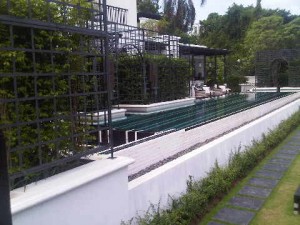 The main pool, near the river

There are some signs of the kind of international design that you find anywhere, say the outdoor infinity pool in lush gardens. Elsewhere you know you are in Thailand: a bar is upstairs in a tiny, dark, Thai house.

And some areas are, well, unique:  dozens of tubas hang overhead one of the restaurants. The Thai cooking school is in a cubby-hole in one of the older parts of the place. 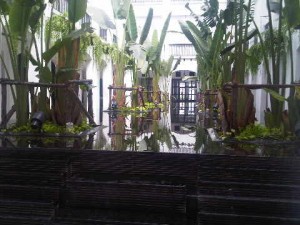 The atrium, based on Musée d’Orsay, has a decorative pool, with palms

The public areas are not so much vast as lengthy.  The lobby leads to a walkway to a three-floor open atrium, rather like an open-sided greenhouse with real palm trees in it.

These stand in another pool, an ornamental pool about 30 feet long, raised on the top of seven black granite steps all round so water trickles down.

From this atrium another walkway leads to other areas, perhaps down to the spa (which is great, by the way, and there are separate men’s and women’s hammam bathhouses). 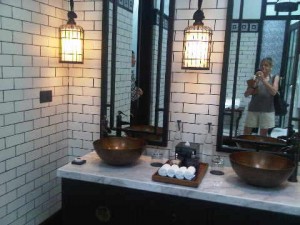 The majority of the 39 bedrooms are darkly romantic – only the bathrooms have windows to the outside world, but the rooms are filled with mementoes, perhaps of elephants and old prints.

The separate, detached pool villas are for those who want to look out, and up – these villas have enclosed courtyards with plunge pools and, up spiral staircases, your own sunning area with loungers.

Whichever room you choose, the bathrooms are totally divine, a bit retro, lots of white tiles with black outlines, Art Deco at its best, and a memory, a hint, of the bathrooms in Andaz, back in London. 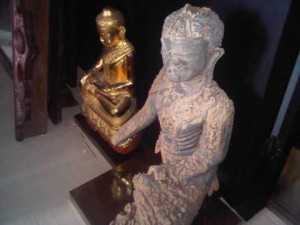 There are statues and other treasures everywhere …

Everywhere, of course, there are treasures.  There are lots of statues. The entire history of Siam, the country not the hotel, in book and drawing form is displayed in the Library, which also doubles as Business Centre, with the biggest Macs imaginable.

Oh yes, and one of the most important treasures of all is the hotel’s GM, the lovely Jason Friedman, who many in Thailand know because he opened Four Seasons Tented Camp up in the Golden Triangle (he took me mahout-learning, on elephants, and Jason’s mount turned belly up in the water and ruined his beloved Tod’s).

Then Jason went to open Qualia, in Australia’s Whitsundays, and he was having dinner, in Bangkok, with Bill Bensley and that is how he came to be here. 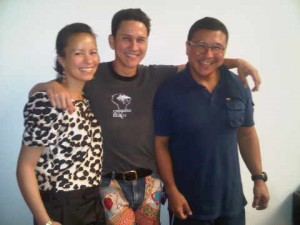 ..collected by singer-filmstar Kriss, seen here (centre) with his wife Melanie and his brother Sukie

Except he is not here, at the moment.  He is celebrating his birthday with his twin brother, a fashion photographer, on Mustique.  But I am in heaven, anyway.  I am being looked after by two of the Sukosol children.

Sukie started Thailand’s most successful record label which he sold on to Sony.  He is project manager here.  His brother Kriss, youngest of the four Sukosols, is creative director of the hotel.  Fascinating guy (look at his jeans, with their patterns…).

After graduating from Boston University he went on to study drama in New York. Next, he became lead vocalist of indie-rock band PRU, and he won MTV Asia’s favourite Thai artist award and Thailand’s best actor for his lead in the 2006 thriller 13 Beloved, sold on to the Weinstein brothers.  Undoubtedly he will be a big name at the 2012 Bangkok Film Festival, November 16-25. 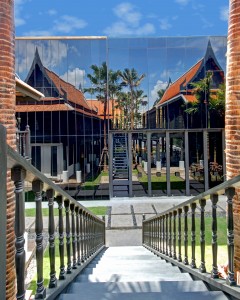 In addition there is Kriss’ fabulous wife, Melanie, who was also in the entertainment world.  It is she who has persevered with getting the word out about The Siam (and she had two children during the hotel’s six-year gestation).

Actually there are two more names to be mentioned.  Donald Wong, a long time Aman personality, is now the marketing genius here, and one of his plums, alongside everything listed above, is Connie’s Cottage.

One of the four heritage Thai houses that have been incorporated into this very-modern hotel – see some of them, reflected in a 2012 glass wall – belonged to Connie Mangskau, a one-time secret agent and a good friend of Jim Thompson.  As of September 1st, you can stay in her house, which now has a really big private pool.