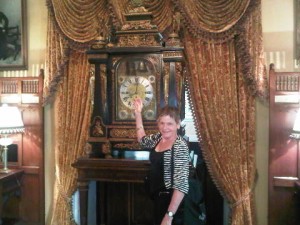 One of Falaknuma Palace's antique clocks, in exact working order

Taj Hotels, Resorts & Palaces spent ten years – and goodness only knows how much money – restoring Hyderabad’s Falaknuma Palace after they leased it in 2000. They found lots of artefacts hidden away in the sprawling buildings.

One amazingly beautiful clock was miraculously put back in full working order by a local craftsman.  It stands, now, in the Nizam’s one-time West Office, now the reception room.  The Nizam was a connoisseur, and a great reader.

His collection of over 5,900 books is displayed, behind floor to ceiling glass doors, in the Library, which also has a turning table holding all 29 volumes of the 11th edition of Encyclopedia Britannica, published 1910-11.

His full-size green-covered billiard table has, set by it, his initialled cue.  Nearby is a multi-tube hookah.  Down in the main lobby is an automatic turn-cylinder orchestrone, awaiting repair by a Dutch craftsman.

Hyderabad is famed for the world's best biryanis

Hyderabad boasts the best biryaniin the world.  Here, overnight-marinated baby lamb bits are cooked together with basmati rice (in Lucknow, another biryani centre, meat and rice are cooked separately, and then blended).

Biryani is a royal food, and it is served with a choice of yoghurts including garlic flavours. We dined on a back terrace, lit by local translucent lights, with nightlights inside (I have a pair at home, by Shanghai Tang).

Falaknuma offers eat-where-you-will, outside or inside, in Adaa (‘style’), which is Indian fusion, and Celeste, which is international with an Italian flair.  All meals are served on exquisite embroidered linens.

Breakfast on an upper terrace, looking at Hyderabad below

Hurry if you want to breakfast, as the gal did, outside on the main front terrace – when the temperatures begin to rise, around mid-March, breakfast moves inside.

As it was, I was able to sit looking across well-manicured lawns of the palace’s upper terrace, and, far down in the main city below, such famous tourist sites as its Charminar, and Mecca Masjid.  The juice was, of course, fresh, and the plunger coffee had lots of flavour.

Anywhere in India, a ‘must’ in any luxury hotel is a platter of papaya and delicious baked yoghurt.  Here, I was brought a basket of croissants, multigrain toasts in a linen-lined silver dish, a three-tiered tea stand holding cold cuts and a three-level wood trolley held even more copious supplies.  There were more French preserves.

In the past, the Nizams, their families and guests would have eaten in the main dining room.  Around the upper walls of this sausage-shaped room are 36 murals showing various culinary scenes; overhead hang five giant chandeliers.

The room encompasses the world’s longest dining table, all 108 feet from one to the other, and formed from seven pieces of oak. It is set ready to seat 101 diners, and acoustics are such that you can hear from one end to the other.

Several big sell-out dinners have been held in the last few months, and one resourceful gentleman paid 50,000 rupees to have dinner merely for two, so that he could propose – successfully, fortunately – to his dearly beloved.

Where the Nizams’ servants ate has now, interestingly, been turned into a conference room.  Somewhat to the surprise of all concerned, Falaknuma has become a significant venue for small meetings.

There is plenty of business locally: Hyderabad Microsoft is big, as is all IT – a growing area of the city is HITEC (Hyderabad Information Technology Engineering Consultancy City), which sprawls over some 150 acres.

Technology today meets here, at the luxury hotel that is Falaknuma Palace, which also, fascinatingly, still shows off the world’s first-ever telephone exchange. Hydrabad also has its own local Bollywood, called Tollywood after Teluga, the local Andhra Pradesh language.

One and a half million visitors a year spend $25 for a VIP Star Experience tour of Ramoji Film City, called RFC for short.  It spreads over 1,666 acres, has 47 sound stages and dwarfs University Studios many times over – and its canny Chairman, the septuagenarian Ramoji Rao, also owns the biggest Andra Pradesh newspaper so it is assured of constant publicity.

The typical guest at Falaknuma needs not only one whole day for town but also another whole day merely for the hotel.  Look at the former royal apartments, where the Nizams slept.  The beds are tiny, double-bed width but midget-length.  Bathrooms have proper flushing toilets, and one of the freestanding tubs has a Victorian ‘torture cage’ over it which dispensed, as a shower, hot water, and/or cold water, and/or perfume.

A ladies’ sitting room has a memorable four-sided (facing out) quilted round sofa, plus four straight, double sofas with – such a good idea, high racks behind the sofa backs to hold your handbag and other necessities.

There are nightly hotel tours with the Falaknuma historian.  He shows how the billiard room’s walls, which were once beaten leather, have been restored with beaten metal.  You gaze upwards at some of the 46 chandeliers, from Belgium or Venice, that are set throughout the entire hotel.

You look up at painted ceilings, and you look horizontally at some magnificent trompe l’oeil walls.  Last night, the assembled group of hotel guests were about half Indian, the rest from Australia, Germany and UK, plus, from the USA, the Editor-in-Chief of Travel+Leisure, here on vacation.

I am about, oh so sadly, to leave.  In Reception – the one that was once the Nawabs’ West office, I am asked to write in the guest book.  This is an elaborate heavily-bound affair.

I am offered a pen, a real-ink pen, with a tail formed from a peacock’s feather, complete with eye.  It is a long time since I have used real ink, and certainly even longer since I have tried to write with a quill pen, and my message is so appallingly illegible it looks like calligraphy.

Behind me is a portrait of the 6th Nizam of Hyderabad, with an unnamed British military official.  I wonder how many members of the royal families of Europe signed just such a book over a hundred years ago.

As I leave – by buggy, incidentally – I look down to a couple just arriving – by carriage, of course.  I think of all the YPOs (Young Presidents’ Organization members) who will be meeting in Hyderabad this November.

Before leaving, I look down at another arrival, by the same open-topped horse-drawn landau that brought me, yesterday

I think of the wedding, one of many, that takes place this coming weekend.  Marry here and you have to buy the whole thing, all 60 rooms (sorry, suites). Typically, the happy party arrives Friday, Saturday is for beautifying the bride and the ceremony, with white elephant, is Sunday.

The bride’s family pays for most of it, and it is a day of their lives for both sets of parents.  This is not the first time I have been told that the couple themselves are almost superfluous… oh, and the latest benchmark, by the way, is one Mother Of The Bride who sent all the invitations out in Chanel handbags.  Real, of course.