Berlin, stunning city. What is its centre, the Brandenberg Gate, or the statue of Victory?  I love this golden statue, in the middle of Tiergarten.  Rising nearly 200 ft above ground, it was designed by Heinrich Strack in 1864 to commemorate the Prussian victory in the Danish-Prussian War.

The statue itself, all of 25 feet high, was sculpted by Friedrich Drake.  You can climb up to it, going up 285 steep spiral steps.  No, the gal did not do that, she was far too busy.

She is in Berlin for many reasons, always this time of year.  First comes the annual International Hotel Investment Forum – IHIF for short.  Think of 1,700 people involved in money, wanting it, having it to loan or merely talking about it. About 1,500 of these are men, in dark suits, grey, navy or black.

Colour comes in striped socks, for some, and pale shirts for others, and one particularly gaudy bow tie, on my pal Russell.  Of the guys, 1,498 were sensibly and suitably groomed, wearing ties.  Even my pal Robert, having changed companies to ceo another, called De Vere Village Urban Resorts, now wears a tie.  He means business.

Actually there was one panel discussion which looked pure theatre, and no ties allowed.  Take a hotelier, André Balazs, and put him in a beautifully-cut grey suit with pale blue shirt.  Take a designer, John Hitchcox of Yoo (which he does with Philippe Starck and Jade Jagger), and put him in tight black trousers, a rather voluminous black shirt and curl his black hair somewhat.

Take a self-styled pundit, Tyler Brûlé of the Financial Times Fast Lane column, Monocle magazine and goodness knows what else.  He thinks it is cold.  He wears layers.  I can see an undershirt, a sweater, a military style jacket.  I am sure he has a scarf.  He has a beard, thick-rimmed glasses and, true to form, he never smiles once.  For such a panel, the moderator, Nick van Marken, head of Deloitte’s hotel scene, takes off his tie, and he has the brightest striped socks of the lot.

Brûlé rubbishes one hotel brand – getting too big.  He rubbishes a Hawaiian icon, a luxury hotel by any standard – it has 70 percent Japanese guests and yet gives American service.  He praises a little-known Zurich hotel, the Rossli, for its real-wood floorboards (so what?) and its windows that open.  He rubbishes social media hotel ratings but sensibly urges hoteliers to get out there on the floor, whether wood or not, and interact with guests.

One other panel was only half-ties.  This was when Expedia and Google and Groupon got their own back, pointing out how Groupon has 17 million followers in France alone.  The moderator, a professor at ESSEC outside Paris, had his hair combed armadillo style. 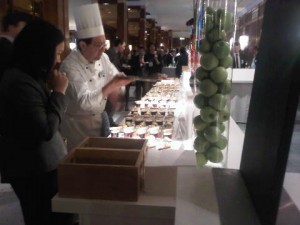 The Intercon cleverly turned its main ballroom to buffet lunch venue - for 1,700 - in under two hours, and had live cooking stations

Groupon’s hair was sculpted as a Vidal Sassoon special – interestingly, this guy, Ait Voncke, has a Belgian engineering degree, and English science degree, an American MBA, worked for Accenture and now, well really, he is selling cheapo hamburgers and discounts to luxury hotel rooms.  What would one’s grandmother have said.

Frankly when you sit for hours listening to people pontificating you notice the details, and meals stand out too. I had excellent and luxury breakfasts both days of IHIF.

Mövenpick’s was sensational for its separate buffet room, with fabulous carve-yourself breads and a GM who carried the just-squeezed juice.  The eighth floor club lounge of InterContinental Berlin has a discreet and well thought out buffet, and its mango yoghurt is sensational. 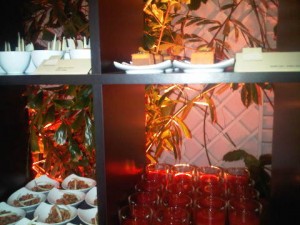 Dinner desserts - a back-lit display at the Adlon Kempinski

The InterCon hosted the conference, and as always did a magnificent job (this is a hotel with a long history, and I remember Eastering here once, us and a Jordanian family and a cage of real bunnies in the lobby).

One lunchtime they set up copious buffets of already plated dishes, with chefs making and cooking and serving pastas right there in the hall.

The final dinner, when the conference was all over, was the Evening of Pure Gold party hosted by the Global Alliance of the hotel industry,  at the Adlon Kempinski, the Leading luxury hotel that is my home for this week, year after year.  800 were expected, over 1,000 turned up.

Some of the youngest musicians in the business (well who CARES about biological age?)

The atmosphere was totally electrifying

The gal passed him in the lobby of the Adlon, which is where all top people in Berlin stay of course.  Off-stage, that guy is unrecognisable. Glasses, head down, checked shirt.. could not see if he, too, had striped socks.