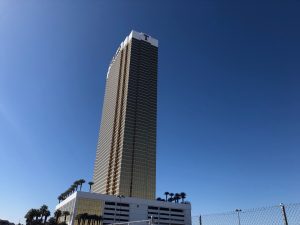 The gal had not stayed at Trump Las Vegas, and, to be honest, it is easily understood why this is a hotel that would never grace the inside pages, let alone the cover, of a design magazine,  Outside, it is a glorious golden mirrored wonder that soars up 64 floors. Inside, only one colour appears to have been used throughout the 1,232-key property, and that hue is, well, cream-meets-sludge.  But who cares about looks when the personality is there?  And this IS personality, non-stop. 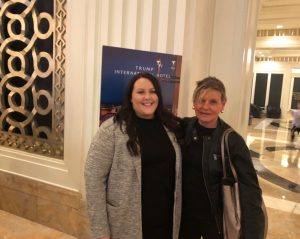 Of course it was not the norm that the President decided to stay there while I was inhouse.  He came with 600 close aides, police and Secret Service and a myriad of other uniforms.  There were lots of dogs. There was not much traffic: the whole of Fashion Show Drive was closed, which meant Uber- or any other kind of motorised travel required a ten minute walk along to The Strip.  But it was all very good natured, and the hotel coped absolutely marvellously.  My particular hero, in a hotel that is currently rudderless, awaiting a GM, was Makenna Simmons, who seemed to be there until late at night and again by 6 a.m. fully made up and ready to smile, genuinely, for about another 16 hours. 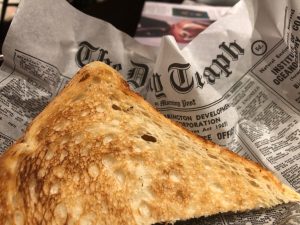 This is a hotel that works. My lovely Indian room maid was ready to come in, and do what I wanted, at five minutes’ notice. All rooms have full kitchens but local laws do not allow them to be stocked.  No problem. A set, for two, of china and cutlery arrived in, again, five minutes – the same time it took for an electrician to change a light bulb. Rooms also have proper fridges (GOSH I hate automatic minibars), and there are more than enough water bottles.  Also, unlike some Las Vegas establishments, the gym, which is 24/7, is free – as is the outdoor pool, though they charge substantially for loungers and cabanas. 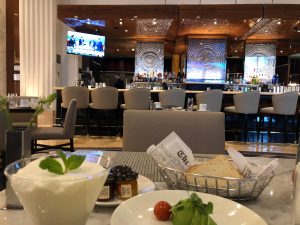 I was only there for breakfasts (the prelude to which was my New York Times being placed neatly outside my door by 6 a.m).  One day we ‘normal guests’ were confined to a rear, window-less room as the main room was taken over for a Make America Great Again rally – the next day, I sat in the main restaurant, which is a most agreeable sports bar-cum-eating place.  Both days, I loved the way my sourdough toast came wrapped in a faux copy of the so-English Daily Telegraph, issue 14 April 1969.  It was hilarious to read that apart from one advertisement for a Chief Development Officer for Warrington Development Corporation, all other entries were looking for secretaries. 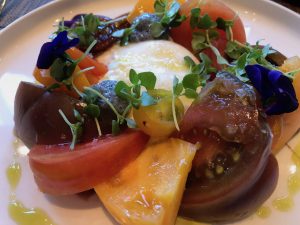 My other enjoyable eating experience in the Land of Vegas was at Zen in Waldorf Astoria.  WOW, showing that even simplest dishes can be made outstanding, see the deconstructed Caesar salad, above – hidden under the halves of hard-boiled eggs are tiniest whole anchovies.  As well as looking good, it tasted magnificent.  I had started with burrata, the joint top-ingredient at the moment, the other being avocado, and again it was, surrounded by perfectly ripe different-coloured heirloom tomatoes, absolutely superb.  I cannot wait to return to this luxury hotel for more such ‘everyday food’, the kind of healthy stuff that people actually want to eat these days.