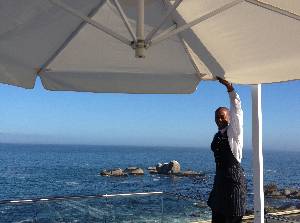 Putting up an umbrella for breakfast shade

The global gourmet is continually asked what is the best this, what is the best that. In years past it was easy to say the best mashed potatoes were Joël Robuchon’s, but time has moved on. Few today want mash that is 50 percent butter.  And the more one knows, the less likely one is to say anything is THE best.

But the gal will stick her neck out, and say that for one of the ten best breakfasts in the world, head for the terrace of The Twelve Apostles Hotel and Spa, a luxury hotel 20 miles from Cape Town, sandwiched between the Twelve Apostles mountains and the rugged and otherwise-empty coast five minutes’ drive from Camps Bay.  Out there, you feel as if you are a luxury cruise ship (say Silversea, sailing to paradise). 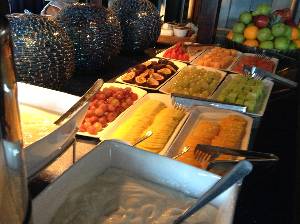 Yoghurts, with breakfast fruits behind...

Breakfast, from seven onwards.  Go through the azure and white main Azure restaurant and out to the squash court-sized terrace.  Sit under taupe-coloured big umbrellas, looking down at the blue sea beyond.

When you are ready, go to the buffet, or ask a waiter (in full black and white formal bistro gear) to bring what you want.  This is not, by the way, a buffet for stuffers, those who want to consume as many unhealthy calories as possible.  No, this is breakfast for today’s healthy lifestyle.  Let us start with juices.

There is fresh orange juice by the gallon, and cranberry and peach juices, and beetroot juice. I have not had such good beetroot juice since Grand Hotel Europe in St Petersburg, sitting at the table next to the local oligarch who always starts his day there with beetroot juice, and seven cross-cuts of watermelon… 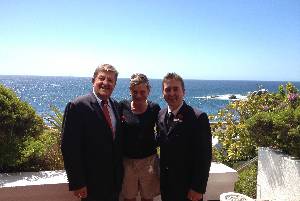 Here, I pair my beetroot juice with dollops of the best Bulgarian yoghurt outside of Sofia.  Every dish here, by the way, is exactly, and correctly, named (ever been amused by how waiters have mixed up the labels for scrambled eggs and waffles?  Not here, where minutiae is the hotel’s second name).

Cereals and muesli? There are bowls of the real stuff, with no fewer than 18 small dishes of different nuts and seeds to add.  You an also scoop on passionfruit seeds, or a berry compote.  Want cold cuts?  I did not know there were so many types of salami and salmon.  And now for the breads. 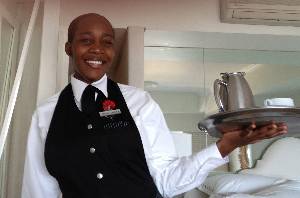 Well, Bodyism, eat your heart out.  A couple of slices of the Cape Seed bread, toasted and eaten with one of the hand-rolled butter pats, and local jam, and you could run any marathon in under four hours – though not immediately.

One of the waiters – all seem to be hired for smiles – asked if I would like a specially-cooked Twelve Apostles ‘full English’, or waffles or whatever.  There were oysters, with local sparkling wine.

Finally, the coffee.  It is Caturra, from a local company, and so good that I ask Dominique is I could have another cup brought to my room – it arrives in five minutes. Caturra’s co-owner Klaus Becker says he also supplies Taj Cape Town, and the Westcliff, in Johannesburg. 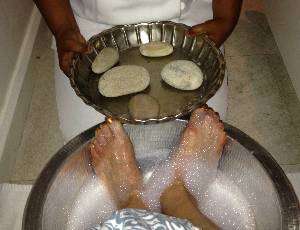 At the spa, you are asked which stone you want in the feet-washing water (I chose 'energy')

What more could one want?  Ah, here you need to book far ahead for a session in the troglodyte spa, carved deep into the diagonal hillside that holds the Twelve Apostles – note it is, intentionally, called hotel ‘and spa’.

Its many awards include Travel + Leisure’s best spa in Africa and the Middle East 2012.  It is all white, with interesting shapes of passageways, and from one area go down 14 glass steps to two rock set plunge pools, one rather cold and one rather warm, and a sea-water flotation pool that apparently takes away jetlag.

They use Elemis and the hotel’s own all-natural local B Africa products, devised by one of luxury travel’s most creative minds, Bea Tollman.  Before she started on my face, Alicia asked me what kind of music I wanted (classical, natch), and she washed my face. 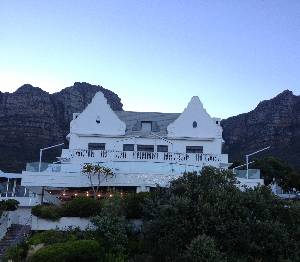 Looking back up at the hotel, with some of the Twelve Apostles behind

This 70-room hotel, a member of Leading, has, like Topsy, grown… from a 1929 house built by Jack van Breda in the style of Sir Herbert Baker – he who laid out much of Cape Town and, with Lutyens, what is now New Delhi – through to now.  It was bought by Bea Tollman’s family company, Red Carnation, in 2002.  You know who runs this lovely place.

Everyone working here wears a red carnation, and a big smile.  OK that sounds corny but it is true.  Just as in the safari lodges I visited in Botswana, Twelve Apostles – under its lovely, born-to-be-hospitable boss Horst Frehse – hires for smiles…   He probably has the biggest smile of them all.  His hotel has won so many awards he needs an award for the number of awards (plus that breakfast award, of course). 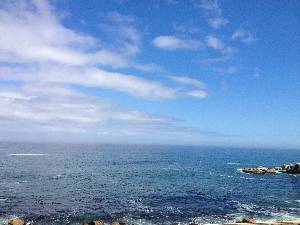 Looking the other way, the view from room 310

My favourite rooms are any with a sea view.  Look out, at that blue water.  You think you see lots of birds bobbing around but in fact they are balls of sea bamboo Ecklonia maxima, a brown algae that is attached to rocks, and harvested as Agar Agar, used for gelatine or fertiliser.

You learn a lot about the locale staying here.  The décor of the hotel, done by Bea Tollman, not only has displays of modern African art but photos of old times, and prints of species of protea and the like.

Head for the Leopard Bar, choc-a-bloc every evening inside and out with locals from Camps Bay, and the art, and carpet, immerses you in leopards-ville. Sit up at one of the eight bar seats and experience the feeling of a ‘real’ bar.  You know it has history. 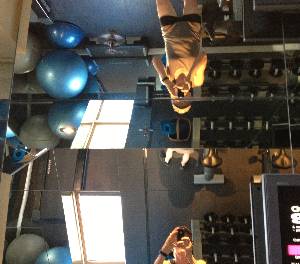 Amazing 'contortions' in the mirrored gym

The gym, an eyrie atop the whole caboosh of the hotel, is unique.  It has views, far out to sea, but also, lined as it is in mirrors, contorts your shape as you work out.  Wish it contorted one to size zero…..

But there are lots of photographic opportunities here, say the striped corridor carpeting with sharp-angled white railings from one level to another, say the 67 steps from reception up to the top floor providing an art gallery on the walls as you go.  Or the food.  Oh gosh, girl, no space for the chef’s superb dinner… that will have to wait.