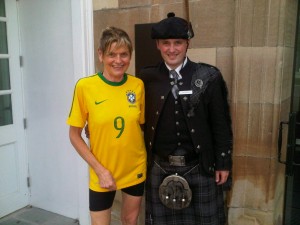 More on what girls-by-themselves can get up to, say for hen parties, or mums-and-daughters or what. I think even with a single (for which read one) girlfriend I could have a great time at Turnberry, on the wild coast of south-west Scotland. Wow, one week ago I was in the sunny winter of Rio, at Copacabana Palace, and here I am, one week later, in the non-sunny summer of Scotland

Any time of year, coming here,I would hope to have won the lottery to helicopter in from Glasgow airport. As it happened we drove, seven hours north from Banbury. Our GPS satnav, Gertie, served us beautifully until I mistook a road that deteriorated into a half-track potholed path over scrub-full highlands with thousands of roaming sheep and cows. At one point we were surrounded by a bovine family, complete with strong-looking daddy bull.

Eventually we reached the 375-ha Turnberry estate. The main hotel is a three-floor, sprawling white palace with red-tiled roof which sits proudly a hundred feet up a grassy slope from a quiet road separating it from the wild Firth of Clyde waters by Ailsa, one of Turnberry’s three championship golf courses.

A doorman in grey-plaid tartan kilt and beret with a tall pheasant feather sticking up said hello (first photo). I felt as if I was entering a private mansion, not part of what is, in total, a 240-room Luxury Collection resort. Designer Mary Fox Linton (think London’s One Aldwych and west-of-London Cowarth Park and The Grove) has done a brilliant job in updating heavy-oak and plasterwork interiors of what opened back in 1906 as The Station Hotel.

Room 222, up 57 carpeted stairs (or via the elevator) to the top floor looked out over the sea to the 1,199-foot Ailsa Craig rock (like a giant dinner cloche), 11 miles out. My new home was divinely modern, with a twist. Shades of grey were complemented by parquet floors and an Art Deco carpet with soft heather-coloured corners and, bliss, one of the world’s best-ever beds with bedhead-hung fibre optic reading lights. I had Twining’s teas with oatmeal cookies, and a Frette robe. The bathroom had a free-standing oval bathtub and heated electric towel rail. The Water l’Eau toiletries, from Antwerp, said they contained green tea but felt more like seaweed.

Golfing girls have 2.5 courses, here, the signature 18-hole par-70 Ailsa, the par-72 Kintyre and the nine-hole par-31-Arran. Spa girls have an ESPA heaven, and for the energetic the Technogym, like the indoor pool, is open from 0630 (best time to go, before the pool is clogged up with other people’s kids). I also had my folding bike so had a great and highly-aerobic workout on the steep road behind. 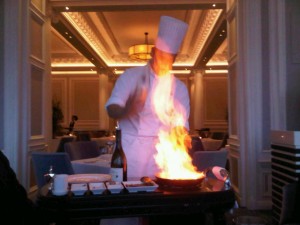 And this place is bliss for the culinary inclined. Dinner was most memorable for the flambé cooked at table by Dimitar Angelkovski, a charming young Swede who is current winner of England’s Academy of Culinary Arts’ rising young chef award (left). For that, he had to cook, by himself in four hours, razor clams, a venison wellington and a new-look lemon meringue pie, which he put on a base of Scottish shortbread.

We were dining with Turnberry’s new GM, the super-suave Catalan-German Jordi Tarrida who has the panache to wear his bright turquoise glasses as a necklace, which he magnetically clipped together when he actually needed to see something, say the wine list (below). 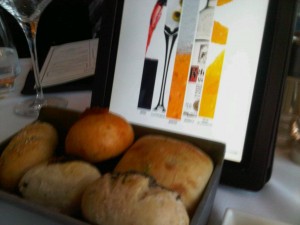 This is a challenging modern SmartCellar electronic notebook: touch it to get into red, white and whatever, then into new or old world, then country, then type and so on. My take is that a girl would end up buying a much more expensive bottle as she would not want her mates to see she really wanted to choose the cheapest (last photo). We asked, in his honour, for Spanish, and Jordi chose a Ribero del Duero Tempranillo 2008, which was beautifully decanted.

The new-look main restaurant, 1906 for obvious reasons, is breathtaking. It must seat about 150, at tables covered with immaculate and highly-starched white linens (more are used as floor-length aprons under servers’ black jackets. The whole restaurant area, rectangular with a gigantic protruding semi-circular bulge along the wall looking down to the sea, has white-fluted interior columns and heavily-moulded plaster ceiling areas, all so cunningly, and theatrically, lit. Colour comes only from golfing-types dining in bright-coloured Pringle sweaters, and turquoise panels above some windows (and from Dimitar Angelkovski’s continual bursts of orange flambé flames). 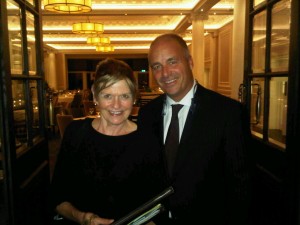 To be honest, my culinary highlight was breakfast – and why not? For so many healthy girls it is, indeed, the most important meal of the day. Here the juice is fresh, and the fresh-brewed coffee comes in individual shiny-stainless plungers. I was brought toasts in a traditional silver toast-rack, but the buffet’s breads were outstanding, especially carve-yourself brown loaves with integral nuts. I had started with unsweet prunes and Greek-type yoghurt (yummy), and a banana off the fresh fruit bowl.

My pal loved the muesli, and smoked salmon and cream cheese, and Jumeirah’s marketing genius Thatcher Brown, at the next table with seven golfing buddies, joined them in one of the many à la carte hot dishes. Back to the buffet. There was a bottle of Mumm, ingredients for make-your-own Belvedere Bloody Mary and, next to the urn of hot porridge, a bottle of Bailie Nicol Jarvie whisky.

When in Rome… but when in Scotland, do as the Scots. They ate their porridge out of wooden porringers, and added salt rather than sugar, and downed it with a wee dram of whisky. Bailie Nicol Jarvie, incidentally, is part of the Glenmorangie stable and is one of The Independent’s best Scotch whiskies, 2011. It is named for a magistrate in Sir Walter Scott’s Rob Roy overcame a sword-wielding miscreant by setting his kilt on fire. And at that point, sadly, it was time for me to leave.