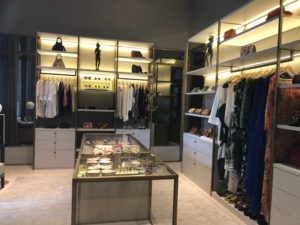 The gal was totally amazed by the unforgettable Palácio Tangará hotel, a lush oasis in the concrete jungle that is São Paulo – see, above, Alain Bouldouyir’s painting of the property.  Suddenly, the Mercedes turns off into a 200-metre steep-slope driveway taking arrivals down, through tropical undergrowth, to what looks like a five floor palace. Sometime in the mid-20th century Brazilian-Italian ‘Baby’ Pignatari bought this land, to create an urban idyll to lure his beloved, Princess Ira von Fürstenburg, then married to Marbella Club founder Prince Alfonso of Hohenlohe-Langenburg.  He planned an Oscar Niemeyer house, which never happened, with landscaping by the architect of Rio’s Copacabana and Ipanema Beach layouts, Roberto Burle Marx. Princess Ira did marry her Baby, in Reno in 1961 – she left him 1964, and now lives in Rome. 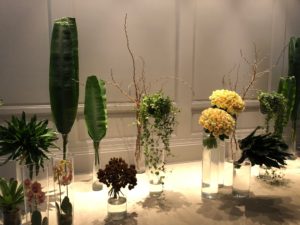 Flowers seem to grow from the lobby floor

Move forward to May 2017 when today’s palace, named for brightly coloured song-birds found here and in Argentina, was opened by its current owners, GTIS real estate investment. They already had 52 hotels in Brazil and, unknown to most guests of the 150-room hotel, the conference facilities here are another cash cow.  I spoke to one local journalist and he, like may hotel customers, had no idea that underneath ‘the hotel’ are two more floors of fabulously stylish ballrooms and meeting rooms, all, thanks to the slope of the land, opening on to terraces overlooking the hotel’s tropicana, called after landscape architect Roberto Burle Marx, whose other works include laying out Copacabana and Ipanema beaches in Rio. 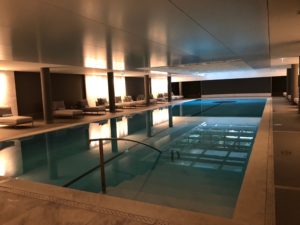 Today’s hotel guests enter a lush lobby, going past an enticing Eden Living boutique on the way. The lobby’s floors are done by Housekeeping staff, and they are sensational, as are overhead mobiles. The lobby, like all public areas, is designed by Patricia Anastassiadis, who has brought in lots of fascinating, and different chairs. Downstairs is a 25-metre indoor pool, with ceiling windows to let in maximum light: the gym has one wall covered with a gigantic sepia blow-up of woodland, again a sign of an oasis in this city.  The spa is completely Sisley, the only such facility in town.  Palácio Tangará, indeed, has lots of unique features – who else has a second pool, also 25 metres, outside in the garden area that is framed, as it were, by the arms of the C-shaped building. 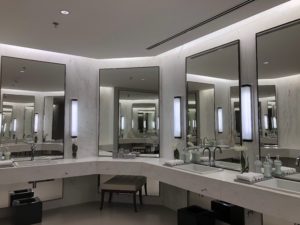 And now the bedrooms, all decorated by Simonato Bick (William Simonato and Luis Bick).  They seem to have used soothing shades of mole throughout, and that includes carpets and walls on bedroom-floor corridors.  I just adored suite 417, right in the centre of the upper floor. Two pairs of French windows opened, for fresh air, and had the weather been more agreeable I would have breakfasted out on the balcony, looking down to that outdoor pool – one of the videos below gives a tour of the suite.  There were so many style pointers. Would I like a New York Times? A satellite copy arrived, in a covetable black leather bag.  I loved the notecards and postcards, showing the watercolour above, and the stationery folder also included envelopes with turquoise printed with outline images of tangará birds. And so on … and now, tomorrow, it is time for FOOD. SEE VIDEOS OF THE MEETINGS-BALLROOM AREA, AND THE HOTEL LOBBY, AND SUITE 417