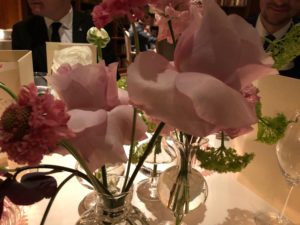 Hotel Adlon Kempinski, Berlin, excelled during the city’s recent travel extravaganza, which started with the International Hotel Investment Forum, IHIF, when 2,300 investors, developers, operators and others descended on the German capital. This was followed by ITB, when it seemed as if a million agents, destination managers and tech entrepreneurs had flocked to the frustrating maze of the show. During the myriad of parties, some at ITB and some miles away, one luxury hotel stood out, as it has, says the gal, on so many previous occasions. What Kempinski’s creative sales and marketing supremo Amanda Elder and so many colleagues produced that evening showed that you can be old – sorry, established, since 1897 in the case of Kempinski, the company, and 1907 when it comes to Kempinski, this hotel, built because Kaiser Wilhelm II asked a Mainz businessman, Lorenz Adlon, to build a grand hotel. 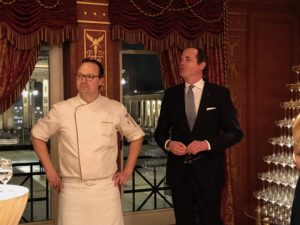 But established can also be bang up to date when it comes to refreshing luxury, and Markus Semer, CEO of Kempinski, hosted the ultimate understated, elegant dinner imaginable. The invitations said the event was 7.30 until 10.30, and all invitees turned up, and on time (the evening did over-run by a few minutes but only because it was so superb). Pre-meal baked Gillardeau oysters went with Moët poured from magnums (jereboams propped up a pyramid of filled coupes), while Kempinski’s adopted violinist, Rachel Buquet, played divinely. Markus Semer welcomed everyone, with no hard sell. Chef Hendrik Otto, who has two Michelin stars for Restaurant Lorenz Adlon, explained his passion of awaking emotions – and then he rushed off to coordinate his ten-strong brigade while we were led, by a young man in a grey button-up cardigan, part of the uniform, to two adjacent, and opened-up, salons, both with plush carpets, book-lined walls and ceiling frescoes. 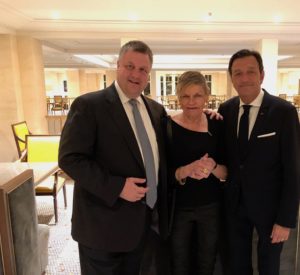 Shared between the two rooms, a total of five circular tables were immaculately set, eight diners each, with standing menus, champagne-coloured napkins standing as cones. Flowers were exquisite, and within a few minutes there were more wows as the breads arrived. Yes, the image at the top of the story is a bread bowl, or rather hot stones and pebbles holding a selection of bread types. And then the meal started. Whereas Lorenz Adlon generally sells two menus, the six-course HO-QI and eight-course HO-QII, tonight we were treated to five courses, each paired with a Champagne, carefully explained by Sommelier Hans-Martin Konrad. Hold your gastronomic seat-belts, my friends, and prepare for the roll-call. First came beef tartare with Attilus caviar (farmed and hand-prepared in Saxony-Anhalt from sturgeon of Russian and Siberian stock) and vodka lime cream, paired with R de Ruinart, Maison Ruinart. 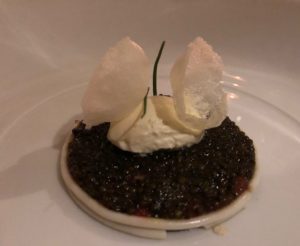 This was followed by bowls holding langoustine over which Md’ Oliver Kraft’s team skilfully poured an essence of Pernod with celery and fennel – this was paired with Rosé Brut Veuve Clicquot. Next came lengths of sole with lengths of asparagus, a fretwork of coffee and lobster sauce over (want to know what to drink with this? Try Rosé Vintage Brut Veuve Clicquot). Fourth in sequence was a mélange of veal cheek braised in Barolo, with a modicum of Périgord truffle sauce and, apparently, snail butter, but not having a PhD in that particular delicacy I cannot confess I recognized it. This did all go, magnificently, with Ruinart Rosé Brut. Last creation was a fortunately-bijou portion of frozen beetroot and currant mousse, with salted lime caramel, quince and apple and two cherry-sized white chocolate balls – and Nectar Imperial Moët & Chandon. And then, even though it was still short of midnight, it was time to do a Cinderella, leave this refreshingly different luxury hotel and return to the real world.