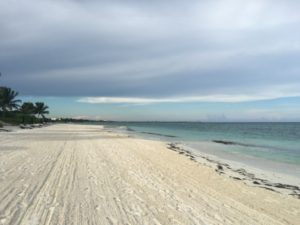 The last thing that Daniel Scott, GM of one of Mexico’s top luxury hotels, Rosewood Mayakoba said in an email before he had to rush out of town for an urgent meeting was ‘look at our beach’. Eh? The gal always thought that a beach was a beach was a beach. Well, it turns out that the hotel has spent $8 million – yes, that is right, EIGHT million – in putting in a reef and lots of sand. Now the beach looks absolutely divine, like pale honey silk, although walking on it is more akin to walking on soft meringue, with a scrunch every time a foot goes through the surface. Talking of meringues, by the way, it was a Friday night, which was dessert-tasting at the hotel’s gorgeous Casa del Lago bar. 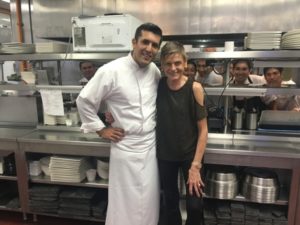 Juan Pablo Laza, with a brigade chorus behind

The hotel’s Pastry Chef, Fidel Baeza, is a genius. Working behind the bar counter he perfected, in lightning time, four different desserts, a tre leche in a martini glass, an icecream-filled meringue ball which he burned with a kitchen blow torch, an individual apple crumble and the finale, a strawberry jelly-wrapped chocolate golf ball. All the time he was creating he was bantering verbally with the hotel’s Executive Chef, Juan Pablo Laza – the two are boyhood friends from Mexico City days. Since Daniel Scott was away I was actually dining with Pablo, which was so inspirational. He motivates his 60-strong team by coming up with a basic concept and then encouraging them to work the creation out, as a team. Casa del Lago’s main menu is Italian, with a Mexican touch, say hints of chilli in the local arugula and tomato topping for my absolutely outstanding Veal milanese. 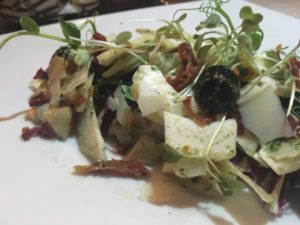 Juan Pablo Laza has lots of other ideas but I promised to keep’em quiet, though I do confess I am not sure about the slow-cooked marinated turkey he is serving to lots of ILTM dignitaries in the next few days (but then this is the culinarian who a few years ago served me grasshoppers). I ate marvellously, throughout, from a superb room service salad on arrival – on the terrace of beach villa 614, looking down past my sizeable plunge pool and seven wood steps (of course with a hose, for rinsing sandy feet) to that beach. And the breakfast buffet is out of this world, on a par with the best anywhere, globally: this is, by the way, currently Tripadvisor’s #1 hotel in Mexico, and #13 in the whole world. 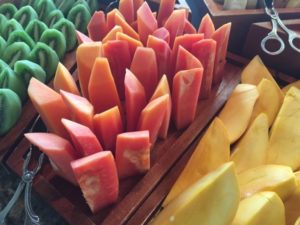 .. an a Xi’an line up of vertical breakfast fruit

What else is superb? I could go on forever. Immaculate gardens, including a big working herb garden, and a maze of flowering shrubs, the whole estate dotted with stunning modern sculptures. The Technogym is 24/7, and comes with nuts and snacks and make-your-own-espresso. The fitness classes range from yogas to TRX. My bicycle was a stylish shiny avocado BOSS city bike. With 420 staff for 128 rooms, some seem recently to have been added to man the covered ‘bus stops’ along the main meandering thoroughfare, which means that there is always someone to talk to if needed. Oh and I have not even mentioned the winding inland canals, and the arrival that is one of the top memories of this luxury hotel (SEE THE VIDEO BELOW). When I arrived I was offered an absolutely sugar-free green welcome drink and would I like to be transported by buggy or by boat? Obviously my choice was boat, and you can see below how we silently slid along the waterway, mangroves either side and lots of birds en route.