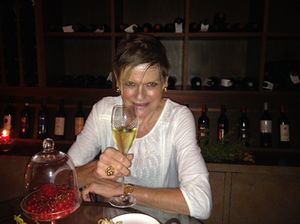 César Ritz was a busy old man – of course earlier in his life he was a busy young man. He was a mere 44 in 1894, when he hosted a thousand-strong party to open the Grand Hotel Rome, a luxury hotel a hop skip and jump from the city’s main rail station, Termini. Today Mr Ritz would approve, the gal suspects, of the hotel’s surprising wine cellar, made out of a tepidarium, warm room, in the remains of Roman baths from the time of Diocletian that extend beneath what is now the 161-room St Regis Rome (the space was rediscovered during extensive renovations to the hotel in 1999-2000). The sommelier opened a bottle of Ca Del Bosco 2008, one of Italy’s absolutely outstanding sparklings. The flutes, specially designed to show hotel design shapes, are by Luigi Bormioli, in Parma. The deep-fried mozzarella canapés are, well, from heaven. 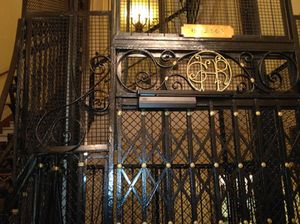 Climb down a spiral cast-iron staircase to the cellar, magnificently stocked and an ideal venue for a small party, or even a wine-tasting for one, or two – but ask Hotel Manager Vincenzo Falcone to arrange it a long time ahead. There is so much fascinating history in this hotel, a square block, five floors high, with its main entrance now on Via Vittorio Emanuele Orlando, named for the prime minister during WWI. A ten-foot wide corridor, with rooms leading off both left and right, runs around the block. One of the original staircases wraps around an ancient open-sided elevator, Number 13 in Italy’s elevator register, so obviously incredibly old (it is probably original, 1894). 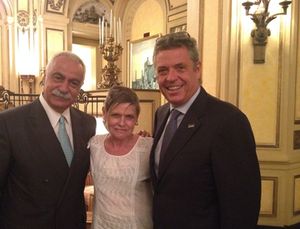 St Regis Rome is a venue for diplomats and statesmen, including those who need to get in and out of the hotel without being seen (and no, I am not going to tell how this is done). The unofficial ambassador of Rome when it comes to hospitality is Marcel Levy, who enters in the normal way, and of course he knows everyone from his time running The Eden (1997 to 2013, to be exact). Since The Eden was then part of Starwood, Marcel Levy obviously knows all the Starwood people here at St Regis Rome, and he greets the city-wide boss, Marc Lannoy, as an old friend. Three days after he arrived here from his last job in Madrid, Marc Lannoy delivered his arrival speech to his 350 employees – in Italian. Question, how is it that Belgians are so good at languages? 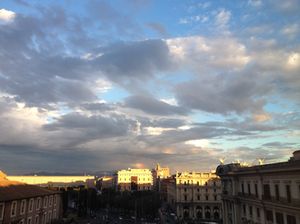 Just a hint of a vertical rainbow…

I recommend corner suite 431 at this luxury hotel. Why? It is ten yards from the staircase-round-the-elevator, and one floor up is the gym. For more exercise, simply walk or run the entire staircase, bottom to top, 162 gold-rod, carpeted steps each way. Look out from 431, across Piazza della Repubblica to Stazione Termini and you might, like me, be lucky enough to see a rainbow over the station. Having tried Martelli spaghetti from the Pisa region, and Sardinian bottarga from Cabras at dinner last night, it was breakfast on the lobby terrace, immediately above the wine cellar, with one of the world’s best croissants to go with Italian apricot jam. Somehow, it seems that EVERY morsel in the Italian food repertoire is just delicious.