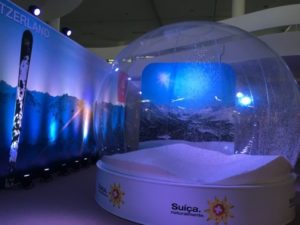 Switzerland had a snow bubble for selfies

There was business galore, and worthwhile business of course, says the gal, at the annual Travelweek São Paulo by ILTM which took place May 3-6, 2016. Apart from the one-to-one meetings, in exhibitors’ divinely-decorated semi-private discussion rooms (see the video below), there were events, many of them hosted for the media. Small Luxury Hotels, for instance, threw a breakfast – see above – attended by an anonymous lady dressed only in a barely-discernible thong and the nipple protectors apparently decreed by President Dilma Rousseff. Small Luxury had, like Four Seasons, hosted a lounge area at the show, but other events, say a lunch attended by ILTM’s Portfolio Director Alison Gilmore, turned into temporary rooftop sun-safaris at the Hotel Unique. 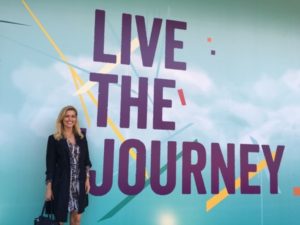 One tip for anyone in São Paulo, any time. If you want to lunch or dine at Hotel Unique‘s always-popular rooftop, either inside or out, book ahead. Apparently there was a two-hour wait for show delegates who wanted dinner one evening. (Other tips for doing business in São Paulo include having a paper or magazine in hand at any noisy cocktail as locals become so passionate they tend to walk closer and closer to you and it is a good idea to have something to hold up, as if to protect your face – I guess a folding fan would suffice.) ILTM had brought in fabulous media, by the way. Champion social media specialist Tiffany Dowd worked the ratings so well that one day she took #travelweekSP up to fifth, WORLDWIDE – she would have been even higher if that had not been Star Wars Day. 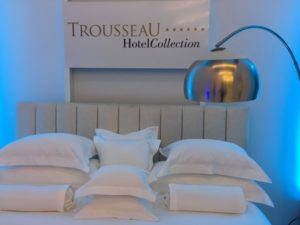 Trousseau bed at the BLTA party

The media were looked after magnificently, and no wonder every top luxury travel writer wants to be invited. One night was a private dinner at the stunning apartment of Eduardo and Ana Gaz, when one of his birthday presents was a two-foot high ski figure completely dressed in Moncler. Another night started at a cocktail, in a new museum, hosted by the 31-member Brazil Luxury Travel Association BLTA, where top sponsors were Chandon, which flowed unceasingly, and Trousseau, the divine and makes-you-feel good bed and bath linen company which supplies, among others, Grand Hyatt São Paulo and, I am told, the just-opened Grand Hyatt Rio de Janeiro. Romeu and Adriana Trussardi Neto, founding owners of Trousseau, had brought along a bed, which judging by the lines waiting to get into the BLTA party as we left, must have been very appealing as the hours wore on. 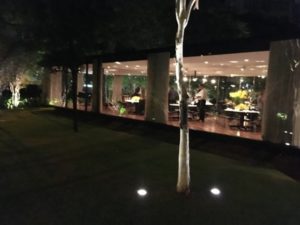 Looking back at Casa Jereissati

We were, however, off to yet another glorious house, a glass-walled villa in Frank Lloyd Wright- style, Casa Jereissati, that had once been private home of Carlos Jereissati, CEO of the massively influential Iguatemi lifestyle empire. It is now used exclusively for extremely special entertaining, and this evening was a great opportunity for ILTM’s Alison Gilmore and her Travelweek São Paulo by ILTM event director, Simon Mayle, to thank some of the show’s top supporters: other guests, therefore, included Virtuoso’s Albert Herrera, and Oetker Collection’s director France, Philippe Perd, plus Celso Valle, who arrived four days ago to start opening Palácio Tangará São Paulo here, for Oetker. NOW TOUR THE EXHIBITION, BELOW, TO GET A FLAVOUR…