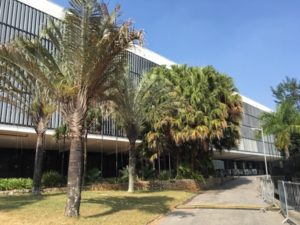 Outside the Niemeyer-designed hall

This was the gal’s first visit to Travelweek São Paulo, the brilliantly successful show started 2010 by Carolina Perez, one of the equally talented travel advising offspring of the magnificently ladylike Brazil Travel queen Teresa Perez. But now it is Travelweek São Paulo by ILTM, and ILTM’s Man In Town, Simon Mayle, is event manager, and he summons the ILTM family to support not only the nearly-500 luxury hotels and other exhibitors but an equal number of top travel advisors, from 11 countries. And, apart from anything else, look at the venue in Ibirapuera Park, the Bienal Pavilion, designed by Oscar Niemeyer for the city’s 400th birthday in 1954. 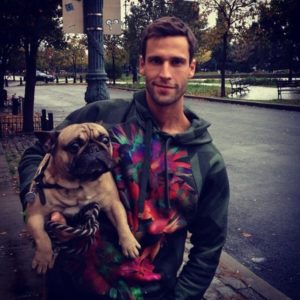 It certainly is a classic building, both inside and out. Last week, for the show, one end became a photo backdrop, as in the photo above. Its lowest level, below ground, holds a mammoth auditorium that just about contained the near-thousand who flocked in for the opening forum. Simon Mayle had brought in a mega star, by the way, Pedro Andrade, a delightful introduction for the foreigners there and a name already more than well-known to all Brazilians. It is a lovely story. He was walking Rio’s Ipanema Beach when photographer Mario Testino asked if had ever modelled – hence the young Carioca who had always wanted to travel but could never afford it found himself heading for photo shoots in Milan, Tokyo, wherever. 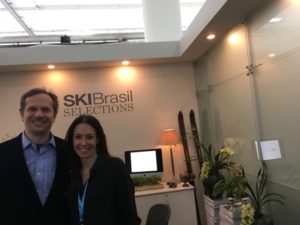 A typical stand, with Eduardo and Ana Gaz

Jump forward and Pedro Andrade, who had actually studied journalism, has his own shows on LXTV, Eldorado FM Station and on his own PedroAndradeTV. As I discovered on this quick return visit to São Paulo, the city is just full of talent. Take Eduardo Gaz, a lawyer who became diverted to organising ski trips, and then happy clients wanted him to organise all travel. His Travel The World TTW Group now owns not only SKIBrasil and Selections, but also SKIUSA, which sells North American ski holidays to Europeans and others. Along the way, Eduardo Gaz married a marketing specialist, helping him with a couple of projects, and now it is Eduardo and Ana Gaz, as a pair, who undoubtedly run one of the coolest travel consultancies in today’s world of style. 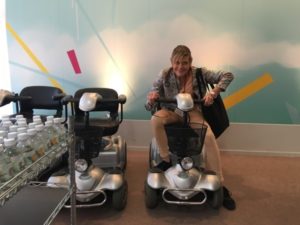 The organisers think of everything

Find Eduardo and Ana Gaz in their home-like office in São Paulo, or their new office in Miami, or hosting YPO parties on the indoor ski slopes of Kempinski Mall of the Emirates Dubai – or find them, with friends, revelling, like me, in what visionary Luke Bailes has done at Singita Ebony Lodge in South Africa’s Sabi Sand. Talking of me, finding yet another form of transport at the luxury hoteliers’ hangout, Travelweek São Paulo, was just too tempting… worth noting that in the first issue of Robb Report UK Fiat heir Lapo Elkann is photographed, wearing scarlet top to toe, in his camouflage-painted Ferrari 458 Italia but Girlahead is happy as a sand-boy on a mobility scooter. BUT FOR REAL FUN, SEE THE FORUM’S DANCE TROUPE, VIDEO BELOW.