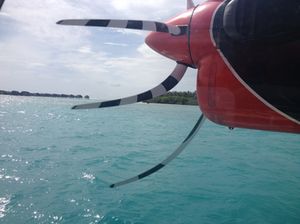 The Maldives is a transport spider-web. This country is not actually a ‘land’ but an area of water 750 km from north to south, 120 km from west to east.   This area is dotted with 26 atolls, in all formed of 1,190 islands, of which only 200 are inhabited. Ergo, want to get to the island that is your luxury resort? You need to fly into Male and connect to – some kind of transport. Outside Male’s arrivals hall there is a nonstop hubbub of meeters, holding boards with your resort’s name, says the gal. You are walked to the dock where dozens of hotel boats wait, or to the domestic terminal for a commercial flight, or you are bussed to the seaplane dock. Maldivian, the domestic carrier, gives you a signed-and-named certificate as you cross the Equator (what a lovely touch). 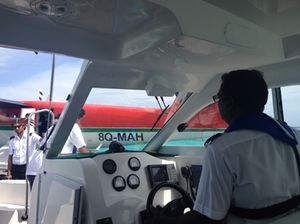 A boat comes up to a seaplane at a pontoon

Seaplanes are now all owned by Blackstone (yes, the people behind Hilton) and they form hoteliers’ biggest nightmare. The schedule is not available until the previous evening and you are just as likely as not to fly to another resort before landing at your final destination. At each stop, the seaplane lands and taxies to a pontoon off-island, and a resort boat, hovering nearby, then comes up and passengers are helped from one mode of transport to another. When the sea is choppy, this can be fun, to say the least. Resort employees also have to be carried, say when going on leave, and when other passengers have heavy suitcases filled with, one presumes, bricks, they are bumped, which is not fun. 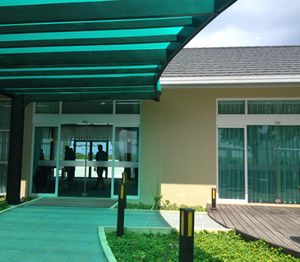 One alternative to all this is to fly direct into Gan, to the far south. Take your own G-8 or whatever and land, without any fuss or bother, and enjoy the facilities of its private jet terminal. Lost your private plane? No problem, take any commercial flight to Gan, 90 minutes south of Male, and if you are booked at Shangri-La’s Villingili Island Resort and Spa, you have the same VIP arrival, and departure. On arrival, you wait in the lounge, with its gigantic sculptures of wood-and-fabric armchairs, until your bags are brought, and you are bussed for all of two minutes to the hotel’s boat, for the six-minute trip to Villingili Island. On departure, reverse the procedure, and rest in another lounge, with normal seating, until boarding. 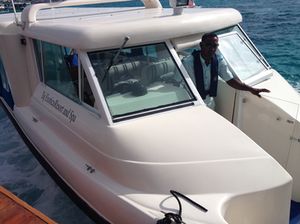 Taj Exotica is only 15 minutes by boat, from Male

The speediest arrival of all, after flying into Male, is to Taj Exotica. Come out of the terminal, walk to the dock, get on the hotel’s boat and within 20 minutes at the most, you have arrived at Emboodhu Finolhu – three coconuts – island. There is barely time for any onboard service, but they somehow manage safety drill, and handing out icy-cold towels, and commercial bottles of water (you soon realise that, throughout the country, these are the only Evians you will probably see as resorts all make their own water, served in china-stoppered glass bottles which are obviously not suitable for potentially-bumpy sea crossings). 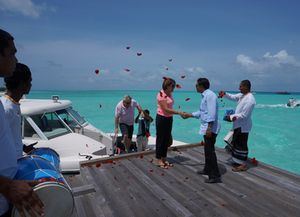 Arrival at Taj Exotica, to drummers and red rose petals

There is barely time, between leaving Male and arriving at the resort’s wood jetty, for the greeting party to assemble. The equally nimble GM of the 62-villa resort, Ranjit Phillipose, and his team have somehow rushed along. As you disembark drummers drum, and real red rose petals are tossed at you in welcome. Since I only saw one single orchid growing on this island, how do they do it? Rose petals are imported by the bushel, rather than the bush, from Bangalore. Ranjit Phillipose may have a degree in history and economics but he is self-taught in creative flair. Before this he was running Taj Falaknuma Palace outside Hyderabad. Arrive there in ceremonial horse and heritage carriage, and as you walk up approach steps dating back to 1892, red rose petals flutter down from an unseen hand above you. 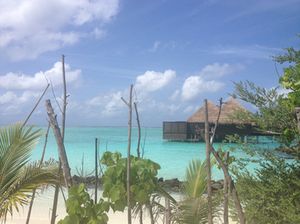 Looking back out to sea

What makes this luxury Maldives resort a rarity? Well, its entirety, all of 750 by 15 metres, sic, is natural, with no added man-made island. Its white sand is not covered in planted undergrowth but, rather, dotted with indigenous trees, many schefflera arboricola, umbrella trees, which bend over at a height of about seven feet to form natural tunnels. And look out to sea, and all you see is pale turquoise with dark blue on the horizon: the shallow lagoon stretches out about 800 metres. It is a wonder that Bollywood stars, say Miss Universe 1994 Sushmita Sen, who spent ten days here with her kids, ever left her overwater villa at all.