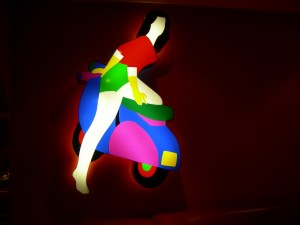 Vespa on the wall, Stoke Park Club, near Heathrow

The gal is flying from London to Singapore as she writes this, so she thinks about transport, getting from A to B and sometimes back again.   She has ridden most vehicles, even a big Hummer though not the electric Hummer she saw in London’s Mount Street the other day.

Come to think of it, she has not ridden a Vespa – next time at The Raleigh, in Miami’s South Beach, she will borrow one of its Vespas, but then the quandary, the lemon mousse colour or the raspberry sherbert?

But she has travelled so many other ways. She remembers her camel rides at the pyramids, when staying at lovely Mena House. 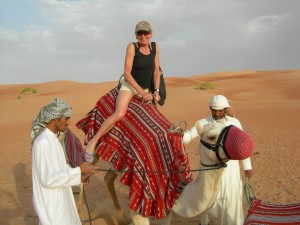 Camel at the Pyramids...

What a history this luxury hotel has – built 1869 as a partridge hunting lodge by a charming spendthrift Ismail Pasha, sold in 1883 to honeymooners Frederick and Jessie Head, sold on to Hugh and Ethel Locke-King who in 1886 opened it the Mena Hotel, then with 80 bedrooms (the General Manager then was Austrian Baron Ernst de Rodakowski, and it not only had a spa but Egypt’s first hotel swimming pool). 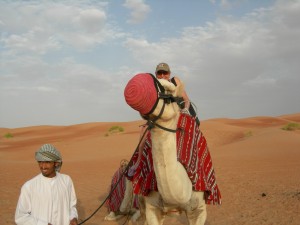 Ten years later the Locke-Kings sold to Mr Schick and Mr Weckel, who added stables, 1904 sold on again…. in 1939 Australian soldiers took it over, in 1943 Chiang Kai-shek, Churchill and Roosevelt met here. In 1952, when Free officers forced King Farouk into exile, the hotel was nationalised.  In 1954, Valley of the Kings shot here – and 1972 Oberoi took over. 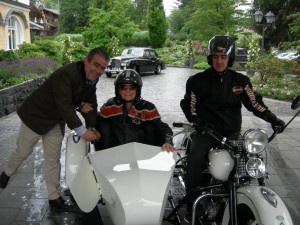 A Harley sidecar, in the rain, for a tour of Gstaad

In Gstaad the gal raged around town in the sidecar of a 1942 white Harley.  It was raining,and she cowered in the open compartment as she only had one pair of trousers (as she always does, as she travels handbaggage, even for cruising).

This beast is one of the prides and joys of Beat Fleischmann, GM of Grand Hotel Bellevue, Gstaad – he also has a 1963 Bentley.  Gstaad made a lot of print-inches in the UK press this last week as the notorious self-appointed pundit Michael Winner went to Gstaad Palace for 12 nights over Christmas and New Year, and wrote it up in his Sunday Times column. 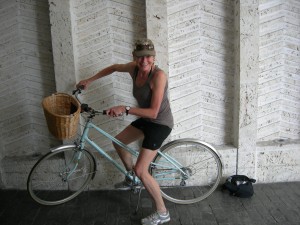 Bicycle at The Setai on Miami's South Beach

He was full of praise for many things, including the superb waitstaff.  Wonder why Winner diverted from his usual end-of-year venue, Sandy Lane?  Swop the swim togs for ski gear, or was he lured by the genuine charm of Gstaad Palace’s owning and hands-on Scherz family. 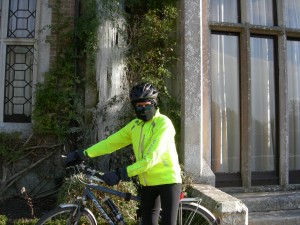 and cycling at home, winter gear...

But it is the push-bike that is the gal’s real love (you note she is not writing about cars per se, having subjected her beloved little vehicle to an unwanted contretemps with a hidden post in the local Waitrose’s carpark, built for Dinky toys (or electric Hummers).

She has cycled at many of the best luxury hotels in the world.  And when at home she cycles, twice a day…