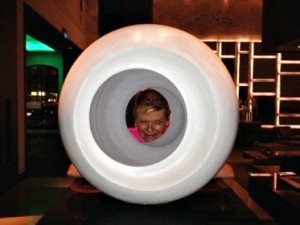 Every luxury hotel should have a built-in photo opportunity in its main lobby, says the gal. At London’s Andaz Liverpool Street, there are at least a couple – open-centred circular sculptures like giant bagels, set at different heights, so choose your preference as a photo frame. This was the first Andaz, all of seven years ago, and it showed how innovative the Hyatt people were then, as now. The lobby is called, and seems like, Living Room, though this has such pop-ups as last Christmas’ walk-through Christmas parcel, not what most have at home. 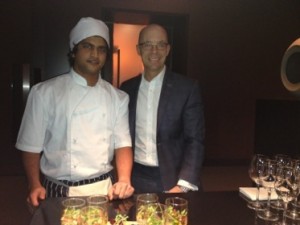 Check-in is done by roving agents (real, not robots) bearing small tablets. They congregate around a home-like refectory table, which has croissants and juice, early morning, and at cocktail hour a chef brings out complementary canapés. An adjacent room has one of those tables by Korean wood artist Jaehyo Lee, made of roughly stacked timbers – see them also on the outside terrace of Park Hyatt Zurich and, inside, at W Seoul Walkerhill. Next to this table, here in London, is a cabinet with help-yourself espresso and soft drinks. 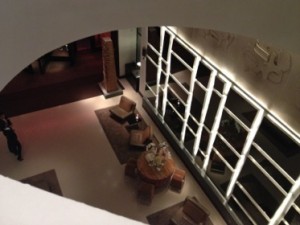 Looking down to the lobby (sorry, Living Room)

The 267-room hotel is ancient and modern, in extremes. The building, by Sir Charles Barry’s son and grandson, opened in 1884 on the site of the Bethlehem Hospital, which served the needy from 1247 through to 1676. The Barry family’s two Masonic temples still exist – one is the basement LifeFitness gym, where the many local members, some with personal trainers, stretch and puff next to the temple’s pseudo-Egyptian columns. Today, from some upper floors, cut-outs enable you to look down into Living Room activity below. . To be really modern, reserve one of the hotel’s Room With A View art-themed rooms (the latest is East My Dust by the ILove Dust studio). 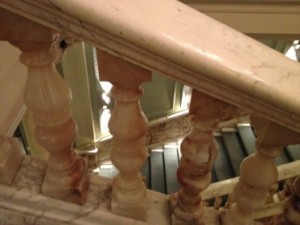 Illuminated signs projected on to public corridors show you how to get to the very-English pub, with its outside entrance so most do not realise they are in a hotel. Those staying over find elevators that are in effect wire mesh cages – the overall design is still Terence Conran, for he was part-owner of the luxury hotel in its previous guise, the Great Eastern. Thank goodness he had the sense to keep the glorious 19th century marble staircases, and moulded cornices.